Two people have died in Kenosha, Wisconsin, after gunfire erupted as protests over a recent police shooting of a Black man continued for a third day. At least one other person has been injured. 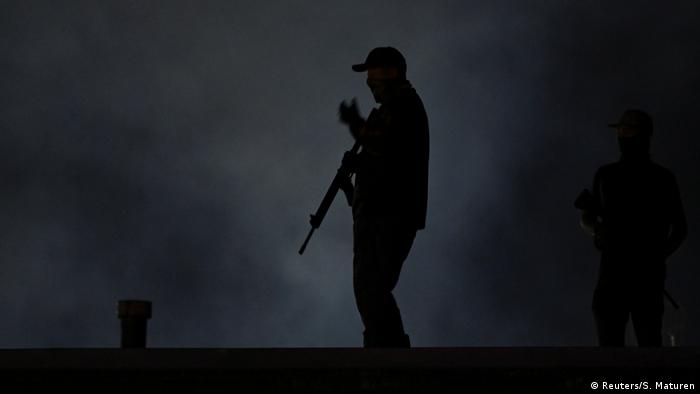 Two people were killed and another injured in Kenosha, Wisconsin, local police confirmed Wednesday, after gunfire broke out on the third night of unrest following the police shooting of Jacob Blake, a Black man.

The Kenosha Police Department on Twitter confirmed they had responded late Tuesday to reports of gunfire.

Reporting from Kenosha, DW's Stefan Simon confirmed the state of chaos and violence on the ground.

"We saw protesters run toward us and toward police ... screaming at police for help, encouraging them to rush down to the scene," Simon said.

Witnesses described a "militia-type" person who shot a protester in the head, he added.

Footage of the incident is reportedly circulating on social media. The videos show civilians in Kenosha running through the streets as gunshots ring out. Injured men can be seen lying on the ground.

It was the third night of protests and acts of destruction in the Midwestern US city of 100,000.

Kenosha police officers on Sunday shot 29-year-old Blake several times in the back as he tried to get into the SUV where his children were sitting.

Blake's attorney on Tuesday said his client is paralyzed and that it would "take a miracle for him to walk again."

Police on Tuesday fired teargas for the third night in a row in an attempt to disperse protesters gathered outside the city's courthouse. Some demonstrators threw bottles and fireworks at officers stationed behind a protective fence. Police then used armored vehicles and officers with shields to push back the crowds, after protesters ignored orders to leave a nearby park.

An 8 p.m. curfew is in effect in the city. Wisconsin Governor Tony Evers has declared a state of emergency and doubled the deployment of National Guard forces in Kenosha from 125 to 250.

Police and protesters also clashed in Portland, Oregon, and Louisville, Kentucky, on Tuesday night, a continuation of nationwide anti-racism and police brutality protests sparked by the killing of George Floyd, a Black man killed by police in Minneapolis on May 25.

Outrage at shooting of unarmed Black man by police in Kenosha, Wisconsin