US: Wisconsin governor declares emergency ahead of new protests

Wisconsin Governor Tony Evers warned against the path of "damage and destruction" as Kenosha faces escalating unrest over the police shooting of Jacob Blake. The Blake family lawyer said he may never walk again. 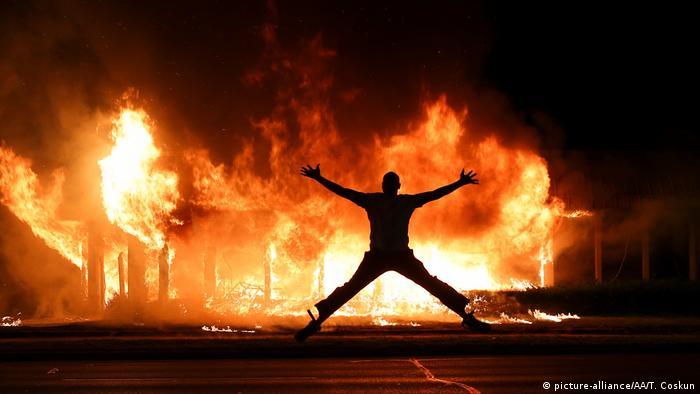 Wisconsin Governor Tony Evers declared a state of emergency on Tuesday after multiple instances of violent protests in the city of Kenosha where Jacob Blake, a Black man, was shot multiple times by the police.

Governor Evers called on protesters to be peaceful while announcing that he would double the presence of the Wisconsin National Guard from 125 to 250 after crowds clashed with law enforcement officers, vandalized businesses and set dozens of buildings on fire the previous night.

"We cannot allow the cycle of systemic racism and injustice to continue," Evers said in a statement. "We also cannot continue going down this path of damage and destruction."

Kenosha is likely to see protests for the consecutive third night after the family lawyers of Jacob Blake, who is being treated at a hospital in the city of Milwaukee, said he is paralyzed.

They said one of the policeman's bullets shattered Blake's spine and others damaged his stomach, colon, liver, and an arm.

"It's going to take a miracle for Jacob Blake Jr. to ever walk again," said attorney Ben Crump. 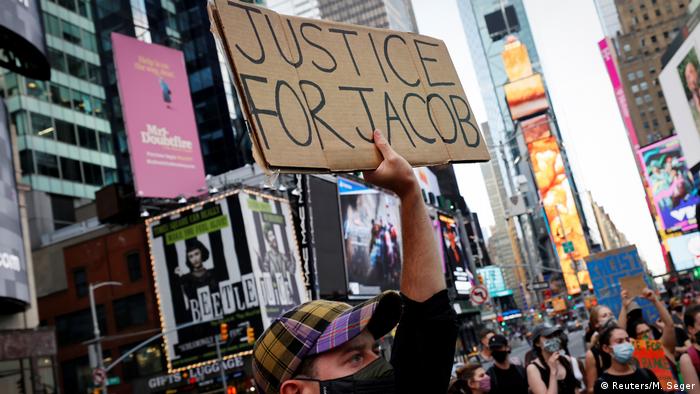 The police shooting of Jacob Blake sparked protests across US cities, including Los Angeles and New York

Children in the car

A video posted on social media showed unarmed Jacob Blake, being shot multiple times by police in Kenosha on Sunday while getting into his car. Blake's partner, Lacquisha Booker, confirmed to local television that their three sons were in the vehicle during the incident.

The shooting sparked protests across Kenosha and soon spread to other cities, including Los Angeles, New York, and Minneapolis, which was the epicenter of the Black Lives Matter movement this summer after the police killing of George Floyd.

Officials are bracing for a repeat of the Monday night violence which saw hundreds of protesters defying the dusk-to-dawn curfew to demonstrate against what is the latest instance of police violence against African-Americans.

In anticipation of fresh violence, authorities in Kenosha on Tuesday installed a temporary iron fence in front of the county courthouse which has been the scene of confrontations between police and protesters the last two nights.

Julia Jackson, Jacob Blake's mother, also appealed for calm. "As I was riding through this city, I noticed a lot of damage," Jackson said at a press conference.

"It doesn't reflect my son or my family," she said. "If Jacob knew what was going on as far as that goes, the violence and destruction, he would be very unpleased."

"I really ask you and encourage everyone in Wisconsin and abroad to take a moment and examine your hearts," Jackson said. "Do Jacob justice on this level… As I pray for my son's healing physically, emotionally, and spiritually, I also have been praying even before this for the healing of our country."

The Blake family has a scheduled call with Governor Evers, as their attorney demand arrest of the police officers who shot Blake.

The lawyer also said they will bring a civil lawsuit "to hold wrongdoers accountable."

The shooting is under investigation by the Wisconsin Department of Justice which has not released any details of the case so far. The two officers involved have been placed on administrative leave. Blake's father, however, said he does not have confidence in the investigation.

Clyde McLemore, president of the Black Lives Matter chapter in nearby Lake County, Illinois, said demonstrators would be out again on Tuesday night, demanding the police officers involved in the shooting be fired, and prosecuted.

"We won't stop protesting until we get that done," he said. "I don’t condone (the) burning of buildings or looting, but I understand it. Them places got insurance, they'll be back up."

Hundreds of people marched again on Tuesday, and at least one small group of mainly white, heavily armed men vowed to protect property.

The group, calling themselves the "Armed Citizens To Protect Our Lives And Property," said they were there to protect buildings from more damage Tuesday.

A former Kenosha alderman, Kevin Mathewson, with a handgun on his hip and an AR-15 assault rifle strapped across his body, said the shooting of Blake "sickened" him — but that he wanted to defend his community.

"Some do not realize by burning a building you are risking the lives of first responders and anyone who may be inside," he said, adding that he was armed to protect himself from others with guns.