The incumbent US president is hoping to win a second term in office as the presidential race heats up. Breaking with tradition, Trump used the White House as a political backdrop and defied coronavirus guidelines. 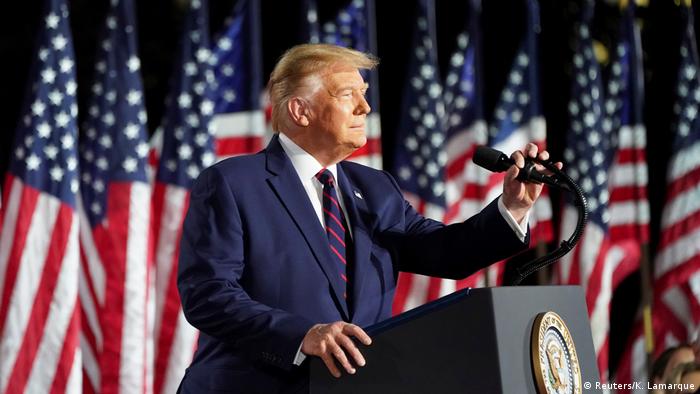 US President Donald Trump on Thursday brought the Republican National Convention (RNC) to a close by accepting his Republican Party's nomination for president.

In a speech delivered from a huge stage on the White House front lawn he said he did so with a "heart full of gratitude and boundless optimism," and described the upcoming election as "the most important in the history of our country."

In an attack on his Democrat rival Joe Biden, he said there had never been "a clearer choice between two parties, two visions, two philosophies," he said, going on to describe the Democrat agenda as "the most extreme set of proposals ever put forward by a major party nominee.''

What else he said

Vowing to defeat the coronavirus pandemic, Trump said that the US would have a vaccine ready "by the end of the year, or maybe even sooner."

He pledged the country would see "record prosperity" if he was reelected and promised to "again rebuild the greatest economy in history."

And, referring to unrest over racial inequality, he said no president had done more for African-Americans and promised that "the best is yet to come."

Watching on, DW's Ines Pohl said that although many things Trump said weren’t true, he could have played to undecided voters by "delivering the idea that he has a very clear plan on coronavirus, the economy, and taking on China, whereas Biden didn’t."

The location of Trump's speech broke tradition and regulations of not using the White House mansion for purely political events.

There was no social distancing in place for the crowd sat watching the speech and face masks were not required.

Only people expected to be closest to the president and vice president had been tested for COVID-19.

His acceptance follows days of unrest in Wisconsin, sparked by police officers shooting an apparently unarmed Black man Jacob Blake in the back multiple times as he got into his car in the city of Kenosha.

Trump's renomination also comes amid the coronavirus pandemic that has hit the country hard. The US has the world's highest-recorded number of infections at over 5.8 million and the largest death toll in the world at over 180,000.

What else happened during the RNC?

He defended police and called for an end to unrest in cities where violence broke out following anti-police demonstrations. "Under President Trump, we will always stand with those who stand on the thin blue line."

He added: "We're not going to defund the police. Not now, not ever.''

A larger number of Black speakers spoke at the convention, including Kim Klacik who is running for a seat in Baltimore, Housing and Urban Development Secretary Ben Carson and highest-ranking Black staffer in the White House Ja'Ron Smith.

Smith said on a speech Thursday that he wishes everyone else could see the "deep empathy'' that Trump shows families whose loved ones were taken by senseless violence.

At a fundraiser on Thursday, Biden said Trump had used the specter of violence as a "political strategy," rather than actually aiming to address it.

"Donald Trump keeps saying it won't be safe in Joe Biden's America," he said. "Their proof? The violence you're seeing is in Donald Trump's administration, Donald Trump's America. Did they forget who's president?"