March on Washington: Thousands protest racism in US capital

This year's march to commemorate the anniversary of Martin Luther King Jr's "I Have a Dream" speech comes at a time of widespread outrage over police violence in the US. Tens of thousands gathered to call for justice.

'He became the moral compass of Congress'

People from across the United States traveled to the US capital on Friday to protest against racial inequality and commemorate the anniversary of Martin Luther King Jr's 1963 march on Washington.

The protest, which marks the anniversary of the civil rights leader's famous "I Have a Dream Speech," comes at a time of civil unrest in the US — sparked by outrage over police violence and the treatment of Black people in the US.

Martin Luther King III, son of the late activist, said, "There is a knee upon the neck of democracy and our nation can only live so long without the oxygen of freedom. Our strength must be exercised by more than rhetoric and more than marching." He urged people to vote during the upcoming elections in November.

DW's Carla Bleiker reported that tens of thousands gathered to listen to speeches at the Lincoln Memorial by the early afternoon.

DW’s Washington correspondent Ines Pohl described events as "very emotional" and a "historic moment in the history of the US."

"Many of the people we talked to were not only disappointed in President Trump, but also in his predecessor Barack Obama," Pohl said. "At how little they feel the first African-American president was able to do to fight and change the deeply rooted racism in the political and police system."

'I hope for justice'

Nationwide protests were sparked this summer by the death of George Floyd, an unarmed Black man who died after a Minneapolis police officer kneeled on his neck for nearly nine minutes.

Outrage over Floyd's death and racial inequality spread into a global movement, with marches in Berlin, London, Paris and other cities.

"I planned this trip a month ago. I got here a little after 6:00 a.m. but I didn't get much sleep last night. I hope for justice. I came to take the messages back home," Gardner, a 47-year-old Black woman from Cincinnati, Ohio, told news agency AFP. 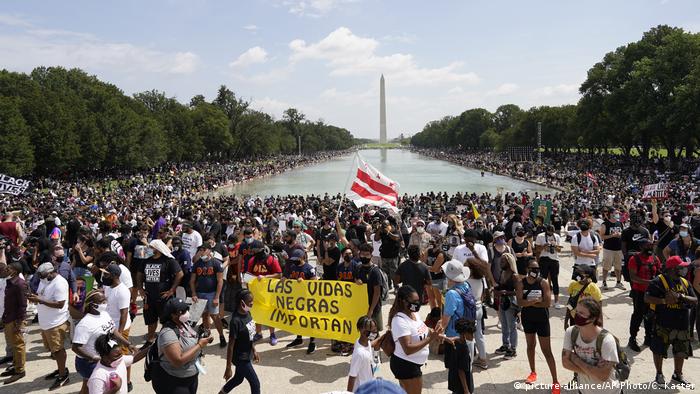 People from across the US travelled to Washington to demonstrate

Tensions flared again this week in the city of Kenosha, Wisconsin after a white police officer shot Jacob Blake, a Black man, multiple times in the back in the presence of his young children. Blake survived the shooting but is paralyzed, perhaps permanently, his lawyer said.

During the tumult of the protests that followed Blake's shooting, two people shot dead by a teen with an assault rifle. A 17-year-old white male was arrested over their deaths.

Testing and temperature checks on site

US President Donald Trump  has been criticized for downplaying the coronavirus pandemic and for dismissing the nationwide anti-racism protest, only ever addressing looting or violence, rather than the underlying causes of the unrest.

Black people in particular have suffered disproportionately from the COVID-19 pandemic, which has further laid bare the social and health inequalities in the United States. They were also more likely to experience job losses from the economic fallout.

Friday's organizers said they were taking the pandemic into account by distributing masks, checking temperatures, and providing free COVID-19 testing. Staff from Rev. Al Sharpton's National Action Network wiped down the podium and microphones between speakers.

The force used against Blake appeared "excessive," said a UN spokesman. Robert Colville also spoke of the "lax" gun laws in the US contributing to the murders of two people who were shot dead in the ensuing protests.