John Lewis — Remembering a US hero in struggle against racism | World | Breaking news and perspectives from around the globe | DW | 26.07.2020

Getting into 'good trouble' – On John Lewis' legacy

Congressman John Lewis fought his whole life for a country free of racism. He was one of the key figures of the US civil rights movement, and his nonviolent struggle was often considered his most powerful weapon.

"John put his life at risk several times in the hope of changing our country," says Dr. Charles "Chuck" Neblett, who in 1965 marched alongside Lewis across the Edmund Pettus Bridge — a nonviolent protest in Selma, Alabama that ended in a bloodbath and became one of the defining events of the 1960s civil rights struggle.

"What motivated me and many others at the time to join the antiracism fight led by John Lewis and Martin Luther King was the murder of a 14-year-old Black American named Emmett Till. He was lynched by white men — simply beaten to death," recalls Dr. Neblett, who is now 79 years old. 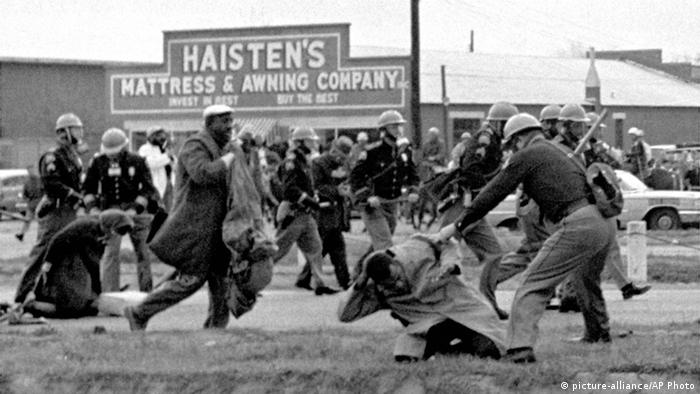 The protest in Selma, Alabama, became known as "Bloody Sunday"

According to the civil rights organization NAACP, 3,446 Black Americans were lynched between 1882 and 1968. There were rarely any investigations or punishments for the perpetrators

But the murder of Emmett Till in 1955 marked a turning point, bolstering the movement against racial segregation, and Neblett sees a similarity today to the case of George Floyd.

"This country hasn't really changed," he said. "It's a systemic racism that still exists in the US. Black people continue to be killed for no reason. Floyd's killing has outraged and shocked people just as much as Till's death did in the 50's — that's why people are marching on the streets again," he says, before adding, "But it's important to keep John Lewis' words in mind: He has taught us to approach the protest as a nonviolent action. That is his most important heritage."

Neblett joined the movement in 1961 when he became a member of the Student Nonviolent Coordinating Committee (SNCC) at Southern Illinois University. At that time, Black Americans continued to be the target of racial segregation in the southern states.

"It was a terrible time, just inhumane," Neblett remembers. "When you went to a restaurant at the time you could expect anything. People might come in and just beat you up, put you in jail - but we had to take it nonviolently. John Lewis was one of the first men to believe in nonviolence despite the violent racism he experienced himself."

Read more:Black in the US targeted by an unfair justice system

Protest as a way of life

One of John Lewis' last tweets confirms Neblett's words. At the end of May this year, amid the protests surrounding George Floyd's murder, Lewis wrote: "I know your pain, your rage, your sense of despair (...) Rioting, looting and burning is not the way. Demonstrate. Sit-in. Stand-up. Vote. Be constructive, not destructive."

Neblett also accepted nonviolent protest as a way of life. While in the SNCC, he co-founded a political music group named the "Freedom Singers," who rapidly gained popularity and whose performances became an important source of funding for the SNCC. Protesting through music — that became Neblett's specialty, which is why he has always been involved in major protests and events.

This was also the case in 1965, when John Lewis led the famous march of around 600 African Americans across the Edmund Pettus Bridge. "As we were standing in the middle of the bridge that day, I saw all these state troops," recalls Neblett, "I knew then that there would be big trouble, but that we had to keep on walking. Some got on their knees and prayed, I kept my eyes wide open. Then everything went very quickly."

Televised footage from that day shows how policemen and state troops began beating nonviolent protesters with their sticks. "Suddenly we were in the middle of a bloody mess ... you could only hear people screaming everywhere. It was a massacre," says Neblett, who got away with minor injuries. 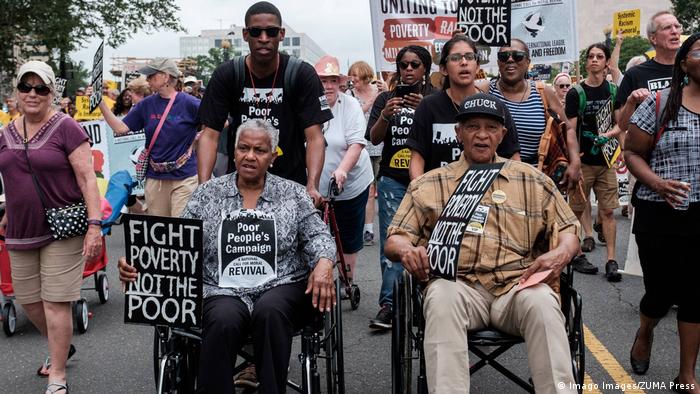 John Lewis, on the other hand, suffered his worst injuries during this march. He was in the intensive care unit for several days. The images of police officers beating him and other unarmed protesters triggered a political dynamic in the United States that ultimately granted African Americans the right to vote. That day went down in history as "Bloody Sunday."

Today Neblett is concerned about the images he sees from Portland, the protesters and the response of federal security forces deployed by President Donald Trump. "Trump is increasingly sending state troops to states where protests are taking place. I think this is getting really rough - even worse than in 1965. You see, back then we were fighting racists who had no direct support in the White House – this time it's different."

Dr. "Chuck" Neblett describes himself as an optimistic person, a doer. That's exactly what he also admired about John Lewis: "He talked the talk and walked the walk. He was my hero in the struggle."

But still, there is a very specific song from back then, says Neblett, he just can't help to think about it again and again these days:

The death of African American George Floyd at the hands of a white police officer reignited a global protest movement. But demonstrations alone will not bring the change society desperately needs, says DW's Yann Durand.

The Minnesota police reforms include a ban on choke holds similar to one used on the late George Floyd. The reforms are seen as some of the most substantial changes to the state's criminal justice system.

Getting into 'good trouble' – On John Lewis' legacy