Malta′s Joseph Muscat at the precipice over journalist murder | Europe| News and current affairs from around the continent | DW | 01.12.2019

Malta's Joseph Muscat at the precipice over journalist murder 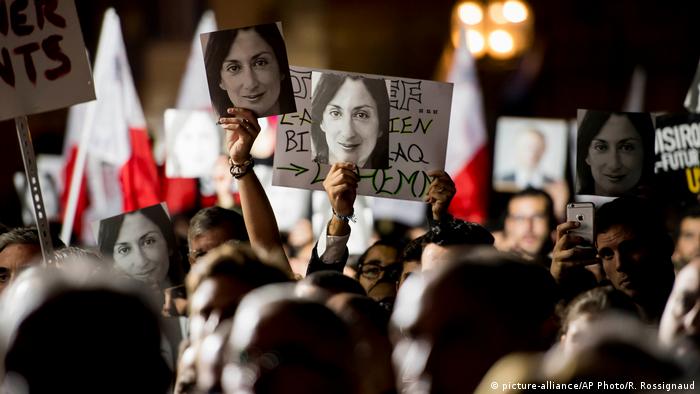 The uproar triggered by the 2017 murder of blogger Daphne Caruana Galizia shows no signs of abating in Malta, where Prime Minister Joseph Muscat faced immense public pressure to resign on Sunday. Thousands of people marched in Malta's capital, Valletta, demanding his immediate departure.

Muscat once pledged to leave "no stone unturned" until Caruana Galizia's killers are brought to justice. However, the investigation surrounding the case has now reached Muscat's trusted aide and chief of staff Keith Schembri, with another high-level suspect naming Schembri as a "real mastermind" behind the assassination.

Schembri resigned and was interrogated by the police earlier this week. He has denied any connection with the murder.

The country's tourism minister, Konrad Mizzi, also resigned, while Economy Minister Chris Cardona said he was "suspending himself" after the police announced they would be renewing their probe into the car bombing.

The 53-year-old Caruana Galizia made her reputation decrying corruption and going after senior leaders from both main parties, Muscat's Labor and the rival Nationalists, on her blog. This put her in conflict with nearly all prominent Maltese politicians.

After analyzing the 2016 Panama Papers trove and reportedly receiving information from an insider at Malta's Pilatus Bank, Galizia accused Muscat's wife, Michelle, of owning a stake in a shell company that engaged in large-scale money laundering. The reporter also claimed the prime minister's spouse maintained an offshore account and received $1 million from the daughter of Azerbaijan's president.

The Maltese prime minister slammed the story as a "totally outright lie" and "fake news" in the European Parliament in 2017, four months before Caruana Galizia was assassinated.

Other information on Galizia's blog indicated links between Cabinet member Mizzi and Muscat's aide Schembri, and a Dubai corporation, 17 Black, owned by Maltese oligarch Yorgen Fenech. Schembri and Mizzi eventually admitted to having undeclared offshore companies in Panama, but have denied any wrongdoing.

'There are crooks everywhere you look'

"Mr. Schembri is claiming that he is not corrupt, despite moving to set up a secret company in Panama along with favorite minister Konrad Mizzi," Caruana Galizia wrote in her final blog post on October 16, 2017.

"There are crooks everywhere you look now," she added. "The situation is desperate."

Within an hour, she left her rural home in northern Malta and was killed by a bomb planted under her rental car. The explosion was forceful enough to throw the car off the road and into a field.

Muscat quickly condemned the assassination as a "barbaric act" and pledged to do everything in the search for her killers. Teams from the US-based FBI and EU's joint Europol were deployed to the island nation to help with the investigation.

In December 2017, a group of suspects was arrested and three men charged with Caruana Galizia's murder. Prosecutors said that two of them were monitoring the reporter and notified the third after she drove out of her home. The third suspect then allegedly activated the bomb by sending a text message from a boat.

However, prosecutors were unable to track down the organizers and masterminds behind the car bombing, and the investigation quickly stalled.

It was only jolted into life again last month, when Maltese police arrested several people over a high-profile money laundering scheme. The clampdown was executed with the help of Interpol.

One of the suspects, identified as a local loan shark Melvin Theuma, then tried to use his information about the assassination as leverage to get a presidential pardon. Muscat agreed and promised a pardon if the suspect, who claims to have served as a middleman in the plot, could lead the authorities to the mastermind.

A day later, Maltese police intercepted and arrested oligarch Yorgen Fenech while he was apparently trying to flee the island on his yacht. In addition to owning 17 Black, the company reportedly behind payments to Schembri and Mizzi, Fenech is also a director and a co-owner of Electrogas, the energy company involved in the 2013 construction of the Delimara power plant.

According to emails published by Caruana Galizia, millions in taxpayers' money have been siphoned off by middlemen in contracts for energy production in Delimara.

After his arrest, Fenech tried to obtain the same deal given to the alleged middleman and officially asked for pardon in exchange for cooperation on the murder. According to police sources, the businessman named Schembri as the "real mastermind" behind the hit.

Muscat denied Fenech's request for pardon. However, Fenech's lawyers said the prime minister should not be the one to decide on the request, because he may be among "persons who may have an interest for such a pardon not be granted."

The son of the murdered reporter, Matthew Caruana Galizia, also accused the prime minister of "behaving as if he is the defense lawyer of his chief of staff."

"Our position, unequivocally, is that [Muscat] has to go," the son, himself a reporter, told DW.

This week, the Times of Malta reported that ministers and parliamentary secretaries discussed a letter, allegedly sent by Schembri, that was passed on to Fenech in police custody. Citing multiple unnamed sources in the cabinet, the paper claims that Schembri instructed Fenech to pin the crime on Economy Minister Chris Cardona.

Schembri has denied any connection with the letter.

Daphne Caruana Galizia: The woman who 'broke the mold'

A dedicated investigative journalist and fearless fighter for human rights, Daphne Caruana Galizia would have been 55 on August 26, 2019. Remembering her talents two years after she was murdered for her work.  (23.08.2019)

Tourist routes, the justice system and Maltese history intersect where activists set up a memorial to push for answers in the murder of Daphne Caruana Galizia. One year on, authorities have tried to remove it from sight. (15.10.2018)