Prosecutors have charged three men with murder for the car bomb killing of a Maltese journalist. The anti-corruption blogger Daphne Caruana Galizia was killed while driving near her home on October 16. 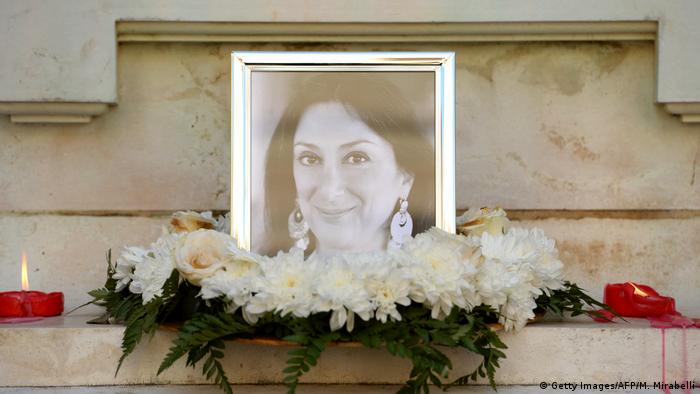 Prosecutors have charged three men with the murder of Daphne Caruana Galizia, Maltese media reported on Tuesday. The 53-year-old journalist died when a bomb tore through her car on October 16 — a killing that shook the EU's smallest member state and raised Europe-wide concerns about the rule of law in the Mediterranean island country.

Under tight security in Valletta, the suspects, Vince Muscat and brothers Alfred and George Degiorgio — all of whom have criminal records — pleaded not guilty to charges that include the possession of bomb-making material and weapons. Police did not immediately make clear whether they believed that the men had acted under contract to carry out the murder or plotted it on their own.

The court remanded the three accused, arrested along with seven others on Monday morning, in custody. The magistrate upheld a request to freeze their assets as well. Authorities did not immediately make clear the fate of the other seven men held.

Caruana Galizia had written a popular investigative blog that accused some of Malta's most prominent figures — right up to Prime Minister Joseph Muscat, not a relative of the accused Vincent Muscat's — of graft.

One prominent European MEP has described his despair after meeting the family of murdered journalist Daphne Caruana Galizia. He was among multiple lawmakers who demanded an international investigation into the killing. (24.10.2017)

Malta: Businessman could face life in prison for journalist's murder 18.08.2021