The EU Commission has told Malta its investigation into the murder of Daphne Caruana Galizia should leave "no stone unturned" as the funeral of the journalist took place. Politicians she probed stayed away. 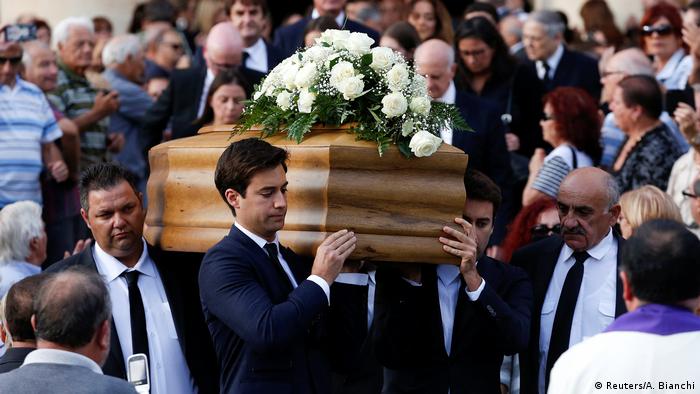 Hundreds of mourners attended the funeral on Friday of Daphne Caruana Galizia, Malta's best-known blogger and journalist and a fierce critic of government and opposition figures. The Mediterranean island observed a national day of mourning as the ceremony took place in Mosta, a town close to the rural home where her car was blown apart.

European Commission Vice President Frans Timmermans said Europe's "eyes" were on authorities in Malta where democracy was at stake after the "atrocious" car-bomb murder on October 16.

EU headquarters flew flags at half-mast in honor of Caruana Galizia and "all those who have given their lives for the freedom of speech." On Malta itself a day of national mourning had been declared. 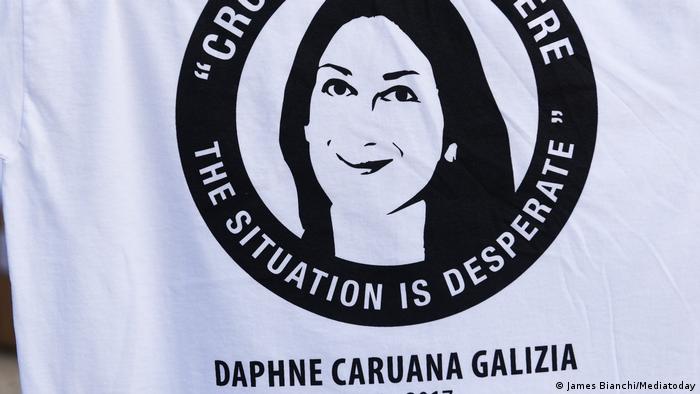 Timmermans, a former Dutch foreign minister, demanded that the murder investigations "run their full course" to expose wrongdoings and "potential structural problems," in defiance of perpetrators who he said had intended that "no one dare to ask pertinent questions."

"This will not happen in Europe. Not on this Commission's watch," said Timmermans, referring to corruption and money laundering allegations directed by the 53-year-old Caruana Galizia at public figures.

The funeral was led by Maltese Archbishop Charles Scicluna, a well-known figure from his years of service as a prosecutor in the Vatican's sex crimes office.

"Whoever took part ... I have this to tell you: However hard you try to evade the justice of men, you will never escape from the justice of God," he told the congregation.

European Parliament President Antonio Tajani was among foreign dignitaries to attend. After the funeral, he demanded to know who had killed Caruana Galizia, saying: "I want to know the name of the killer, as well as the mother and father of this heinous crime."

National figures had said they would stay away. The office of Maltese Prime Minister Joseph Muscat, who like opposition politicians was probed by the blogger, said Caruana Galizia's family had "made it widely known that it does not wish the state authorities to attend."

A spokesman for Malta's President Marie-Louise Coleiro Precau said her presence was also "not desired."

The government has offered a €1 million ($1.2 million) reward for information leading to the killers. However, neither arrests nor major leads have yet been made public despite help from the FBI and Dutch forensic experts.

Last Sunday, an estimated 10,000 people staged the second major post-murder demonstration in Sliema, a beach haven near the capital, Valletta, to press demands that Malta's chief of police and prosecutor general be replaced by parliament to restore public confidence in Malta's administration. 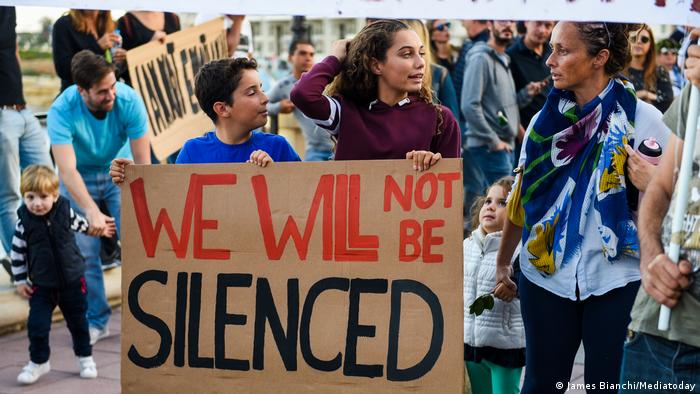 Protesting in Sliema last Sunday, thousands of Maltese said the murder would not silence them

On Friday, the heads of eight European and American media outlets, including Britain's The Guardian, Germany's Süddeutsche Zeitung and France's Le Monde, urged the EU executive to use "all powers" at its disposal.

This was necessary, they said, to "send a clear signal of support to journalists working in the public interest, in Malta and all over the world."

In her last blog post, shortly before she was murdered, Caruana Galizia said: "There are crooks everywhere you look now. The situation is desperate."

Inside Europe: 'She was a fearsome journalist...'

Visiting Malta earlier this week, the head of Italy's anti-mafia parliamentary commission, Rosy Bindi, urged Maltese authorities to fight organized crime, which she said had found a "hospitable" home on the island because of its shady financial regulations.

"The fact that they hit a woman who did investigative journalism is proof that sometimes they're more afraid of a pen than a pistol," Bindi said.