′Little Britain′ in Germany′s Rhine region lives on borrowed time | Germany | News and in-depth reporting from Berlin and beyond | DW | 02.08.2018

Brexit prompted Gary Blackburn to open "Little Britain," a whimsical exhibition of Britannia high above the Rhine. It was to be a place where Germans and Britons could come together. The local council wants it gone.

You do feel a bit like you've entered Wonderland when you come upon "Little Britain." A pig in blue coveralls, stationed next to a red phone booth beckons you toward "Blackburn's Way." Statues of Alice and the Mad Hatter, Peter Rabbit and Robin Hood, iconic figures of British literature, poke out among the flowers and benches that line the path. Queen Elizabeth takes shelter in a pavilion alongside her corgis as Merlin the Magician balances a crystal ball in his hand.

This is the realm of Gary Blackburn, an English tree surgeon who set up shop in the Westerwald region, a 30-minute drive south of Bonn, more than two decades ago. If you know where to look, you can just catch a glimpse of red from the double-decker buses through the trees as you drive up into the hinterlands above the river Rhine. But you're more likely to simply come upon Little Britain while walking along the picturesque, meandering trail to the old brewery in the Kasbach Valley.

And it will likely prompt you to think about Brexit, or about kitsch, or about what drives a man to spend hundreds of thousands of euros and almost as many hours to create his own quirky open-air park out in the sticks. 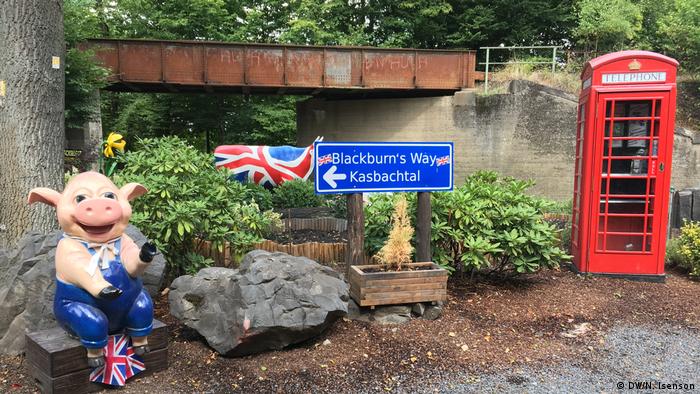 Blackburn built up the exhibition over time

"The idea came from Brexit," says Gary Blackburn. "Brussels didn't talk to London. I've done it for the English and German relationship after Brexit, so people talk together."

In the roughly two years since he began, Little Britain has grown into a local curiosity. On a sunny summer weekend, a few hundred people may stroll through the exhibition, which is open for free to the public.

"It's all for nothing," says Blackburn.

The clearance order the Blackburns received in early July is big news out here in the German countryside. The local authorities said they had until the beginning of August to remove nearly everything from the area and erect a gate to keep people out.

"I don't see any reason why this should go," says a tanned 60-year-old man from a nearby town. He says he has come to see for himself what the problem is.

"It's a pretty site. Neat and tidy. I could see if people were making noise and getting drunk and partying," the man says.

Read more: Would Margaret Thatcher be on favor of Brexit?

The exhibition is on private property registered to Gary's wife, Monika, right next to where the couple lives with their youngest children and he has his business. But they don't have a building plan or building permits for the many items that make up the exhibition. The situation is complicated by the fact that they are leasing an additional strip of land next to their property — and to Little Britain — from the local municipality. And then there is the tank. 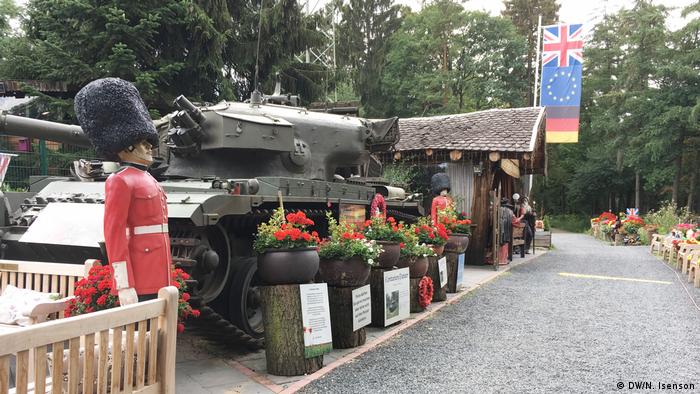 Blackburn's father gave him a toy tank of the same model when he was a boy. He keeps it in his office

Last year Blackburn bought and installed a 52-ton British tank. That drew national — and some international — attention. It was briefly an issue in the Rhineland-Palatinate state parliament. His immediate neighbors complained, telling local media the exhibition was tasteless and that it put off clients at their consultancy next door. They were unwilling to speak to DW about it.

"I put the tank there as a monument to freedom and peace," Blackburn says. "People shouldn't forget about things."

The tank is decorated with poppies and doves and flanked by large posters of the famous World War I poem "In Flanders Fields" in the original English and German. 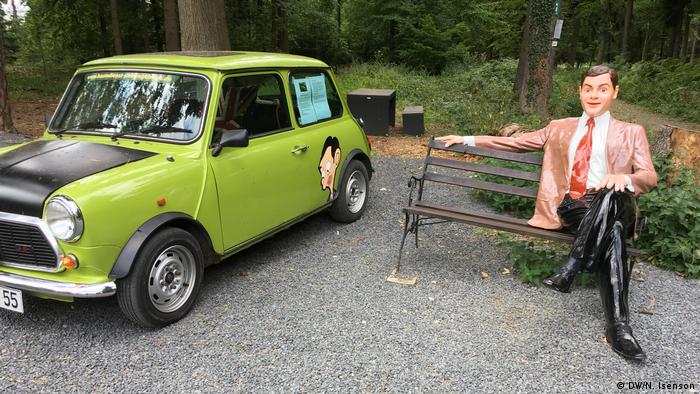 Mr. Bean and his Mini are parked at the start of the forest trail

Blackburn apparently needs a permit for the tank because it is stationary and is not recognized officially as a memorial. He did find a company that would build a motor for the tank that he could run using solar power from his house. That would make the tank mobile and eliminate that permit problem.

But it doesn't take care of the rest of the exhibition: Before he began erecting the pavilion, huts, vehicles and statues in 2016, he was supposed to submit a plan to the authorities for approval.

"I was going to get dual nationality," he says. "It makes me want to change my mind. I've got all the paperwork, but it's still on the table."

'Play by the rules'

There is, however, hope for Little Britain.

Locals have rallied to defend it. A man from a nearby town launched a petition in mid-July, calling for the clearance order to be withdrawn. It garnered more than a thousand signatures within days and has since been submitted to the district administrator and the local mayor, whose council stands behind the clearance order. The petition has no binding consequences, but it does show that many of Blackburn's neighbors want Little Britain to stay. In the meantime, the Blackburn family has managed to get the deadline to shutter Little Britain postponed until mid-September. The next step is a meeting that the district administrator, Achim Hallerbach, set up to bring together Blackburn and the mayor.

"The tank, using the property from the municipality, the row with the neighbors, misinformation, custodianship — so much has come together," says Hallerbach. Blackburn and the mayor need to sit down and talk, he stresses. Little Britain is something playful. You can take it or leave it, but what the heck? You have to play by the rules though, he says.

Hallerbach is sanguine. "I have a solution in mind," he admits, but he won't say more. We'll have to wait until September, he says.

Then Blackburn and his neighbors will see whether Little Britain can carry on or go the way of Britain's membership in the EU.

Amid the daily UK political turmoil, one name sticks out. The European Research Group is a lobbying entity pushing for a no-nonsense, hard Brexit. Some say it is essentially running the show, not the British government. (27.07.2018)

Brexit fears have prompted Brits in Germany to push to secure their rights. Their future looks uncertain as negotiations reach crunch time, and the chance to become dual nationals trickles away, Sarah Bradbury reports. (13.09.2017)

Nestled along a hiking trail in the forests above the river Rhine sits "Little Britain." Englishman Gary Blackburn started his quirky exhibition after the Brexit vote to foster good relations between Germans and Brits. (02.08.2018)

WorldLink: Walking in the footsteps of history