Lauded abroad on refugees, Merkel wobbles in domestic polls | Germany | News and in-depth reporting from Berlin and beyond | DW | 28.09.2015

Angela Merkel's stance on refugees has boosted her international profile so much she claimed a "thank you" from U2's Bono. But at home, her bulletproof position in the polls has begun to slide. Why? 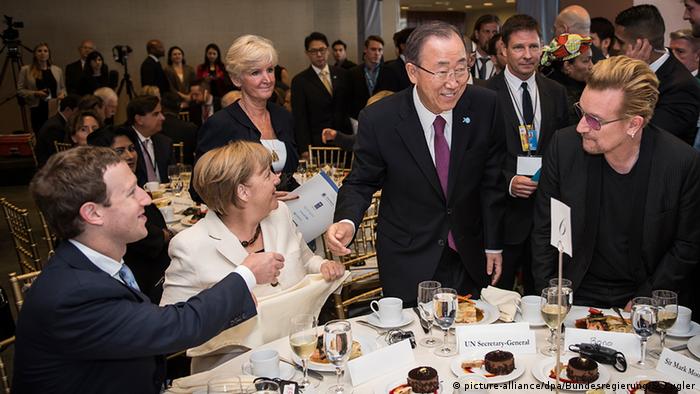 It's rare for U2 star Bono to sing a politician's praises, usually focusing instead on world leaders' shortcomings - but Achtung Baby, he found time to honor German Chancellor Angela Merkel's stance on refugees at the UN over the weekend.

"It's a kind of leadership we haven't seen on the global stage for a long, long time," Bono said of Merkel's sudden openness to Europe's wave of new arrivals from the Middle East and Africa. "I want to thank you, Angela Merkel."

Even political adversaries have been forced to take note. Former Greek Finance Minister Yanis Varoufakis surely lacks the fondest memories of Germany's chancellor after Syriza's difficult debt negotiations with Europe, and he made this point clear in a BBC television debate on the UK's response to the migrant crisis. 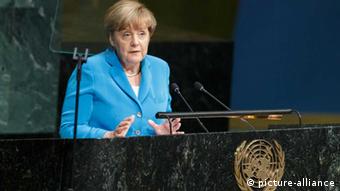 Merkel focused on the migrant issue in her UN speech

"For a start, we are running the risk of turning Mrs. Merkel into the moral maiden," Varoufakis said on "Question Time," almost visibly shuddering at the thought.

Merkel, the moral maiden; the chancellor long nicknamed "Mutti" [Mama or Mummy] in the domestic media opened her arms as thousands of refugees pressed on towards Germany. But despite the maternal, emotional nickname, might voters at home have been surprised at such a policy from the physicist? Merkel's more commonly praised for her rational thought during a decade in office, not her emotional policy.

"I absolutely think that rational people can also have a humanitarian mindset, that they can have a big heart - but they don't normally let their hearts win when it comes to making decisions," Jürgen Falter, a politics professor at the University of Mainz, told DW. "The thought that Angela Merkel might be applying for the Nobel Peace Prize had crossed my mind, too, but I really don't believe that's her ultimate goal." 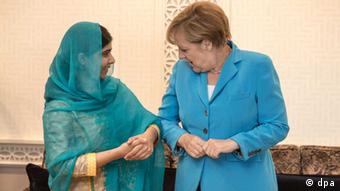 Tips from a former laureate?

Besides Barack Obama, Merkel spent some time in other Nobel laureate company while in New York, meeting Malala Yousafzai on the sidelines of the UN General Assembly.

It was President Joachim Gauck, the former pastor one might normally expect to urge Merkel to add a dash more humanity to her policies, who stressed at the weekend in Mainz: "our heart is large, but our possibilities are finite."

The main concern for the chancellor is the challenge to her base: most polls show the greatest resistance to allowing in large numbers of refugees among conservative voters. Merkel's approval ratings had sunk the lowest in the east of Germany, where right-wing political sentiment is strongest. 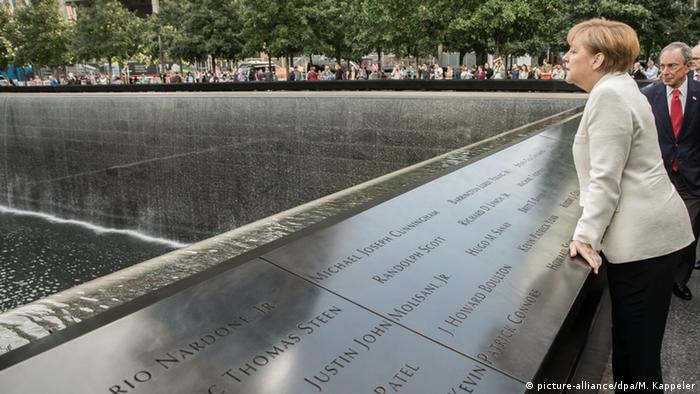 Merkel's poll performance has dipped in recent weeks, she is expected to seek a fourth term in 2017

'We can't just have feel-good lingo'

Tension within Merkel's Christian Democrats was increasingly visible in Monday's papers in Germany, as CDU parliamentarian Klaus-Peter Willsch told the "Passauer Neue Presse" daily that "the euphoria's not nearly as great" within the CDU and its base as it was "among the party leadership and in the chancellery." Willsch said that "inconvenient truths" accompanied the thousands of new arrivals, many of whom can't speak German: "We can't just have feel-good lingo," he said.

CDU interior policy expert Wolfgang Bosbach said he saw "justified" doubts in Germany's ability to take the hundreds of thousands per year planned by the government, saying a challenge could quickly morph into an overburdening of Germany. Another Christian Democrat, Thomas Strobl, raised questions about the identities of the new arrivals: "The boat isn't full, but too many of the wrong people are sitting in it," he told the "Rheinische Post" paper.

The same polls that show a slide for the chancellor also demonstrate that the Christian Democrats remain Germany's strongest single party by far, with the CDU losing just one percentage point against August's figures. Overestimating Merkel's wobble in the polls, roughly two years before national elections in Germany, would be a foolish move. Still, the chancellor's decision to show a big heart on refugees could turn into a major headache over the next two years, unless Germany can make major strides integrating its newest residents.

"I too am very skeptical that an aging population like ours, which has also become quite complacent, can meet this integration challenge without breaches, without friction," Professor Falter says. "It won't be possible in a year, it will take at least half a generation to truly integrate such large numbers of people, who are not coming in spurts this time, but rather all at once."

That integration process might be in its nascent stages two years from now when either Merkel seeks her fourth term, or a CDU successor takes the helm.

German Chancellor Merkel has reiterated her demand for Germany to have a permanent seat on the UN Security Council. Despite receiving support from Japan, India, and Brazil, her call for reform might fall on deaf ears. (26.09.2015)