Turkey's military incursion into northeast Syria is reverberating among Kurds in Germany and their supporters. Germany has the largest Kurdish diaspora in the world. 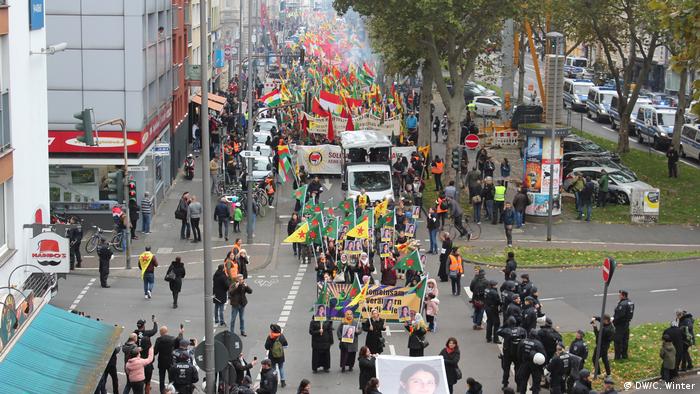 Tens of thousands of Kurds and people supporting them rallied across Germany on Saturday amid a crescendo of criticism against Turkey's military offensive in northeast Syria.

In the western German city Cologne, around 15,000 people waving a sea of Kurdish and leftist flags marched peacefully in the rain shouting slogans against Turkish President Recep Tayyip Erdogan and in support of the Syrian Kurdish YPG fighters battling NATO's second-largest army and a hodgepodge of Turkish-backed rebel proxies.

Organizers estimated 50,000 people participated in rallies in cities across Germany, including in Hamburg, Frankfurt, Berlin and Stuttgart, in the latest protests across the country since the start of the Turkish military operation on October 9.

"Long live the YPG, long live the resistance of Rojava," protesters in Cologne chanted, invoking the name of the de facto autonomous region dominated by the Syrian Kurds, where Turkey seeks to carve out a buffer zone.

The YPG is the main component of the Syrian Defense Forces (SDF), a Kurdish, Arab and Christian umbrella alliance that led the US-backed fight to defeat the "Islamic State" (IS) at the cost of nearly 10,000 fighters.

Turkey considers the YPG a terrorist organization for its ties to the outlawed Kurdistan Workers' Party (PKK), which has fought a nearly four-decade insurgency against the Turkish state. 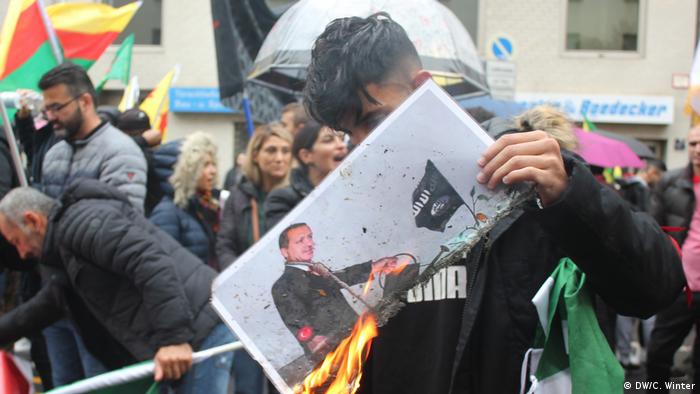 The YPG, and hence the PKK, have become the flag bearers of the Kurdish nationalist cause by saving many members of the Yazidi religious minority from genocide at the hands of IS in Iraq, defeating IS in the battle of Kobane and then pressing a US-backed offensive to crush IS in Syria.

Their success on the battlefield and ideological blend of grassroots governance, secularism and socialism that highlights women's rights has gained them sympathy and backing not only among Kurds, but also other groups in Germany.

"The Kurds became relevant to most of the world with their war against IS. This was followed by many people closely and the Kurds were seen … as a nation with different good qualities — gender equality, socialist perspectives and stance against religious conservatives," said Inci Oyku Yener-Roderburg, a researcher of diasporas from Turkey at the University of Duisburg-Essen. 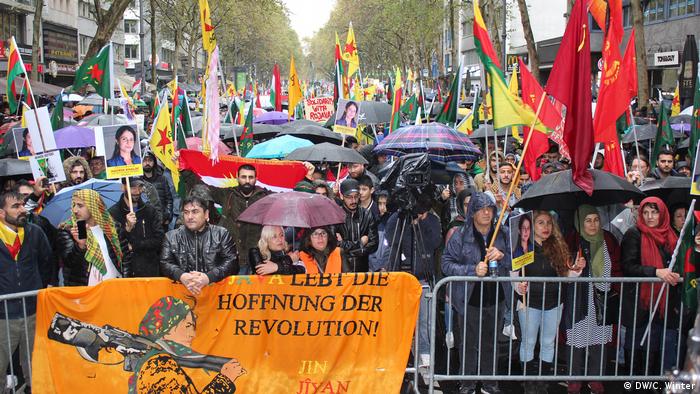 Germany has the largest Kurdish diaspora in the world, with most coming in various waves from Turkey and Syria

Kurdish protesters were joined by women and feminist groups, environmentalists and leftists of various stripes — including many Germans.  In a rarity for a Kurdish protest, all parties in the German parliament except the anti-immigrant Alternative for Deutschland (AfD) had representatives in attendance in Cologne.

The Turkish military operation has exacerbated the negative outlook among Germans towards the country and Erdogan developing over the past years. According to a survey conducted by Forschungsgruppe Wahlen pollster, 91% of Germans are against arms exports to Turkey and 65% support punitive economic measures against the country due to its offensive in Syria.

The broad consensus forming around the Syrian Kurds "is largely a sign of how deeply key Kurdish social milieus have not just integrated into the heart of German society, but are now entering the German political establishment," said Alexander Clarkson, a lecturer for German and European Studies at King's College London who specializes in diaspora communities in Germany.

Women play a prominent role in both the YPG and its parallel political structures, which advocate a feminist ideology that enlists women co-chairs in its governance bodies and female fighters.

For Germans like Mascha, a member of the Women's Strike movement, the radical feminist experiment in Rojava is an inspirational "model" for women everywhere.

"It is real liberation," she said. "We can learn a lot from Rojava and show solidarity with women there." 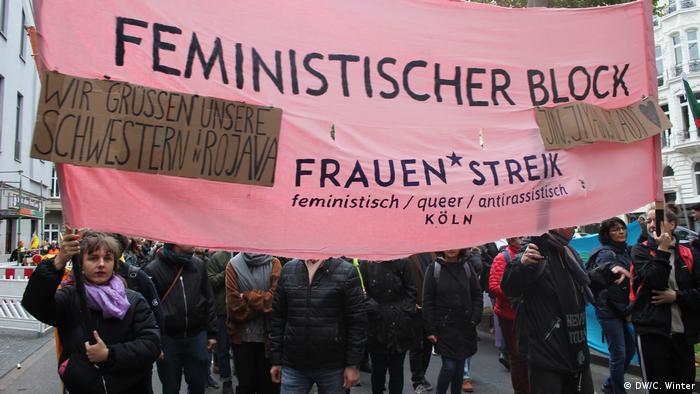 Amid chants from both men and women of "Woman, Life, Freedom," many protesters held up signs of fallen fighters from the YPG and its all-female units, the YPJ.

Vian, a 15-year-old Kurdish girl from Qamishli in northeast Syria who arrived in Germany five years ago, marched holding a sign bearing the picture of a female soldier killed in the fighting.

"They are women just like us and martyrs for Rojava," she said. "She gave everything and I also want to fight," she said, adding that her mother marching next to her would not allow her to pick up a gun. 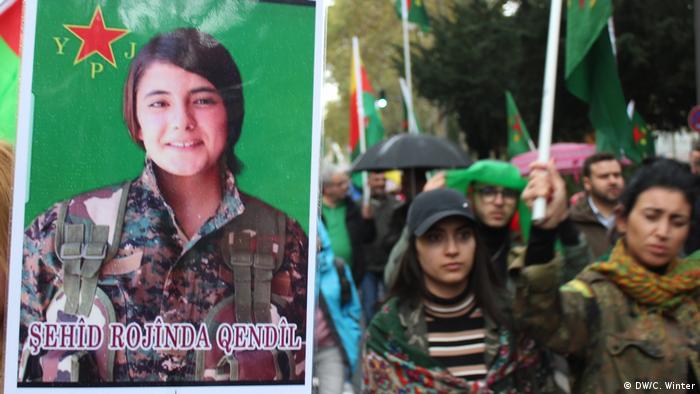 A Kurdish woman holds a placard of "Martyr Rojinda Qendil," one of many YPJ female fighters who have died fighting in Syria

Saturday's march came as a new symbol of Kurdish martyrdom at the hands of Turkey has emerged for women.

Hevrin Khalaf, a prominent Syrian Kurdish female politician and secretary-general of the Future Syria political party, was summarily killed by a Turkish-backed rebel faction on October 12 in northeast Syria.

"She was dragged out of her car, beaten and shot dead in cold blood by fighters from [the Turkish-backed group] Ahrar al-Sharqiya," according to Amnesty International.

Many women at the protest in Cologne held up placards of Khalaf above a caption reading, "Murdered by Erdogan's soldiers."

"Her death is a great loss for Kurdish women as a politician and rights activist," said Cigdem, a Kurdish protester wearing guerilla garb. "She is a martyr like Arin Mirkan," she said, referring to a prominent YPJ commander who became a symbol of resistance when she carried out a suicide attack on IS that killed a number of jihadis during the battle for Kobane in 2014. 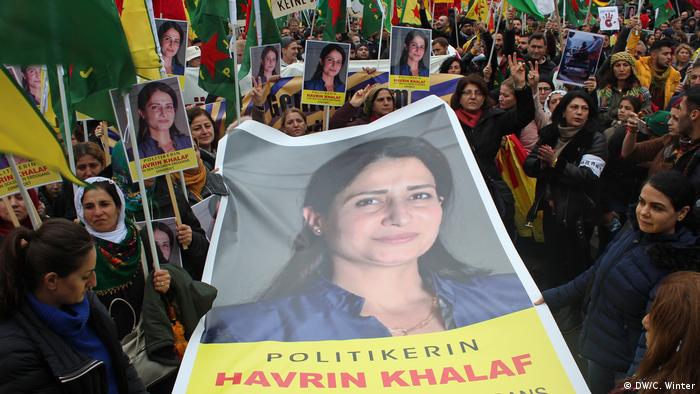