Germany has cut arms shipments to Turkey over Ankara's offensive in northern Syria. But despite the halted deliveries, Berlin's weapons sales to Ankara have reached their highest level in 14 years. 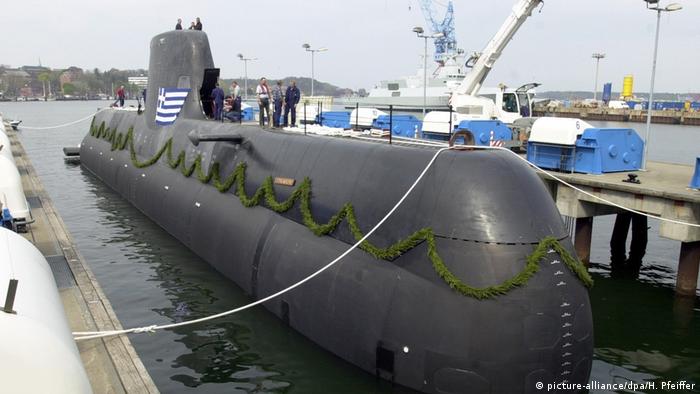 A Type 214 submarine docked at a port

Germany sent €250.4 million ($277 million) worth of weapons to Turkey in the first eight months of 2019, according to information cited by German press agency dpa.

That's already higher than any annual amount since 2005 — even without including the last four months of the year.

The data seen by dpa was released by the German Economy Ministry at the request of the opposition Left party.

No. 1 importer of German arms

Weapons exports to Ankara have been thrown under the spotlight since Turkish forces invaded northern Syria last week.

The European Union on Monday passed a resolution to limit arms sales to Turkey, but stopped short of imposing a weapons embargo. Chancellor Angela Merkel has urged the NATO ally to end its operation in Syria, and said Germany will not deliver any more weapons to Turkey "under the current conditions."

Last year, Turkey was the No. 1 importer of German weapons by far, with contracts amounting to €242.8 million. Despite a halt in some deliveries, it is on track to claim that title again in 2019.

According to the Economy Ministry, the weapons sales were "exclusively merchandise for the maritime sector," with most of the orders likely relating to material for six Type 214 submarines being built in cooperation with the German firm Thyssenkrupp Marine Systems.

The German government approved the sale of parts for the submarines in 2009.

For the first time in three years, there has also been an increase in the number of new export permits issued by Berlin for Turkey. By October 9, the government had approved shipments valued at €28.5 million, already more than double the €12.9 million cleared over the course of 2018.

Brawls between Kurds and Turks injure several across Germany

Clashes again broke out in Germany between Kurds and Turks over Turkey's military operation in Syria. Kurds have been organizing daily demonstrations across Germany. (17.10.2019)

S-400 missile system: What is it and why does Turkey want it?

Turkey is set to become the first and so far the only NATO member to use Russia's advanced S-400 missile system. What is so special about this weaponry — and why is Turkey risking its US ties over it? DW has the details. (12.07.2019)