Germany has the largest Kurdish diaspora in the world. Kurds and supporters there rallied against Turkey's incursion into Syria that threatens to unleash a humanitarian disaster and squash Kurdish autonomy. 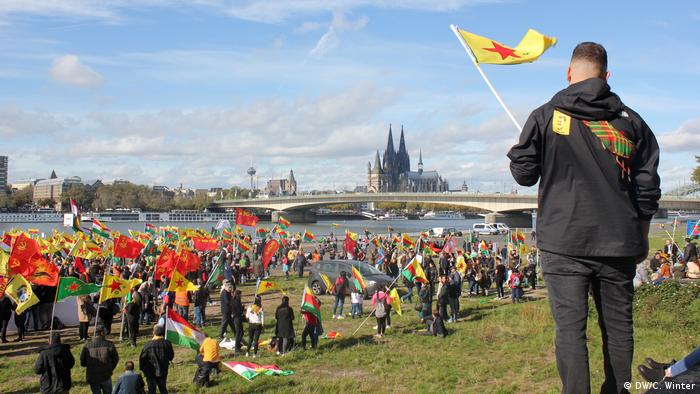 Tens of thousands Kurdish demonstrators marched through Cologne and other German cities on Saturday against a Turkish cross-border military operation in northeastern Syria.

In Cologne, 10,000 people waving a sea of flags bearing the symbols of the Kurdish YPG militia and Rojava, or Syrian Kurdistan, demanded the end of the Turkish offensive, imposition of an international no-fly zone and a halt of weapons sales to Turkey. Joined by left-wing German groups, Kurds also protested in other cities, including Hamburg, Berlin and Munich.

"Together as one, the Kurdish people are united," demonstrators in Cologne chanted, between shouting slogans labeling Turkish President Recep Tayyip Erdogan a "terrorist" and "child murderer."

"Long live the YPG, long live the resistance of Rojava," protesters chanted, invoking the name of the northeastern administrative area held by the Kurds, where Turkey's incursions are taking place. 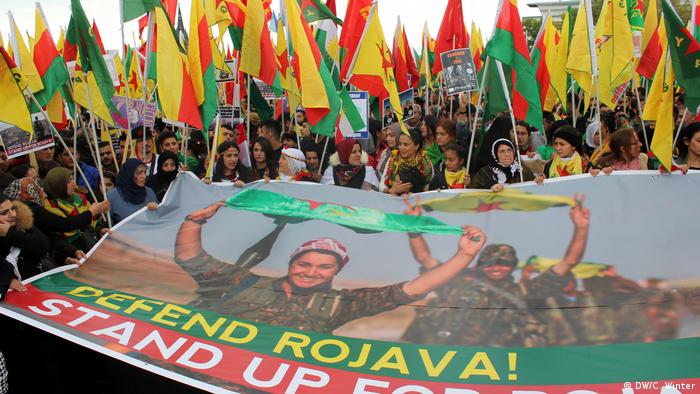 Kurdish women hold a banner calling for the defense of Rojava. Women play a prominent role in both the YPG and the PKK, which advocate a feminist ideology that enlists women co-chairs in its governance structure and female fighters

The YPG is the main component of the US-backed Syrian Defense Forces (SDF), a Kurdish, Arab and Christian umbrella alliance that has led the fight against the "Islamic State" at the cost of nearly 10,000 fighters.

The US withdrew its troops from the Syrian border region last week, paving the way for the Turkish operation.

The street action came as the Turkish incursion against what Ankara describes as "terrorists" in northeastern Syria entered its fourth day despite condemnation from the United States and the European Union.

On Saturday, the Turkish Defense Ministry said the key Syrian border town of Ras al-Ayn had been captured by Turkish forces. The Syrian Observatory for Human Rights, a group monitoring the Syrian conflict from Britain via a network of activists on the ground in Syria, confirmed that Turkish troops had entered the town but said fighting with Kurdish forces was ongoing.

Turkey considers the YPG to be the Syrian branch of the Kurdistan Workers' Party (PKK), which has waged a nearly four-decade insurgency against the Turkish state.

The Turkish operation has displaced at least 200,000 people and left scores of civilians and SDF fighters dead. There has also been retaliatory fire across the border at towns inside Turkey.

Turkey says it plans to create a "safe zone" along its border and transfer more than 1 million Sunni Arab Syrian refugees hailing from other parts of Syria to the area.

The Turkish ground assault is joined by a hodgepodge of Turkish-backed rebels of various Islamist stripes, whom the Kurds describe as "mercenaries" and "gangs."

Many of the same rebel factions were involved in a Turkish offensive last year against the YPG in Afrin, where half the predominantely Kurdish population was displaced and human rights groups documented abuses against the population.

"The same scenario that happened in Afrin will play out in Rojava," said Chiklou, a Syrian Kurd from Afrin who fled to Germany five years ago.

Sipan, another demonstrator who came with his wife and two small children dressed in YPG guerilla attire, said his family in his hometown of Qamishli, the largest city in northeastern Syria, was frightened by the Turkish operation and the prospect of their homes being confiscated.

The Turkish-backed rebels "are IS and al-Qaida, they only changed clothes," he said.

Can, another protester who fled from Qamishli to Germany five years ago, said the Kurds feel "betrayed" by the United States after President Donald Trump paved the way for the Turkish assault.

"I've lost one brother who fought with the YPG and the other is fighting now," he said.  "Everybody is against us and we'll do whatever is necessary to defend our land."

The YPG, and by extension the PKK, have become the flag-bearers of the Kurdish nationalist cause by saving many members of the Yazidi ethnic group from genocide at the hands of IS in Iraq, defeating IS in the heroic battle of Kobane and then pressing a US-backed offensive to crush the jihadi group in Syria.

Meanwhile, they have set up a de facto autonomous region in northeastern Syria that has inspired Kurds but caused alarm bells to ring in Ankara.

Germany has the largest Kurdish diaspora in the world, with most coming in various waves from Turkey and Syria.

The European Council president has told Turkey not to use refugees to "blackmail" the EU with regards to Syria. Meanwhile, NATO's Jens Stoltenberg was more cautious when meeting the Turkish foreign minister. (11.10.2019)