Nairobi's reliance on motorcycles is hindering efforts to reduce carbon emissions, as manufacturers struggle to adapt to clean energy technology. But a new solar-powered three-wheeler could help clean up the city's act. 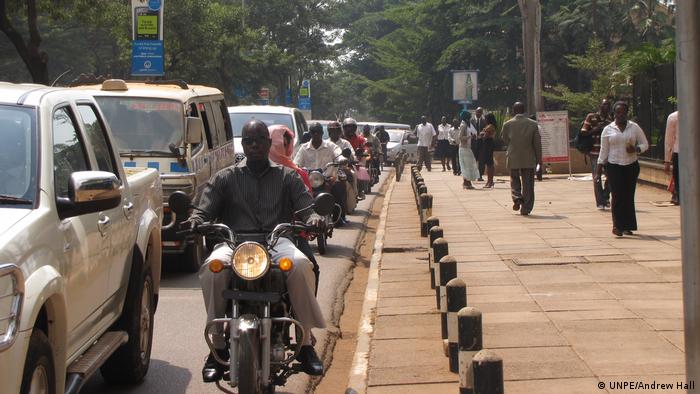 Kenya has a motorcycle problem.

What's worrying is the fact that these motorcycles — which are increasing in demand thanks to a growing young population in search of employment — produce more carbon emissions than cars.

A baseline survey on electric mobility in Kenya conducted by the University of Nairobi reveals a steep rise in cumulative emissions from two and three-wheeled vehicles between 2005 and 2017.

Clean energy technology for motorcycles is simply not developing at the same rate as cars.

"Cars are getting more efficient because of vehicle emission technologies, while motorcycles are not," David Rubia, an air quality and mobility program officer at the United Nations Environment Program (UN Environment), told DW. "One motorcycle can have up to 300 times more hydrocarbon emissions, and 10 to 50 times more for particulate matter [compared to] an average petrol car."

Read more: VW in Rwanda: Car-sharing and a future in e-mobility

Through the Nationally Determined Contributions (NDCs) — which formed a key component of the historic 2015 Paris climate agreement — Kenya has committed to reducing its carbon emissions by at least 30 percent by 2030. In order to meet this commitment, Rubia said 20 percent of Kenya's motorcycles must be electric-powered by this deadline.

"This will ensure an economic win for the high number of unemployed youth and prepare Africa for a transition to an electric mobility transport system in general," Rubia said.

Rubia pointed out that, unlike electric cars, electric motorcycles do not require an investment in new transport infrastructure such as the installation of special charging stations.

The government is actively working toward meeting its NDC commitment by focusing on developing cleaner motorcycles. Kenya, alongside Uganda, Ethiopia and Rwanda, is collaborating with the Nairobi-based UN Environment to collect baseline data and develop trials for electric motorcycles and three-wheelers. This will allow these countries to develop the right policy interventions and, it's hoped, introduce more electric motorcycles on the streets. 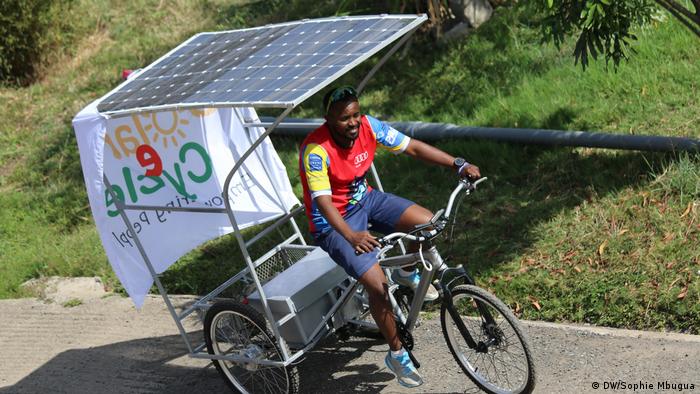 Nairobi is infamous for its terrible traffic jams, which only adds to the emissions problem. But a new solar-powered three-wheeler being developed by the Strathmore Energy Research Center hopes to solve these issues by giving back more control to the driver.

"The battery capacity when fully charged means that one can drive 50 kilometers [about 30 miles] — if the sun is low, one can peddle home," said Ignatius Maranga, a renewable energy engineer and researcher. "The [three-wheeler] allows one to conduct business during the day and then use the remaining energy to power the home."

The developers hope to begin mass production by early 2019, using their €100,000 ($114,000) prize from the 2018 Valeo Innovation Challenge in Paris in October. They estimate the solar-powered e-cycle will sell for approximately $1,000. Customers can also choose a pay-as-you-go scheme, contributing $2 a day for around three years.

However, even low-emission solar-powered vehicles don't come without environmental risks. The batteries used to keep the three-wheelers running also contain lead, lithium and nickel, which are harmful to the environment when not disposed of properly.

The problem with lithium mining

Anne Wacera, the quality manager at the Strathmore research center, is working on mapping Kenya's burgeoning hazardous electronic-waste industry and identifying companies that will help to safely dispose of the batteries and solar panels, keeping the new vehicles as eco-friendly as possible.

Although panels are expected to last for at least 25 years and the batteries up to nine years, Wacera said it's important to start thinking about long-term solutions to ensure Kenya will not become overwhelmed by an e-waste problem in the future.

"We are considering buy-back solutions for the batteries, where the car owners will not fully own the batteries themselves, but will be able to return them and get a new one after its shelf life [is over]," she said.

For Rubia, the most important thing at this point is to raise awareness of this new electric transport technology so people will understand the benefits and integrate it into their daily lives.

"A lot of people do not know that this is something that exists today," he said. "We are concerned about making sure we pilot the right technology for the right purpose in each country."

World in Progress: Stepping up training to fight unemployment in Kenya