Only 20 percent of electronic waste was recycled in 2016, despite 67 nations having e-waste legislation. Electronic waste is expected to reach 52.2 million tons in 2021. 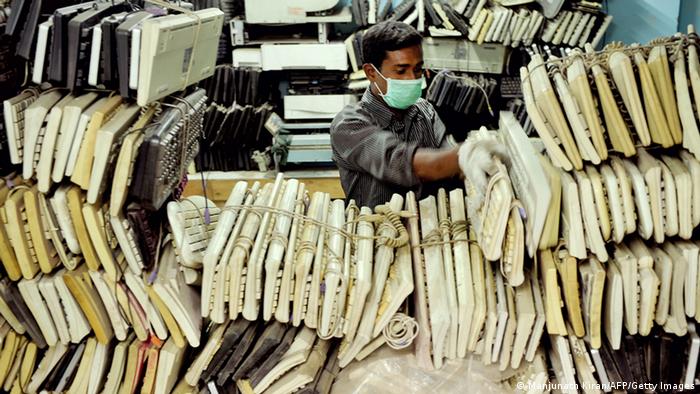 The weight of "e-waste” in 2016 was equivalent to about 4,500 Eiffel Towers, according to the joint study by the UN University, the International Telecommunication Union and the International Solid Waste Association.

The study said rising incomes and falling prices for electronic items from solar panels to fridges were to blame for the 8 percent increase in e-waste, which sat at 41 million tons in 2014. E-waste was defined as any item of trash with a plug or a battery.

Raw scrapped materials, including gold, silver, copper, platinum and palladium, were worth an estimated €55 billion ($65 billion) in 2016.

Despite 66 percent of the world's population being covered by e-waste legislation, most e-waste, which can pose serious risks to human health and the environment, ends up as rubbish in landfills rather than being recycled or properly discarded.

Rüdiger Kühr, head of the UN University's Sustainable Cycles Programme, told Reuters this was a surprise considering 67 nations, covering two-thirds of the world's population, had legislation about processing e-waste.

"What is still shocking ... is that only 20 percent [of e-waste] is going in the official collection and recycling schemes," Kühr said.

The report said many people threw out gadgets to buy an upgraded model or because repairs of anything from a toaster to a smartphone were more expensive than buying a replacement.

China was the biggest source of the scrap with 7.2 million tons in 2016, ahead of the United States.

Australia, New Zealand generated the highest amounts of e-waste per inhabitant at 17.3 kilos each, but only 6 percent were formally collected and recycled.

Europe had the highest collection rates at 35 percent.

The report comes as the holiday season fast approaches. Kühr urged Christmas shoppers to think about e-waste when choosing gifts.

"In Christmas shopping, more and more equipment comes with a plug or battery ... facilitating the increase of the e-waste mountain," Kühr said.

The illegal disposal of electronic appliances poses a threat to both human health and the environment. Yet still the pile continues to grow, a new UNEP report says. Solutions are slow in the making, including in Germany. (13.05.2015)

How Nigeria is dealing with its e-trash

An innovative solution to electronic waste