Julian Assange: US still pushing for extradition | World | Breaking news and perspectives from around the globe | DW | 11.08.2021 Assange has not been a free man for 11 years: that is 4,000 days and nights. He celebrated his last three birthdays in London's high-security Belmarsh Prison, which is often referred to as the "British Guantanamo" for its tough conditions.

All applications for bail or a release into house arrest have been denied. So, the Australian journalist and activist remains incarcerated as he awaits the decision on whether or not the UK will allow his extradition.

In the US, he faces a total sentence of up to 175 years in prison in connection with multiple espionage charges such as the release of sensitive military documents on US operations in Afghanistan and Iraq — including alleged war crimes, for which nobody has yet stood trial.

In January, a London court decided not to permit extradition in a ruling that initially met with relief among human rights activists, journalists' associations, and Assange supporters. That relief, however, quickly turned into dismay when the written statement on the ruling was studied more closely.

The judge said Assange suffered from clinical depression that could be exacerbated by "severely restrictive detention conditions in US prison facilities designed to remove physical contact."

As German Green Party MP Margit Stumpp explained to DW: "The judge rejected his extradition solely on humanitarian grounds, citing the poor conditions in US prisons." However, she added: "She (the judge) did not reject or even question any of the reasons cited by the US to justify their case. The implication is that Assange can still face extradition if the American authorities deliver credible assurances that the prison conditions he would likely face would not be detrimental to his health or a threat to his life."

This issue will be at the center of the retrial. The High Court judges accepted three out of five reasons for the appeal. Wednesday's initial hearing will deal with the remaining two to determine whether or not they will also be accepted.

The irony is that the High Court judges granted the US appeal just days after it had come to light that the key witness, Icelandic national Sigurd Ingi Thordarson, had admitted to fabricating incriminating testimony against Assange in return for immunity from prosecution and a financial reward.

Christian Mihr of the German branch of the NGO Reporters without Borders is convinced that the credibility of the British justice system has been badly undermined by the Assange case. In the first place, Mihr points out, it was very hard to get access to the extradition trial: "That represents a violation of a fundamental principle of the rule of law: that the justice system must be accessible to the public."

Will things improve with the appeal trial? Rebecca Vincent, UK Bureau Director for Reporters without Borders wrote on Twitter: "I've said it before and I'll say it again: I've never had so much difficulty accessing proceedings in any case, in any country, as in the Assange case. There is a mix of reasons/excuses why, but it's not in keeping with the principles of open justice & the right to a fair trial."

For his part, Christian Mihr is in no doubt: this is a political rather than a criminal trial and the US, he says, needs to back off. Joe Biden is the third American President involved in attempts to prosecute Julian Assange. It was the Obama administration that launched the investigation. He was charged under the watch of Donald Trump. And, so far, Joe Biden has shown no sign of heeding calls to end proceedings.

It is not known whether German Chancellor Angela Merkel pressed for the release of Julian Assange during her visit to Washington in July. After all, 120 prominent Assange supporters, including politicians, artists , and journalists, had written an open letter requesting her to do so. 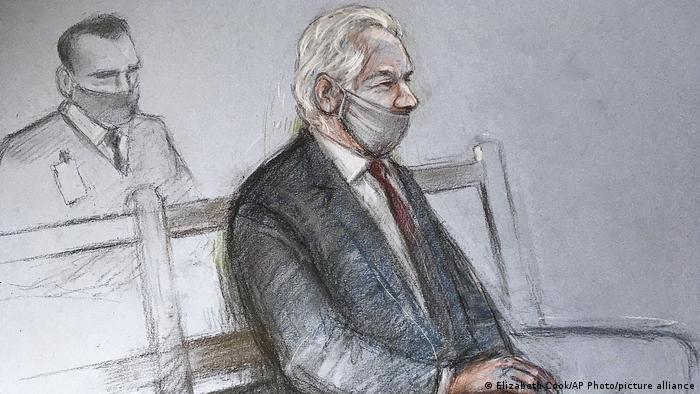 In January a UK judge rejected the United States’ request to extradite WikiLeaks founder Julian Assange to face espionage charges, saying it would be “oppressive” because of his mental health

Margit Stumpp was among the signatories. The Green Party parliamentarian says Assange's extradition and conviction would be, "a devastating signal to journalists."

"Anybody involved in investigative journalism would in future constantly need to be aware of the threat posed by supposedly democratic and legitimate state authorities," she told DW.  "Press freedom would be severely limited — including in Europe. A key control function, and with it a fundamental cornerstone of democracy, would be lost and instead criminalized." It would, says Margit Stumpp, be tantamount to an assault on the very foundations of our democracy.

Together with other German MPs, Stumpp is a member of a cross-party initiative called Freedom for Julian Assange. Another member of the group is Social Democrat Frank Schwabe. He says he believes that there is simply no legal justification for the way that Assange has been treated. Speaking to DW, Schwabe noted, "When it comes to whistleblowing, you get the impression that somehow it's the very worst form of criminal behavior and that it's all about discouraging others from going down the same path. I believe that we need more whistleblowing and that whistleblowers must be protected."

Autocrats and dictators of the world will likely be keeping a close eye on how Julian Assange and other whistleblowers are dealt with in the US and UK. The repressive treatment of the WikiLeaks founder can, in turn, easily be used by repressive governments to accuse the West of double standards on press freedom. And that is precisely what Chinese Foreign Ministry Spokesperson Hua Chunying did at the beginning of May.

Which is why Margit Stumpp says: "If the US and other Western nations really want to be seen to be protecting and defending press freedom and the rule of law, then they must stop using Julian Assange to demonstrate how to deal with critical  journalists."

The Green politician believes that, given the poor conditions in the prison where he is being held, the failure to release Julian Assange on bail amounts to nothing less than a travesty of justice and a humanitarian scandal.

UN Special Rapporteur Nils Melzer told DW that he believes that Julian Assange's imprisonment and the conditions of his imprisonment are neither justified nor proportional. The Swiss law professor says it is instead a case of cynical maneuvering. Because, he argues, Assange is demonstratively being detained in a high-security prison, it can be argued that: "He hasn't attempted suicide. And if he were to end up in an American high-security facility under the selfsame conditions, then there would no longer be any justification for not extraditing him."

The only thing that appears to be certain is that the bitter wrangling over the future of the world's most famous whistleblower will continue. And it could be years, many more years, before Julian Assange will know what his ultimate fate might be.

Every month, the One Free Press Coalition draws attention to unresolved cases of crimes against journalists. August's iteration highlights cases of photographers, filmmakers and video journalists targeted for their work.