Julian Assange verdict: A test case for press freedom | World | Breaking news and perspectives from around the globe | DW | 04.01.2021 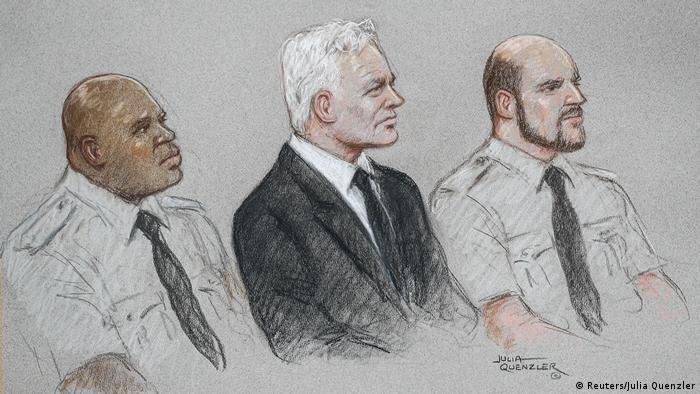 For the past 10 years, Australian Julian Assange has been pursued by US authorities as an enemy of the state. He exposed their dark secrets. On January 4, London judge Vanessa Baraitser will announce her decision on whether the investigative journalist will be extradited to the US.

Assange is being held at the London maximum security prison Belmarsh — the UN special rapporteur on torture, Nilz Melzer, described it to DW as solitary confinement. Assange spent seven years claiming asylum at the Ecuadorian embassy in London, now he faces the threat of spending the rest of his life behind American prison walls — under conditions Melzer describes as torture. 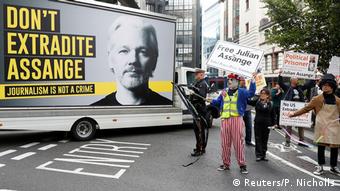 For German Green party member of parliament Margit Stumpp, the court case is an "acid test for the western community of values." Together with lawmakers from the Social Democrats, the conservative Christian Democrats, the socialist Left party, and the Free Democrats, Stumpp established the cross-party working group "Freedom for Julian Assange."Stumpp told DW that she sees "the rule of law being violated" in the extradition procedures. That started with the fact that she was unable to receive access to the court process as an observer. "I've often been to Turkey, and there I had no problems getting into the courtroom," Stumpp said, an unflattering comparison for the UK.

In early November, BBC correspondent Orla Guerin confronted Azerbaijani President Ilham Aliyev with critical questions about press freedom in his country. Aliyev answered that in view of its treatment of Assange, the UK had no right to lecture other countries on matters of human rights and press freedom. 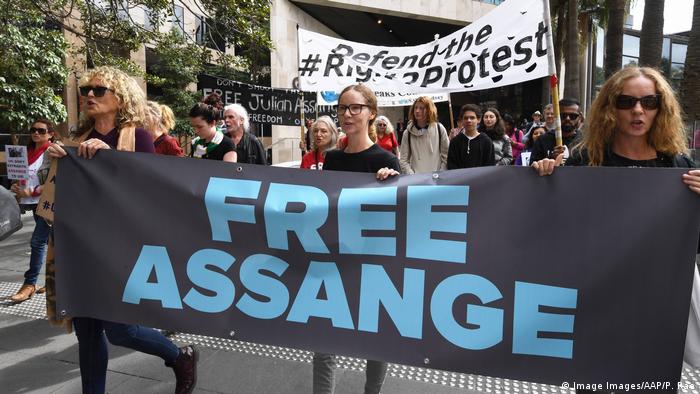 Assange supporters have taken to the streets across the world

Nils Melzer is not only the UN special rapporteur on torture. He also teaches international law at the University of Glasgow and knows his way around British law. His verdict on how Julian Assange has been dealt with is damning. "The legal proceeding in itself is not respecting the basic standards of human rights, of due process and the rule of law." The motivation is obvious in the face of revelations of American "corruption and war crimes and other criminal conduct," said Melzer: "The United States is trying to criminalize investigative journalism ... And the British system, unfortunately, is in collusion with the United States." On December 21, Melzer appealed to US President Donald Trump to pardon Assange in his final days at the White House.

Reporters without Borders (RSF) has followed the proceedings closely — under "shocking circumstances," Christian Mihr told DW. The director of the Germany branch of the organization attended many days of the court proceedings in London and alleged that British authorities "attempted to systematically shut out international observers." Even video access, which was initially guaranteed, was withdrawn at short notice. The few observers who were granted access were not allowed in the courtroom itself; they had to monitor a glitchy video transmission from a separate room under extremely uncomfortable conditions, in cold temperatures. In the end, Reporters Without Borders was the only NGO present in court every day of the trial.

Regarding the testimony of the witnesses — most of whom were called up by the defense — RSF head Mihr said it was made clear not only that "this is a question of freedom of the press." It has also become clear that it is "a question of life or death for Julian Assange." Psychologists, psychotherapists, and even a psychiatrist for the prosecution spoke of a very problematic state of health for Assange. "There is an acute risk of suicide under the conditions of solitary confinement," said Mihr.

As for the verdict to be announced on January 4, Mihr holds little hope. "I've always said that this is a political process. That means there is political pressure. And that means — as sad, as tragic as that is — I won't be surprised if the court approves extradition."

Whatever the verdict, both parties have the option to appeal. After two possible higher courts in the UK, the extradition proceedings could end up before the European Court of Human Rights. The question of whether Julian Assange will be extradited to the US could therefore drag on for years.