Sebastian Kempkens has reported that he was attacked during Turkish Foreign Minister Mevlüt Cavusoglu's rally in Hamburg. He said the ruckus began after he held up a sign supporting detained journalist Deniz Yucel. 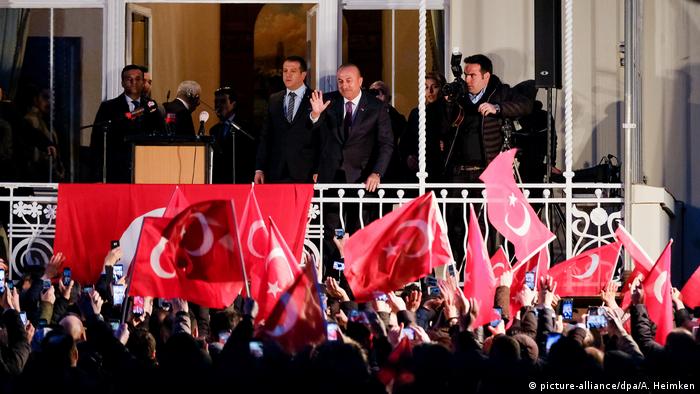 After reporting on Turkish Foreign Minister Mevlut Cavusoglu's rally in Hamburg this week, journalist Sebastian Kempkens on Wednesday revealed in German daily "Die Zeit" that he had been struck with flags and hit in the face by rally-goers.

Kempkens admits that the confrontation began after he "departed from his role as a journalist and became an activist for press freedom." As Cavusoglu accused Germany of jeopardizing Turkey's strength, Kempkens raised a banner demanding the release of German-Turkish journalist Deniz Yucel, who was detained in Turkey in February. Turkish President Recep Tayyip Erdogan had called Yucel a "German agent" and a "terrorist."

Kempkens reported that within a matter of seconds of raising the sign, a woman read what he had written and called him out as a "provocateur." He says he was suddenly barraged with flags, shoved into a hostile crowd and hit in the face, knocking off his glasses.

Shortly afterwards, having been pushed towards the exit, Kempkens said that five men pushed him against a wall of the Turkish consulate, where Cavusoglu' was speaking. "Piss off out of here and something bad is going to happen to you," one allegedly said. "You can thank Erdogan's humanity that you're still alive," said another.

The Senate of Hamburg, the city-state's executive branch, has reportedly asked the Turkish consulate "to help in clarifying the incident and to take a stance." In a statement, the Senate stressed that freedom of expression and a free press were fundamental rights, and that intimidation or physical attacks were considered unacceptable.

Cavusoglu's speech from the balcony of the Hamburg consulate was one of a several of referendum rallies Turkish ministers are seeking to hold in Germany, were some 1.4 million eligible Turkish voters reside.

Increasing tensions between Germany and Turkey

An upcoming referendum in Turkey seeks to grant Erdogan with further powers, a move supported by rallying ministers and rally-goers.

The proposed rallies, however, have sparked adiplomatic dispute between Germany and Turkey.

Ankara accuses Berlin of "meddling" in its push to broaden the president's powers after several German cities cancelled referendum events, citing safety regulations. The decision prompted Erdogan to accuse Germany of resorting to Nazi-era tactics. "Your practices are not different from the Nazi practices of the past," the state-run Anadolu Agency reported Erdogan as saying.

Among those affected was Cavusoglu, who was forced to move his rally on Tuesday at the eleventh hour from Hamburg's Plaza Event Center to the Turkish consulate.

A rally Cavusoglu was due to address in the Dutch port of Rotterdam was also cancelled on Wednesday, the city's mayor said.

"The venue's owner has informed me that he will no longer make it available," Ahmed Aboutaleb said, adding that even if organizers tried to carry on with the meeting it would probably be banned for security reasons.

"I'm of the opinion that the minister's visit forms a direct risk to public order and safety in Rotterdam and could lead to increased polarisation and escalations," Aboutaleb added.

On February 14, Deniz Yucel a German-Turkish journalist for the German newspaper "Die Welt" was detained by Turkish authorities.

The 43-year-old, who has penned several articles critical of the Turkish government's treatment of ethnic Kurds, has been in jail pending his trial on terrorism-related charges.

His arrest has prompted demonstrations and uproar among politicians, fellow journalists and the public, with Chancellor Angela Merkel describing his detainment as "bitter and disappointing."