Some members of the foreign press in Turkey have told DW that they see the detention of reporter Deniz Yucel as an attempt to silence foreign media. Working conditions have worsened since the coup attempt, they say. 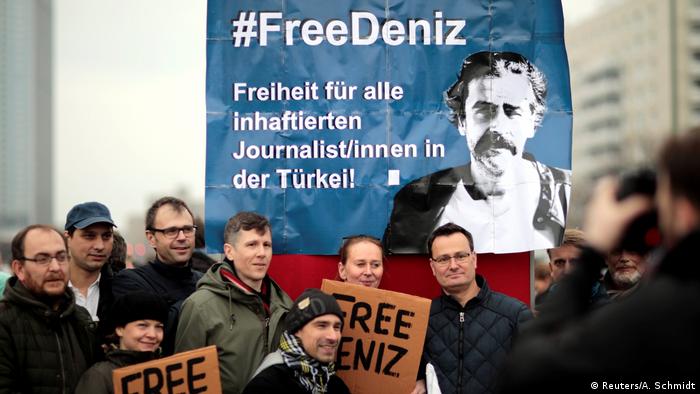 Deniz Yucel is the first German reporter to be held in a widespread crackdown on press freedom in Turkey. He may not be the last.

The reporter, who works for the daily "Die Welt," stands charged with membership in a terrorist organization, spreading propaganda, and misuse of information after reporting on hacked emails of Turkish Minister of Energy Berat Albayrak, President Recep Tayyip Erdogan’s son-in-law.

"Die Welt" reported that Yucel, who has been detained since February 14, was being questioned in Istanbul on Monday. Following the questioning, a Turkish prosecutor recommended Yucel's arrest. He will now be put on trial, though the exact timeframe for a trial remains unclear.

"Deniz Yucel's detention is an attempt to scare and silence foreign correspondents," Alberto Tetta, an Istanbul-based freelance journalist and producer, told DW. "I think the most important role for a journalist is to question who is in power. The Turkish government should give answers to important accusations about their ministers instead of trying to silence, through internet and media control, [those] who speak about those allegations," he said.

Since a failed coup attempt last year, Turkish authorities have detained hundreds of people, including journalists, academics and suspected sympathizers of US-based cleric Fethullah Gulen, whom they blame for orchestrating the failed putsch.

"I really don’t understand this. I have the feeling they perceive Deniz as a Turkish journalist as he has a Turkish and a German passport. And treat him accordingly. The whole approach of the government to journalism is shocking. And the message is clear: no one who criticizes Erdogan is safe," Maximilian Popp, a reporter for "Spiegel" in Turkey, told DW.

Foreign reporters have so far enjoyed more liberties in Turkey than local journalists. However, conditions have worsened for non-Turkish journalists as well under the state of emergency rule introduced after the failed coup.

Spiegel’s Popp was among many foreign journalists who told DW that sources have become more careful when they talk to foreign press or they don’t at all speak to foreign media anymore. However, many foreign journalists declined to comment as some said they do not want to compromise their visa or press card applications. Some others said the situation is "very sensitive" for commenting on the topic.

An Istanbul-based freelance foreign journalist, who does not want to be identified, told DW: "The major shift since 15th of July 2016 is the availability of sources, the personal verbal attacks when reporting, and perceived threats of arrest. After the coup, Turks became much more cautious about talking politics to the foreign press and talking in public. We can meet in cafés or offices, but doing interviews in the street is more difficult. People don't want to be seen answering questions."

That same journalist said that after the detentions, deportations or bans of some of the members of the foreign media, she has become more cautious about the topics she covers and how she covers them.

"Everybody recognizes that there is now self-censorship in Turkey. For example, I don't tweet my own articles and I don't use the hashtag #Erdogan," she said.

She is not alone. Many other foreign journalists have voiced concern on reporting about sensitive topics such as Kurdish separatism, saying it has became even harder than before the failed coup.

"Working in predominantly Kurdish southeast regions or at the border with Syria is even more difficult and there are many cases of foreign journalists temporarily arrested while working in cities like Gaziantep or Diyarbakir and even kicked out of Turkey without specific explanations about the reasons they were stopped," said Tetta, who has been living in Turkey for 10 years.

Although blockages of websites or articles are a common practice for Turkish journalists, recently foreign media have also become subject to censorship by Turkish authorities.

Access to the website and mobile application of NOS News - Netherlands Public Television and Radio - has been blocked since December 19, after the news outlet broadcast the footage of the killing of the Russian ambassador to Turkey, which was distributed by the European Broadcasting Union (EBU).

Many foreign journalists said that reporting after the coup attempt has become more difficult as it is harder to find people to interview on the record and because while reporting police could ask for documents. Failing to show documents could result in detention.

There are currently some 122 media workers jailed in Turkey, according to the European Federation of Journalists. Yet Ankara has insisted that no one has been imprisoned for writing news articles. Those who are being held work for Turkish press, but action has also recently been taken against foreign news media. Prior to Yucel’s detention, Dion Nissenbaum, a "Wall Street Journal" correspondent, was detained and held for two and a half days in December without access to lawyers or family.

Nissenbaum allegedly violated a government ban on publication of images from an Islamic State video. He returned to the U.S. following his release.

Turkey ranked 151 out of 180 in the 2016 World Press Freedom Index, published by press freedom advocacy group Reporters Without Borders.