Journalism in Belarus: ′Like walking through a minefield′ | News and current affairs from Germany and around the world | DW | 26.11.2020

Independent journalists are being beaten, detained and prosecuted in Belarus. How is the media managing to report on protests under such circumstances? 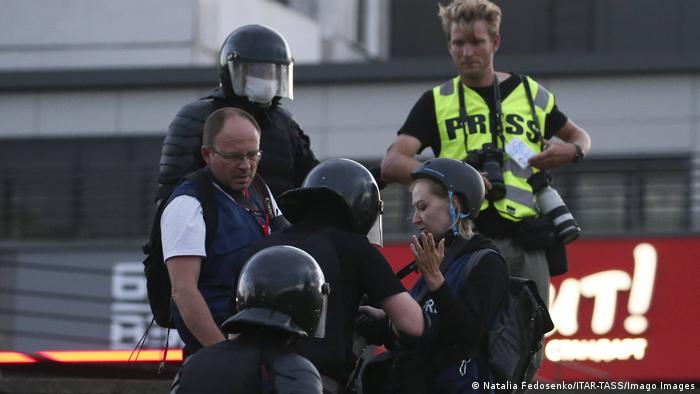 During months of ongoing protests against Belarus President Alexander Lukashenko, authorities have kept independent media in the country in their crosshairs. Journalists have frequently been detained for days on end and been accused of taking part in demonstrations. They have been beaten, their equipment destroyed and their accreditation canceled. Sometimes, charges have been pressed against them. 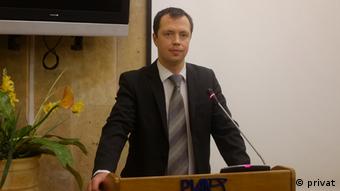 Deutsche Welle: What is it like working as a journalist in Belarus these days?

Boris Gorezkij: It's like walking through a minefield. Journalists go to report on protests and get arrested and locked up for days on end. They are also detained because of the articles they write. And charges are filed against them.

The authorities do whatever they can to restrict the work of the media. They have blocked access to more than 100 websites, including news sites. The country's biggest online news outlet, TUT.BY, recently had its credentials revoked by the government and remains under pressure.

While it is still possible to circumvent internet censorship, it is impossible to print newspapers without access to printing equipment. A number of newspapers can no longer be published, which is very sad. In addition, the authorities are hindering the work of foreign correspondents. Foreign journalists simply don't receive media accreditation. We know of about 150 such cases. On October 2, the Belarus foreign ministry canceled all remaining accreditations and is only issuing new ones very selectively — mainly to Russian media outlets. Most foreign journalists are simply denied a renewal [including DW correspondents].

What would you say is the worst abuse carried out against a journalist since the protests began?

The worst case was when journalist Natalia Lubnevskaya from the Nasha Niva newspaper was directly shot at. The soldier must have seen who he was shooting at — she was wearing a press vest. The shot that hit her was fired from just a few dozen meters away. That was clearly a crime. Journalists are also being beaten while in custody, which is awful. The worst abuses are when journalists are subjected to physical violence.

On top of that, nine journalists are currently facing legal proceedings. For example, they have been accused of organizing unsanctioned protests. And yet, all they were doing was reporting on protests via livestream.

How are you responding to the violence being meted out to journalists?

You can never get used to violence. The authorities have done everything they can to get journalists off the streets. Journalists are being arrested at almost every protest. Some of my counterparts have decided to stop filming the demonstrations because of the dangers involved. Others have stopped wearing their blue vests with the inscription "Press" on them because they feel it makes them more likely to be picked out of crowds and arrested. But many journalists continue to report professionally, even under these conditions — despite the pressure and the repressive measures.

Are journalists themselves taking steps to protect their own safety?

Many news organizations have been asking ordinary people to give journalists access to their nearby apartments or balconies so that they can report on the protests safely, without having to be on the street. But that doesn't always work. Journalists working for Belsat TV were recently arrested in an apartment from which they were reporting live. Security forces simply kicked in the door down.

Mobile internet access has been frequently switched off throughout the course of the protests and there was a complete internet blackout from August 9 to 11. How can journalists relay objective information when they are working under such conditions?

Journalists working in the field always try to find a Wi-Fi connection. So they shoot their material first and then look for a café or apartment with an internet connection from which they send their photos and videos back to the newsroom. Many news organizations have asked people living in ground floor apartments to make their internet connections freely accessible. That works but it takes a lot of time because the connections are slow.

Reports about where the demonstrators are heading, for example, or what is happening at the moment, are also conveyed via telephone. But that makes journalists vulnerable. Oleg Grusdilovich reported on a protest like that. The authorities caught wind of it, went to his home and sentenced him to 15 days in prison. Still, there is no other way to report right now.

Recently, the Belarusian Association of Journalists (BAJ) received the first Media Freedom Award from the Canadian and UK governments. What does this prize mean to you?

We are very grateful to Canada and the UK for supporting Belarusian journalism at such a difficult time. That support is not just for us as an association but for all Belarusian journalists. Right now it is very important that the outside world hear about the suppression of media in our country. The more international attention the beatings and arrests of journalists in Belarus gets, the more room we have to maneuver.

What can an NGO like yours do when the authorities break the law? How can you support journalists?

One of the most important tasks of the Belarusian Association of Journalists has always been providing legal support and protection for journalists. Unfortunately, we have very little means to provide such protections now because the law no longer functions in Belarus. You can prove you have not broken the law as often as you like but journalists are still being charged with allegedly participating in the protests even when they were, for example, in a hotel room and shooting footage from a distance.

At the same time, there are cases in which our legal team has prevented journalists from being jailed. It is also important to provide both psychological counseling and medical assistance. Sometimes we face unusual problems: For instance, we provide food to journalists who are in custody but don't have any relatives in Belarus to help them. We also try to help when journalists' equipment is confiscated.

This interview was conducted by Bogdana Alexandrowskaja.