Every month, the One Free Press Coalition draws attention to unresolved cases of crimes against journalists. This month, the list focuses on killed journalists whose cases have not been brought to justice. 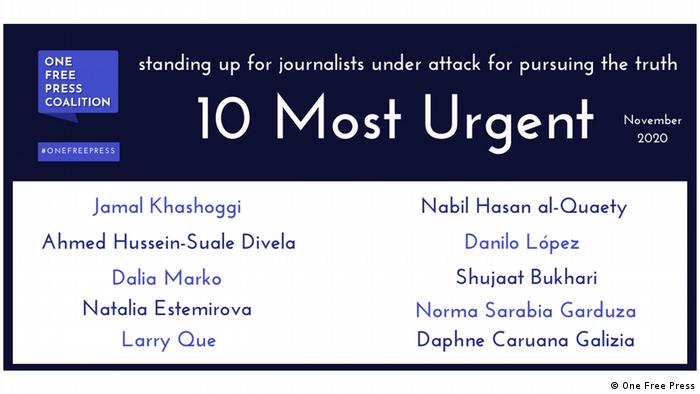 Since 1992, when the Committee to Protect Journalists began collecting data, 883 journalists have been murdered. According to CPJ’s annual Global Impunity Index released in October, Somalia, Syria, Iraq and South Sudan are the four countries with the greatest number of unsolved murders targeting the press, calculated as a percentage of the country’s population.

Globally, the number of journalists murdered in reprisal for their work was the lowest in 2019 that CPJ has recorded in any year since 1992. The reason is difficult to pinpoint, due to self-censorship, the use of other tools to intimidate reporters, and the high-profile nature of some recent cases potentially playing a role.

Jamal Khashoggi, former editor-in-chief of the Saudi newspaper Al-Watan and columnist for The Washington Post, was killed by a team of Saudi military and intelligence officials on October 2, 2018, shortly after entering the Saudi consulate in Istanbul. Turkish and Saudi courts have tried and sentenced several suspects in the case. It was revealed in September 2020 that, after Khashoggi’s murder, U.S. President Donald Trump admitted to helping shield Crown Prince Mohammed bin Salman, who ordered the journalist’s murder according to a report released by the CIA. A current lawsuit against the U.S. intelligence community seeks the release of documents that may provide information on its awareness of threats to Khashoggi’s life.

In 2018, a member of parliament during a TV appearance threatened and encouraged violence against Ahmed Hussein-Suale Divela, and Divela had said he feared for his life. A member of the investigative journalism outlet Tiger Eye Private Investigations, 33-year-old Divela was shot and killed by two men on a motorbike in January 2019. He was driving in the Madina neighborhood of Ghana’s capital, Accra, and had been assisting government prosecutors with an investigation into corruption within the country’s soccer leagues. A Tiger Eye lawyer has called for charges to be brought upon the member of parliament, in addition to the two suspects. 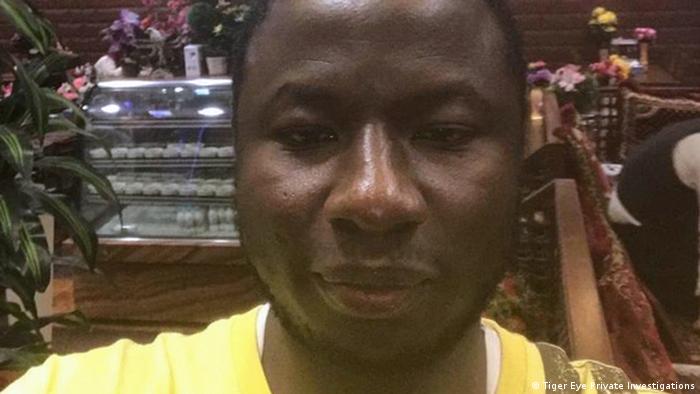 Read more: Facing up to Impunity

Dalia Marko, a reporter for the local radio station Raja FM, was among five journalists killed when unidentified gunmen ambushed an official convoy in South Sudan in 2015. There were 11 victims in total. According to reports, the convoy was returning from Sepo to Raja, having visited families of individuals killed in another attack by unidentified gunmen, when it was attacked with gunfire and machetes and set on fire. The motive for the attack remains unclear, and government spokesmen pointed blame at the time at different rebel groups. This is the deadliest attack on journalists in South Sudan since CPJ began collecting data in 1992.

Since 2000, at least five journalists from independent Moscow newspaper Novaya Gazeta have been killed, including Natalia Estemirova. She also contributed to Caucasus news website Kavkazsky Uzel, served as a consultant for Human Rights Watch and was one of few people reporting on human rights abuses in Chechnya. In 2009, four men forced the 50-year-old into a car in Grozny, the capital of Chechnya, as she was leaving her apartment for work. According to press reports, the journalist shouted that she was being kidnapped as the car sped away, and later that day her body was found in the neighboring region of Ingushetia with gunshot wounds in her head and chest. A colleague believes Chechen authorities were behind the murder, condemned by former Russian President Dmitry Medvedev.

Publisher of weekly community newspaper Catanduanes News Now and owner of a local insurance company, Larry Que was entering an office building in December 2016 when a gunman fatally shot him in the head at close range and escaped on a motorcycle driven by an accomplice. The newspaper had recently published a column by Que alleging “official negligence” over an illegal methamphetamine laboratory and naming Catanduanes Governor Joseph Cua as responsible. Que’s wife believes Cua hired a hitman to “silence” Que. She filed a murder complaint, which police said is still under investigation as of August 2020. She also pursued charges of graft and misconduct against Cua; they were dismissed for lack of evidence. 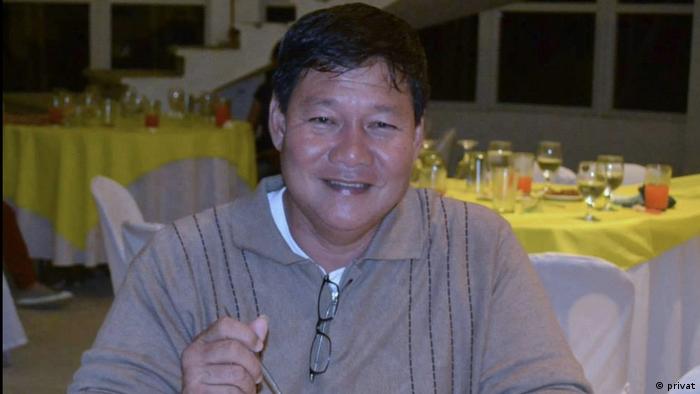 Journalist Larry Que, murdered in December 2016 in the Philippines

Read more: Europe a 'minefield of obstacles and dangers' for journalists

Journalist Nabil Hasan al-Quaety, 34, whose wife was expecting their fourth child, was killed in the southern port city of Aden on June 2, 2020. A group of men in military uniforms attempted to hit al-Quaety with their car as he exited his home and opened fire when he ran, shooting him in the head, chest and hand. The assailants then fled. A freelance reporter, videographer and photographer, al-Quaety had worked with the news outlet Agence France-Presse since 2015. The Yemeni government claims sole authority in Aden, but the city is effectively run by the Southern Transitional Council fighting for separation from the country. Both have condemned the killing, but an official investigation could prove difficult due to this makeup. A spokesman for the secessionist group said it recently embedded al-Quaety as a photographer and speculated that forces within the government may be responsible for his death.

Two gunmen shot Danilo López in March 2015, while the reporter for Guatemala City daily Prensa Libre was walking in a park with a fellow journalist. In more than a decade with the newspaper, López had often written about corruption and misuse of public funds and had received threats in connection to his reporting. The case awaits a murder trial against Julio Juárez Ramírez, a former lawmaker who has been charged with orchestrating the attack and sanctioned by the U.S. Treasury Department under the Global Magnitsky Act. Courts sentenced the getaway driver to 30 years in prison, charged but have not arrested the alleged gunman and acquitted two other suspects. Authorities believe the case may be linked to an organized crime network working with a drug cartel and transferred the case to a special court in the capital in 2015 after local prosecutors investigating the crime received threats.

Four suspects are yet to be charged in the June 2018 killing of Shujaat Bukhari, founding editor of Rising Kashmir newspaper. Several unidentified gunmen fired at him as he was leaving his office for an iftar party. He suffered injuries to the head and abdomen and died, as did two police officers who had been assigned to protect him after an attack in 2000. In the days preceding the incident, Bukhari had requested additional security amid the conflict-ridden situation in Kashmir.  Police claimed that Lashkar-e-Taiba, a Pakistan-based militant group was responsible, but the group has denied involvement. In November 2018, police and the army killed one of the prime suspects in a shootout. There have been no updates in the case since. 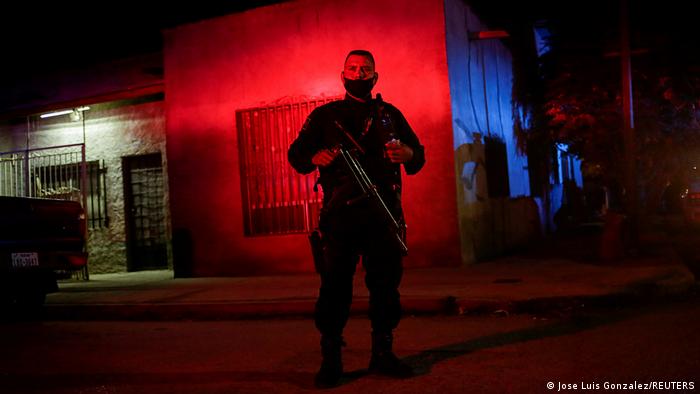 Journalist Arturo Alba was murdered in Ciudad Juárez, Mexico, making him the sixth journalist murdered in Mexico in 2020. The photo shows a police officer at the crime scene.

In June last year, unknown attackers shot and killed reporter Norma Sarabia, 46, at the front door of her residence in Huimanguillo, in the southern state of Tabasco. She had received frequent death threats as a correspondent for newspapers Diario Presente and Tabasco HOY and had recently reported on a series of violent crimes, including murders and a kidnapping. Soon after her death, the Tabasco state attorney general’s office said in a statement released on Twitter that it had opened an investigation. To date, however, there has still been little movement in the investigation. Sarabia is one of 56 journalists killed in Mexico since 1992.

Daphne Caruana Galizia, a prominent journalist who reported on corruption and helped cover the Panama Papers, was killed in Malta in October 2017 by a car bomb near her house. Her widely read blog, Running Commentary, included investigative reports and commentary on politicians. Former Maltese Prime Minister Joseph Muscat considered Galizia a harsh critic of his but condemned the “barbaric” attack and stepped down in January 2020 over the political crisis that sparked after the case. Four men have been in detention—some since December 2017—but no trial date has been set. CPJ and 18 other organizations have called on authorities to prevent political interference in the investigation.

A television journalist was found dead in Mexico's Ciudad Juarez after being shot at least 11 times. Arturo Alba Medina is at least the sixth journalist to be murdered in Mexico this year.

Russian journalist dies after setting herself on fire

The editor of a Russian news site self-immolated after police searched her apartment. Russian authorities said Irina Slavina was a witness in a probe into a group funded by Kremlin critic Mikhail Khodorkovsky.