The presidents of the United States and Russia traded warnings over Ukraine — yet expressed some optimism for further diplomacy to help ease the heightening tensions. 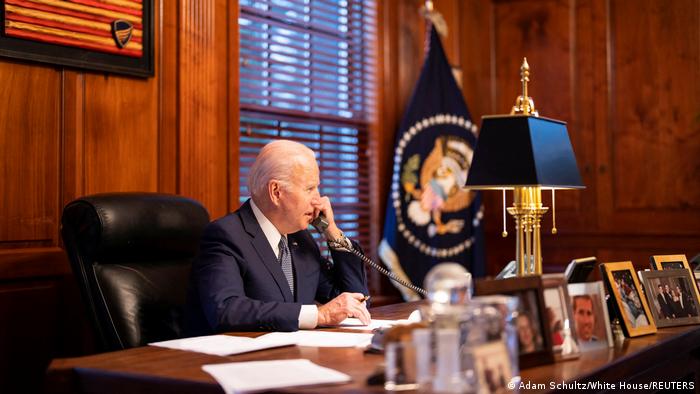 US President Joe Biden spoke with his Russian counterpart Vladimir Putin for almost an hour on Thursday, agreeing to continue and advance their dialogue ahead of a meeting in Geneva early next year.

Their second call this month came amid growing Western concern over Russia's troop buildup near Ukraine. The simmering crisis has recently deepened as the Kremlin stiffened its demands for increased security guarantees.

What did Russia say about the call?

"We are in principle satisfied with the contact that took place, with the negotiations, because they were frank, substantive, and specific. I would say that the general direction of the conversation was quite constructive," Russian spokesman Yury Ushakov told reporters after the meeting.

"It's important that the American side was willing to understand the logic and the essence of the Russian concerns that were outlined in the two documents that we sent to Washington and to NATO headquarters," he said, noting that Washington did have some concerns.

Putin: 'There were five waves of NATO expansion'

Responding to Biden's threat of sanctions if Russia invades Ukraine, Putin said that such US move could lead to a complete rupture of ties between Moscow and Washington.

"It would be a colossal mistake that would entail grave consequences,'' Ushakov said about US sanctions.

He added that although the two exchanged pleasantries, the call was a concrete political development.

What about the US?

According to the White House, Biden told Putin that the United States and its allies will respond decisively if there is an invasion of Ukraine.

"He made clear that the United States and its allies and partners will respond decisively if Russia further invades Ukraine," she added.

The call, which came at Putin's request, was the second conversation between them this month, with Biden earlier warning Putin of severe consequences if Russian forces were to launch a further incursion into Ukrainian territory.

Washington and Kyiv have accused Russia of amassing about 100,000 troops at Ukraine's border, possibly in preparation for an invasion. Russia maintains no invasion is planned and that it is free to move its own forces how it pleases within Russian territory.

Since 2014, Russian proxy forces have remained active in Donbass, the industrial region in Ukraine's east. That year, Russia occupied and annexed Crimea, an act recognized by very few countries as legal.

Russia recently published a list of requests that it wants from Washington, including security guarantees and no eastward expansion of the NATO military alliance.

And on Friday morning, Russian Foreign Minister Sergey Lavrov said Moscow will "take all necessary measures to ensure a strategic balance and eliminate unacceptable threats" should Washington not respond constructively to its proposals, the RIA Novosti news agency reported.

After much back and forth, the two countries have scheduled January 10 to meet in Geneva. Those talks will be led by US Deputy Secretary of State Wendy Sherman and Russian Deputy Foreign Minister Sergei Ryabkov, Moscow said.

In Thursday's call, Putin told Biden that they were interested in results, rather than negotiations, and would see how things go after two or three rounds. Ushakov said the talks might lead to a normalization of ties.

The White House said Biden had agreed to a pragmatic and results-driven negotiation.

According to Ushakov, the two agreed that talks on security guarantees will be held in three tracks: bilateral Russia-US talks in Geneva, Russia-NATO talks in Brussels and OSCE talks in Vienna.

The Geneva talks will not include Biden and Putin like last June, when the US sought greater predictability and stability in relations with Russia. The military build-up on Ukraine's borders since then has done much to quell Washington's hopes.

Russia: Security talks with US and NATO set for January

The West has expressed concern over Russia's military intentions. Moscow is also seeking assurances from NATO over Ukraine joining the alliance.

As troops gather at the Ukrainian border, the Russian president is pushing Western leaders to end NATO's eastward expansion.