The two leaders talked via videolink amid a tense standoff over Ukraine. US officials said Russia would face severe sanctions if troops crossed the border into Ukranian territory. 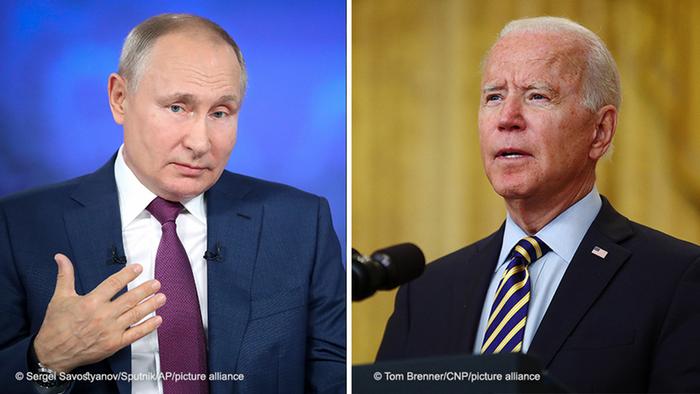 Russian state TV called the tone of the call 'friendly'

Biden was to warn Putin against invading Ukraine, threatening painful sanctions and more US military support for Eastern Europe if the Russian leader triggers a military conflict.

The Kremlin released a short video clip in which the two leaders exchanged friendly greetings, though it did little to disguise tensions between Washington and Moscow.

Ahead of the talk, US officials said that Washington was prepared to impose its toughest economic sanctions yet on Moscow if necessary, targeting the biggest banks in Russia and making it nearly impossible for them to convert rubles to dollars. 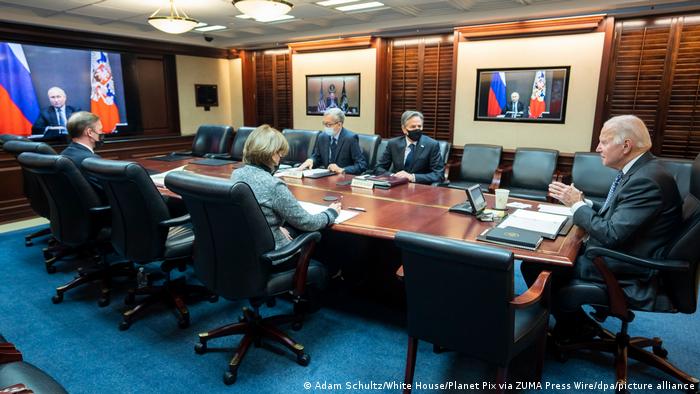 "President Biden voiced the deep concerns of the United States and our European Allies about Russia’s escalation of forces surrounding Ukraine and made clear that the U.S. and our Allies would respond with strong economic and other measures in the event of military escalation," the White House said in a statement after the summit.

The statement also said that "the presidents also discussed the U.S.-Russia dialogue on Strategic Stability, a separate dialogue on ransomware, as well as joint work on regional issues such as Iran."

The Kremlin also issued a statement after the call, saying that Putin had "complained about NATO's dangerous attempts to develop Ukraine" for its own goals, and that he "expressed concerns about Kyiv's provocative actions" towards Ukrainian regions controlled by Russia-backed separatists.

Kyiv and NATO members have recently accused Russia of amassing troops near its border to Ukraine, though Moscow has denied any hostile intentions, calling its troop posture defensive.

Satellite images show troop concentrations not far from the border, prompting fears of war in Europe.

Moscow has called these warnings a sign of "hysteria," instead accusing NATO of threatening Russian security by its increased closeness with Kyiv. Russia has demanded "legal guarantees" that the alliance will not grant Ukraine's request to become a member.

NATO principles state any country should be able to join and no outside country should have veto power on such issues, but the alliance has also made no indication of a willingness to grant Ukraine entry.

The White House promised to brief the governments of Germany, the UK, France, and Italy after the call.

"The leaders agreed to stay in close touch on a coordinated and comprehensive approach in response to Russia's military build-up on Ukraine's borders," the White House said.

A Russian invasion of Ukrainian territory could come with consequences for Germany too.

US approval for the controversial Nord Stream 2 pipeline from Russia to Europe was contingent on Moscow refraining from military provocations. Bloomberg News reported on Tuesday that Washington would pull its approval if Russian troops enter Ukrainian territory.

"Should Russia attempt to use energy as a weapon or commit further aggressive acts against Ukraine, Germany will take action at the national level and press for effective measures at the European level, including sanctions, to limit Russian export capabilities to Europe in the energy sector, including gas, and/or in other economically relevant sectors," the US and Germany had said in a joint statement in July after the deal was struck.

The two leaders spoke just after Biden visited the World War II memorial in Washington to honor those who died at Pearl Harbor on the 80th anniversary of the Japanese attack on the US naval base in Hawaii.

The Day with Brent Goff: Biden & Putin on Ukraine

Biden and Putin to hold video call over Ukraine tensions

DW talks to Dr. Andras Racz from the German Council on Foreign Relations