Japan′s ′appalling′ gender equality record puts spotlight on sexism | Asia | An in-depth look at news from across the continent | DW | 05.04.2021

The country's poor ranking in the WEF's gender gap index has caused embarrassment and triggered calls for change to support female empowerment. 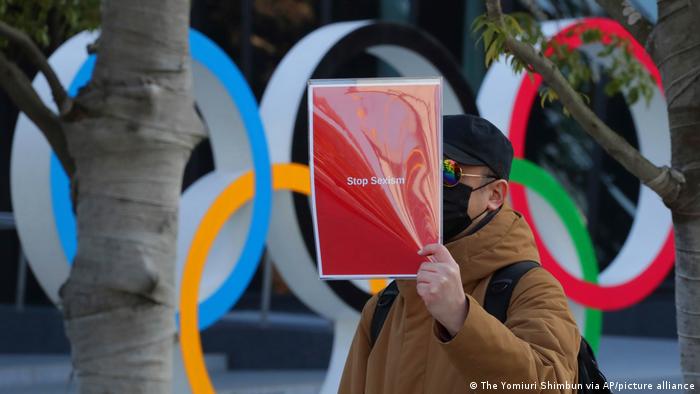 Yoshiro Mori, a former prime minister who was head of the organizing committee for the Tokyo Olympics, had to step down after making sexist comments

Japan is ranked a lowly 120th out of the 156 nations on the World Economic Forum's (WEF) Global Gender Gap Index for 2020, highlighting the stark gap between the genders in terms of political empowerment and economic opportunity.

Released in late March, the WEF index measures the disparity between men and women in countries around the world and Japan actually climbed one place from last year's 121st position, the worst ranking that it has ever recorded.

Nevertheless, Japan is still below places like Angola and Ghana, and only marginally ahead of Sierra Leone.

The Asahi newspaper announced the findings of the study under a headline that declared, "Japan still ranks dead last among G-7 nations in gender equality."

Japan's nearest G-7 rival was Italy, in 63rd spot, while Germany topped the G-7 rankings, coming in 11th place worldwide. It was followed by France in 16th place, the United Kingdom at 23rd, Canada at 24th and the United States in 30th spot.

Iceland came out at the very top of the Switzerland-based think tank's rankings, the 12th time it has topped the list, followed by Finland, Norway and Sweden.

'It is extremely depressing'

Japan's overall score could have been far worse, but the country's position was boosted by relatively high figures for health and survival as well as educational attainment.

Still, the nation was badly let down in its scores for economic participation and, in particular, political empowerment.

Japan was in 147th place in terms of women in politics, a figure that is largely determined by the number of women in a nation's parliament. Just 9.9% of members of the House of Representatives are female and just two of the 21 members of the cabinet are women. Japan also came in a lowly 117th in the economic field, which is primarily based on the ratio of women among senior managers.

"It is extremely depressing," said Noriko Hama, a professor of economics at Kyoto's Doshisha University. "I see the figures and I look around me, and I just struggle to understand it."

Hiromi Murakami, a professor of political science at the Tokyo campus of Temple University, echoes that view, telling DW that the results of the study are "almost unbelievable."

But evidence of the appalling state of gender equality is evident on a daily basis, she said.

Women have borne the brunt of the job losses brought on by the coronavirus pandemic as they make up a disproportionately large number of the part-time employees in Japan, primarily because women are still expected to take care of the home and raising children.

But this is a society in which men still tend to make most of the decisions, such as over the long-running question of whether women should be permitted by law to retain their maiden name after marriage.

In recent hearings of a panel set up to consider the matter, the mostly male members of the Liberal Democratic Party, the right-of-center ruling part of Prime Minister Yoshihide Suga, said the suggestion was unacceptable because it would cause "confusion."

"The United Nations has called on Japan to look at this matter and, in the past, the reply has been that there is not enough public support to change the law," said Murakami.

"But we have seen that there is growing public recognition of the problem and there is sufficient support for a change."

And that gives her hope. That and the sexist remarks of Yoshiro Mori, a former prime minister who was head of the organizing committee for the Tokyo Olympics until he had to step down after causing a storm of outrage after claiming that meetings involving women dragged on because they "talked too much."

"I think those comments really triggered an angry backlash from the public," Murakami said. "It was the moment that the scale of the problem really sank in for many people."

The other catalyst has been the issue of succession of the imperial family, which is running out of male heirs.

By law, only a man can assume the Chrysanthemum Throne but there after the present emperor, there are only two male members of the imperial family who are eligible for the position, the emperor's younger brother and his 14-year-old son.

Should Prince Hisahito not have a son of his own, the imperial family would be effectively extinct.

That has forced the government to set up a panel to consider revisions to the law, one of which will be allowing an empress to reign over male-dominated Japan — although the very idea is abhorrent to many conservatives and nationalists.

'Hoping for a generational change'

"It's appalling that we even have to have this debate, but on the plus side it is serving to concentrate people's minds on the broader issue and that, I feel, is long overdue and very good," said Hama. "And that's what makes me optimistic."

Hama believes that much of the problem lies with the older generations of Japanese men, who almost assume they are superior to women and that they should be in charge of making decisions.

"So, I am hoping for a generational change," she said. "I think that a lot of younger Japanese men do not look at women in this way and do consider women to be their equals in the workplace and in society. These are men who would have no problems at all in taking orders from a female boss.

"I would argue that all we need to do is to be patient and wait for the older men to depart,” she added. "In that sense, Mori may have done a great service for future generations of Japanese women."

Writer Yumi Ishikawa has started a petition to end the practice of requiring women to wear high heels at work. The government has said it is reviewing the request to ban the requirement as sexual discrimination.