With men dominating Japanese society, politics, the media and upper echelons of the business world, women have been reluctant to break social norms to reveal instances of sexual harassment. But that may soon change. 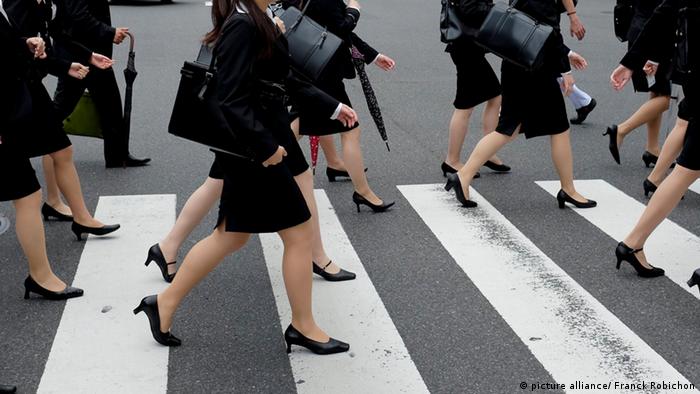 When Keiko was in her early 20s, she fell asleep on a nearly empty train on her way home after work one evening. She only woke up when she sensed she was being groped, but the man fled the stationary train before she could protest or even see his face. Keiko, who does not want her full name to be divulged, never filed a complaint with the police or even told her parents, although she says she was more careful after the incident.

"I was embarrassed, I suppose," she  said. "I didn't want to cause a fuss and it would have been shameful for me to have to explain what had happened to the train station staff or the police, so I just put it out of my head."

Even today — as the #MeToo campaign gains traction in more countries worldwide and more women are coming forward to denounce the powerful men who have sexually abused them — Keiko says she would probably not report a similar incident.

"I suppose it is part of Japanese culture; do not be the one who makes an accusation that upsets the social harmony," she says with a shrug. "It's just the way it is."

The experiences of journalist Shiori Ito go some way to explain why so many women opt not to go public with accusations of sexual assault against men in this still male-dominated nation. Ito accused a prominent television journalist of raping her in 2015 after she passed out during a dinner meeting to discuss job opportunities.

During subsequent press conferences, she described the alleged attack as horrific, although the authorities' reaction to her story was no less shocking. A rape victim support center refused to give her advice over the phone, a women's clinic had no in-house procedures on dealing with rape victims, and the police made her relive her trauma in explicit detail, which included the use of a life-size doll to represent her assailant.

It took the police three weeks to open a formal investigation into the well-known suspect. The case was subsequently dropped with prosecutors claiming there was insufficient evidence for a conviction. Ito demanded that another legal panel reconsider that decision, but it reached the same conclusion.

Ito has now filed a civil lawsuit against the journalist — who has denied any wrongdoing and written magazine articles giving his side of the story — demanding 10 million yen (€77,164, $95,560) in compensation.

A government study has stated that just 4.3 percent of Japanese women who were victims of sexual violence reported it to the police. Official statistics also show that only a third of rape cases reach court in Japan, with a mere 17 percent of those found guilty receiving prison terms of three years or longer.

Why fewer Japanese are seeking marriage

"Not speaking out is rooted in Japanese culture. Traditionally, people here are not accustomed to revealing details about themselves or sharing personal issues in public," Makoto Watanabe, an associate professor of communications and media at Hokkaido Bunkyo University, told DW.

"And society looks down on people who do break that unwritten rule."

Watanabe added that a big part of the problem is that Japan is a very male-dominated society, with relatively few female politicians — and even fewer with real influence.

"The media here is also dominated by men — and they simply do not see #MeToo as a story in Japan."

This has over time made women feel quite helpless and unable to have a real voice in issues that are of importance to them, although Watanabe senses that change — however slow — is afoot.

"In my university, I see a new generation of young women who are more active and willing to speak out than in the past. These are women who want a career and are not willing to simply accept a lesser position because of their gender. If they are better than a man, they do not mind saying it."

There is growing evidence to support that belief, with writer Haruko Ito — who uses the pen name Ha-Chu — revealing last year that she had faced sexual and "power harassment" from a male superior when she worked for the advertising agency, Dentsu.

On March 1, it was reported that Kaori Icho, a four-time Olympic wrestling champion, had been harassed by a senior official of the sport's ruling body in Japan. Icho has filed a complaint with the Cabinet Office against Kazuhito Sakae, who she claimed had interfered with her training regime after they disagreed about it in the run-up to the 2016 Olympic Games in Rio de Janeiro. Sakae has denied the claims.

Watanabe explained that in the past, topics that started off as minor issues — a shortage of kindergarten places is a good example — quickly grew into nation-wide movements when people realized that it was their opportunity to make a change.

"It is possible that we could see the same thing happening here. I certainly hope so."

Reports from Iraq suggest that as many as five Japanese are among those detained after the fall of an "Islamic State" stronghold near Mosul. Why did they leave safe and peaceful Japan to live in a war zone? (13.09.2017)

Gender stereotyping, lack of financial and party support, an unfavorable electoral system and discrimination in the male-dominated society are blamed for the lack of women in Japanese politics. Julian Ryall reports. (08.07.2016)

Kensuke Miyazaki made waves in Tokyo when he and his wife, a fellow MP, pushed for paternity leave. Now, the politician from the ruling Liberal Democratic Party has been forced to quit over an affair scandal. (12.02.2016)