Writer Yumi Ishikawa has started a petition to end the practice of requiring women to wear high heels at work. The government has said it is reviewing the request to ban the requirement as sexual discrimination. 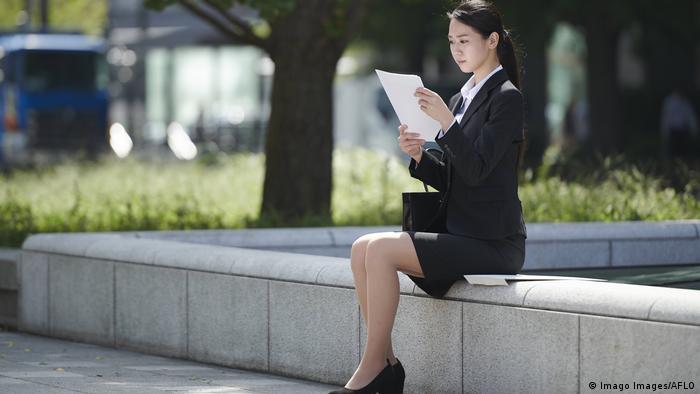 Nearly 20,000 women had signed an online petition in Japan by Tuesday afternoon, asking the government to ban companies from requiring high heels as part of work dress codes. The petition was started by freelance writer Yumi Ishikawa, who says she was required to wear the uncomfortable footwear for her part-time job at a funeral parlor.

"After work, everyone changes into sneakers or flats," she said in the petition, highlighting the health effects of wearing heels every day, including back pain, bunions, and blisters.

She then looked at her male colleagues, she added, and it was clear that they did not have the same uncomfortable expectations for their attire.

"Aren't there a lot of women out there having a hard time?" she asked, saying she hoped her petition would "make it easier for everyone to work, creating a working environment free from unnecessary burdens."

Ishikawa's movement has been dubbed the #KuToo campaign, which is a play on two Japanese words — kutsu, meaning shoes, and kutsuu, meaning pain. In the 24 hours since it began, many Japanese women have already begun speaking out about being expected to wear high heels to job interviews or in the office every day.

After a meeting at the Labor Ministry, Ishikawa told reporters that she had met with a female official who seemed sympathetic to the cause.

"Today we submitted a petition calling for the introduction of laws banning employers from forcing women to wear heels, as it is sexual discrimination or harassment," she said on the ministry steps.

The Health Ministry is also reviewing the petition.

It would not be the first time in recent history that Japanese companies have had to rethink their enforced or de facto dress codes. In 2005, the Japanese government encourage companies to reduce electricity use by turning down air conditioning in office buildings. As a result, the decadeslong standard for men to wear neckties has slowly begun to ebb away.

In recent years, Japanese women have decried the lack of progress in tackling sexism in institutions across the country. A high-profile example came in August 2018, when it was revealed that Tokyo Medical University had been skewing womens' entrance exam results to benefit male candidates.