A Korean citizens' group is aiming to raise awareness of women forced to work in military brothels with a new memorial. But Japan has said the controversial statue is out of context and only serves to damage relations. 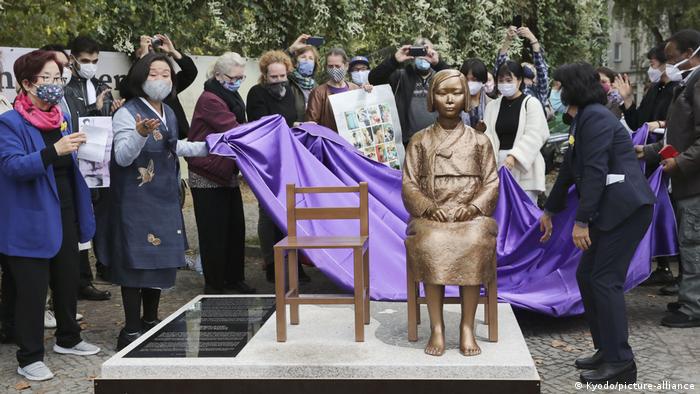 The Japanese government has said it "regrets" the unveiling of statue of a Korean "comfort woman" in Berlin on Monday. Katsunobu Kato, Japan's chief cabinet secretary, said the statue on a busy street corner on Kopfplatz is not in line with Tokyo's efforts to build improved future-oriented ties with South Korea.

"We will approach various parties involved toward the removal of the statue," Kato said in a press conference in Tokyo on Tuesday.

The statue depicts a young woman in traditional Korean clothing sitting on a chair and is accompanied by a plaque detailing sexual violence against women before and during World War II. Korea claims that tens of thousands of women were abducted by the Japanese military and forced to work in front-line brothels for troops during the colonial occupation of the Korean Peninsula.

The statue was funded by the Korean Council for Justice and Remembrance for the Issues of Military Sexual Slavery by Japan and is the third unveiled in Germany, although the previous two were on private land.

The Japanese government has made a number of formal apologies to the South Korean government over the years. The two sides signed an agreement in 2015 that saw Japan pay 1 billion yen ($9 million/€7.67 million) in reparations and issue another apology in return for the issue being "irreversibly resolved."

In 2019, the new government of South Korea headed by President Moon Jae-in unilaterally canceled the agreement, plunging relations between the two governments to a new low from which they have yet to recover. That decision, along with the campaign by civil groups to erect more "comfort women" statues around the world, has infuriated many in Japan.

"I can only ask why the German people, who have permitted this to happen, failed to carry out basic research into the facts of the 'comfort women,'" said Hiromichi Moteki, the acting secretary general of the far-right Society for the Dissemination of Historical Fact (SDHF).

"If they had done that, they would quickly have realized that these women were not forced to become 'comfort women,' that they did it to earn money and that the Japanese military had nothing to do with their recruitment because it was done by Korean traders," he told DW.

The unveiling of the statue is designed to harm the reputation of Japanese people and "is based on lies and fiction," said Moteki. His organization has also denied Japanese responsibility for a massacre that took place in Nanking, China, in 1937, and has insisted that the unannounced attack on US forces at Pearl Harbor in December 1941 was justified. SDHF has also accused the US of perpetrating war crimes by dropping atomic bombs on Hiroshima and Nagasaki at the end of World War II.

Yoichi Shimada, a professor of international relations at Fukui Prefectural University, said he is "angry" at the "egregious propaganda" being pushed by South Koreans.

South Korea 'has done nothing to try to improve the relationship'

"What is particularly irritating is that the South Korean government has repeatedly promised that it would not permit this sort of behavior by Korean people because it was committed to building better relations with Japan – but here we are again," said Shimada. "They have done nothing to try to improve the relationship."

Shimada said the Japanese government has "no choice" but to make a formal complaint to the German government and local authorities in Berlin in an attempt to at least give a balanced explanation to the issue, as the statue "makes no pretense of being fair or neutral" in its depiction of the "comfort women."

Gabriele Vogt, a professor of contemporary Japanese politics and society at Ludwig Maximilian University of Munich, believes the statue is unlikely to damage the image of Japan in the eyes of German people.

"The information that is with the statue does not go into the history of Japan and Korea in great depth and seems to be more focused on what is happening currently in terms of violence against women," she told DW. "It is being framed to resonate with the German public on the ongoing problem of sexual crimes and violence."

Patrick Hein, a lecturer in political science at the Tokyo University of Foreign Studies, pointed out that the relationship between Tokyo and Seoul deteriorated dramatically during former Prime Minister Shinzo Abe's time in office. The ill feeling that now characterizes bilateral ties is unlikely to ease in the near future under the leadership of the new head of government, Yoshihide Suga. 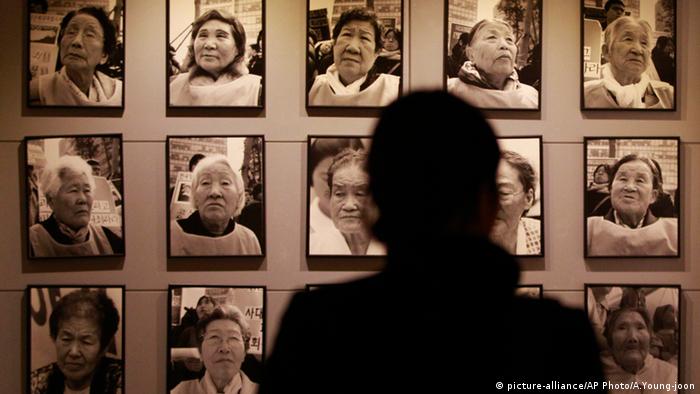 Historical revisionists on both sides

"There are historical revisionists on both sides and the issue is very difficult because it is so emotional," said Hein.

"The two sides can no longer discuss what happened neutrally or unemotionally and both tend to see any attack on them as an attack on their culture. That means there can be no dialogue, and the political culture permits no open discussions," he said.

One of Germany's "greatest postwar achievements," Hein believes, was discussing precisely what had happened in the conflict that wracked the continent and not shying away from difficult conversations on the treatment of forced laborers, prisoners of war and Jewish people. Japan and Korea, however, remain a long way apart on even opening those sorts of discussions.