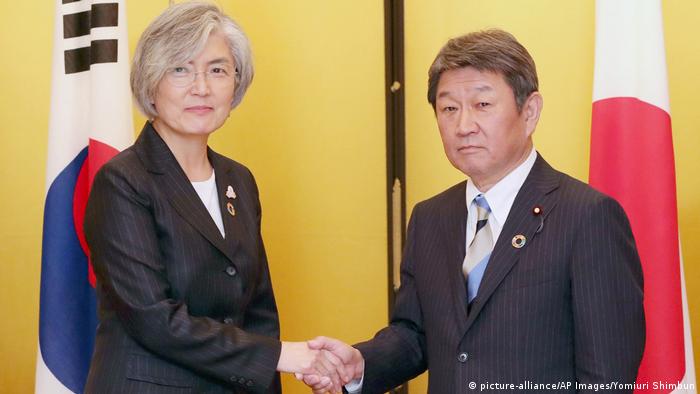 Japan and South Korea agreed Saturday to reopen talks aimed at resolving historical tensions between the two countries, according to a Japanese Foreign Ministry official.

The foreign ministers of the neighboring nations met on the sidelines of a two-day G-20 meeting in the Japanese city of Nagoya.

Relations between Japan and South Korea have been strained by decades of bitterness over compensation for wartime forced laborers dating back to Japan's colonization of the Korean Peninsula before and during World War II.

"We bought time for intense discussions, but there's not much time left for us," South Korea's foreign minister, Kang Kyung-wha, told reporters on Saturday.

Japan's foreign minister, Toshimitsu Motegi, had earlier indicated that he wanted a frank discussion with South Korea to take place.

"I aim to hold a candid exchange of views on the matter of laborers from the Korean Peninsula, which is the core problem, and other bilateral issues," Motegi said.

The spat has intensified in recent months as a result of a simmering trade dispute which has sent the costs of goods rising in both countries.

South Korea made a last-minute decision on Friday to stick with its General Security of Military Information Agreement (GSOMIA) intelligence-sharing accord with Japan. It was set to expire at midnight on Friday and Seoul had earlier indicated it would let it lapse.

The decision by the two US allies was welcomed by Washington, which had pressured Tokyo and Seoul to maintain the pact, seen as a linchpin of trilateral security cooperation amid China's growing influence.

Seoul called for the UN or another international body to investigate Japan's claims that some of its exports go to North Korea despite sanctions. Seoul and Tokyo have clashed over compensation to WWII forced laborers. (12.07.2019)