Japan's Foreign Ministry has summoned the South Korean ambassador amid a deepening diplomatic dispute over wartime compensation. Earlier, an elderly man set himself on fire in protest outside Japan's embassy in Seoul. 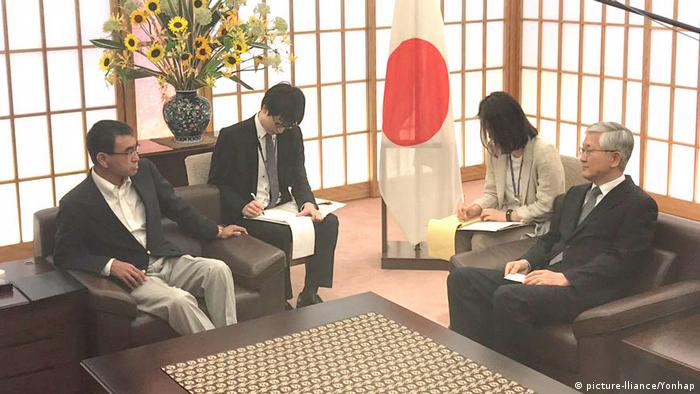 As he met with Seoul's representative in Tokyo, Nam Gwan-pyo, Kono said what its neighbor was doing was "equivalent to subverting the post-World War Two international order."

The two countries are at odds over a South Korean court decision last year ordering Japanese companies to compensate South Korean victims of forced labor during Japan's occupation of the country from 1910 to 1945.

Japan has said that all compensation issues were settled under a 1965 bilateral treaty. Tokyo claims the fact that the South Korean government has not intervened in the court process represents a breach of the agreement.

Seoul's foreign ministry insisted Tokyo should "make efforts to heal the pain and wounds" of the Korean victims for the dispute to be "truly resolved".

South Korea has accused Japan of weaponizing trade in response to the court rulings. Japan has tightened controls on sensitive high-tech exports to South Korea, a move that could affect South Korean manufacturers, including smartphone companies.

In response, Samsung Electronics has sent letters to partners urging them to stockpile more Japanese components in case Tokyo widens its curbs.

Meanwhile, an elderly man set himself alight in a car that was parked outside the Japanese Embassy in Seoul. Police said he later died in hospital.

The 78-year-old man's father-in-law was believed to have been a victim of forced labor by Japanese firms during World War II.

Police and fire officials both declined to comment on his possible motives, citing the fact that investigations were ongoing.

Japan has adopted a more nationalist stance in recent years. Now, a copy of an old German map could help Tokyo legitimize its claims in a dispute with South Korea over geography and terminology. Julian Ryall reports. (27.03.2019)

A 15-year-old Korean girl was duped into moving to Japan in 1944 with the promise of a better education, only to end up working in a munitions factory.

Prime Minister Yoshihide Suga spoke of the damage inflicted on Japan, but did not offer an apology for his country's militarism. His ministers courted controversy by visiting a war shrine for the war dead.