A rescue boat carrying nearly 50 migrants has docked at the Italian island of Lampedusa. Interior Minister Matteo Salvini had denied the ship access to Italian ports, but relented in order to bring aid workers to trial. 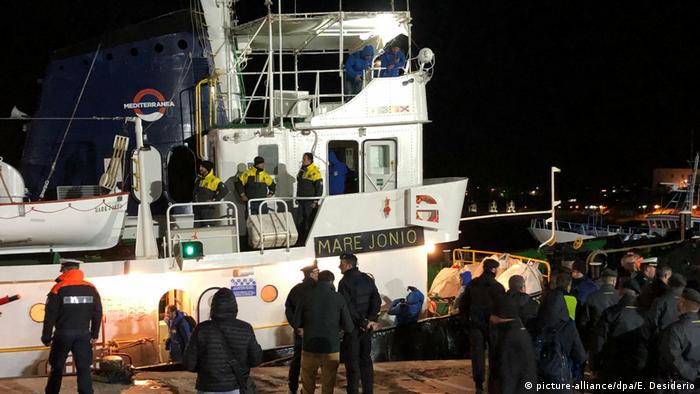 Sicilian prosecutors on Tuesday ordered the seizure of the Italian-flagged ship "Mare Jonio." The rescue boat was allowed to dock at the Italian island of Lampedusa while accompanied by coast guard ships, following nearly two days at sea.

The decision ended a standoff between the migrant rescue boat and the Italian government. Italian Interior Minister Matteo Salvini had earlier ordered authorities to deny the ship access to Italian ports.

Before issuing the permit to dock, prosecutors launched an investigation into possible aiding and abetting of illegal immigration, a move Salvini praised.

"Now in Italy there is a government that defends the borders and ensures respect for the law, most of all for human traffickers," he said. "He who makes mistakes, pays."

The group of 49 migrants, including 12 minors, were rescued by humanitarian group Mediterranea Saving Humans. "Those on board had been at sea for almost two days," the NGO said in a statement. "(They) are exhausted and dehydrated."

Salvini has come under fire for attempting to block migrant rescue boats from docking at Italian ports.

Italy has taken the brunt of a wave of migration after EU member states cut off the so-called Balkan route. Nearly half a million irregular migrants have made the dangerous journey across the central Mediterranean and made landfall in Italy, according to the International Organization for Migration (IOM).

Rome has conceded that saving lives at sea is a priority, but maintains that national authorities must be obeyed and premeditated action to bring immigrants to Italy would amount to facilitating human trafficking.

Italy, with the support of the EU, has trained the Libyan coast guard to intercept boats carrying migrants in a bid to prevent migrants from reaching European shores.

Read more:Follow the money: What are the EU's migration policy priorities?

Italian prosecutors are investigating rescue workers from international NGOs, including some from the German NGO Jugend Rettet. The investigation comes as Italy's populist government cracks down on private sea rescues. (28.07.2018)

Interior Minister Matteo Salvini insists Italian ports "are closed" after the latest docking request by a Spanish migrant rescue ship. The Madrid government later gave permission for the migrants to disembark in Spain. (22.12.2018)

Matteo Salvini is accused of deprivation of liberty and abuse of authority. In 2019, he refused to let a rescue ship dock into Lampedusa, which carried dozens of migrants.

Sea-Watch has been rescuing refugees from drowning for the past seven years. In June 2019, captain Carola Rackete was detained after she entered the Italian port of Lampedusa with 40 migrants on board.