Is Modi-Trump Houston rally an endorsement of India's Kashmir policy?

Indian Prime Minister Narendra Modi has held a rally with US President Donald Trump in the US state of Texas. What implications could the event have for the Indian leader's controversial Kashmir actions? DW analyzes. 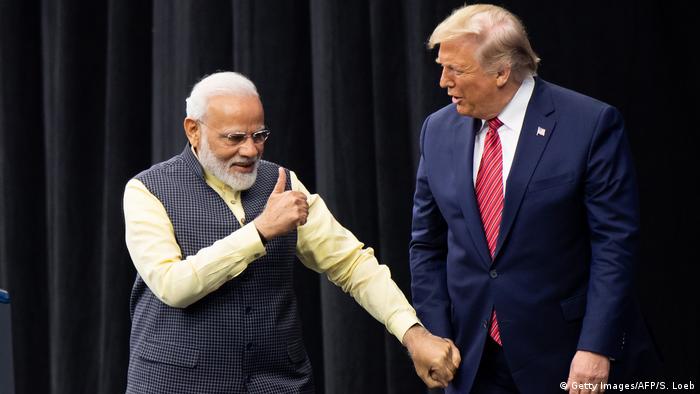 Indian Prime Minister Narendra Modi could not have hoped for a better start to his US trip than addressing a public rally on Sunday with US President Donald Trump at Houston's NRG Stadium.

The Hindu nationalist leader is facing domestic and international criticism over his decision to strip Indian-administered Kashmir of its autonomy on August 5 and send tens of thousands of additional troops to the region, following a rise in attacks in the Muslim-majority region by separatists that India insists are sponsored by Pakistan.

Pakistani Prime Minister Imran Khan, who is also in the US to participate in the UN General Assembly session, is hoping that the international community will admonish Modi for his Kashmir actions. Khan is expected to raise the Kashmir conflict during his meeting with Trump on Monday and in his Friday General Assembly speech, but he has so far received a lukewarm response from world leaders to his country's diplomatic efforts. 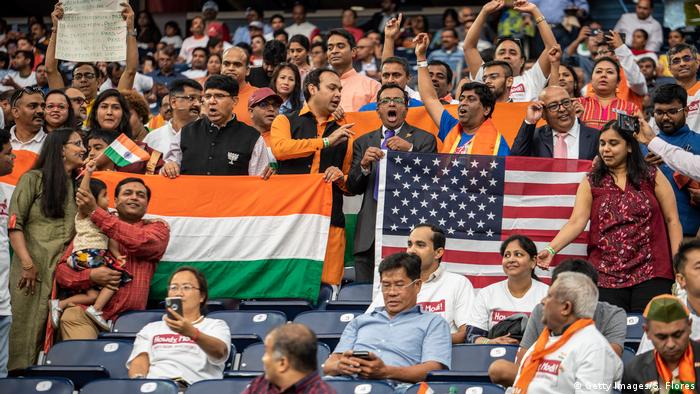 Around 50,000 people, mostly Indian-Americans, participated in the Houston event

Some experts say that by getting Trump to participate in his Houston rally, Modi has likely already won the diplomatic battle over Kashmir.

Addressing the Indian-American community at the Sunday event, Trump said: "We are committed to protect ourselves from radical Islamic terrorism. To keep our communities safe, we must protect our borders. Border security is vital to [the] US and India. We understand that."

Biswajit Dhar, a professor at the Jawaharlal Nehru University in New Delhi, told DW that the Trump administration has always backed India's viewpoint on Kashmir, treating it as India's internal matter. "If PM Khan was expecting President Trump to raise the Kashmir issue, he would be disappointed," Dhar said.

Organizers of the "Howdy, Modi!" event said up to 50,000 people attended the Modi-Trump show.

"Trump is completely welcomed by the community," said Preeti Dawra, a spokeswoman for the Texas India Forum that organized the event, ahead of the rally. "His presence is an indication of his support and endorsement of the strengthening of India's relations with America. This event is about strengthening those ties," she added.

"Modi's coming here shows the importance of the Indian-American diaspora for him," Dawra said.

Modi and Trump enjoy excellent personal relations, but the Sunday event is also expected to improve trade relations and further boost security ties between the US and India.

Donald Trump: 'I'd love to be a mediator'

The event "shows the personal chemistry and friendship" between Modi and Trump and "sets a bold precedent which is unconventional and unique," said Harsh Vardhan Shringla, the Indian ambassador to the US.

Dhar said that bilateral trade between India and the US increased significantly during 2018-19, making the US India's largest trade partner, overtaking China. "There are some outstanding issues that could be resolved through more intensive bilateral dialogue," Dhar told DW.

Trump is also keen to win over the Indian community in Houston, a Democratic stronghold in the Republican-dominated Texas, a state that will be critical to the US leader in his 2020 reelection bid.

Indian-Americans comprise 1% of the US population — with a population of about 4 million. They are also among the wealthiest communities in the US. About 300,000 of them live in Houston and nearby Dallas, according to a Pew Research Center analysis of US census data. Wary of Trump's anti-immigrant messages, some 75% of these people voted for his Democratic rival, Hillary Clinton, in 2016.

Since August 5, an estimated 4,000 people have been arrested in the Jammu and Kashmir region, according to a report dated September 6, although many people have since been released.

Read more: Anger boiling over in Kashmir amid continuing lockdown

The arrests come as authorities attempt to crack down on protests and unrest in the weeks since the region was stripped of its special status.

India's removal of the autonomous status of Jammu and Kashmir has strained ties with Pakistan, which has also claimed parts of the region.

The Indian-controlled region has also experienced frequent communication blackouts since August 5. Pakistan's ambassador to Germany told DW on September 12 that India must end this lockdown in order to restore diplomatic relations with Pakistan and find a solution to unrest in the area.

Pakistan and India both rule the disputed Himalayan territory of Kashmir in part, but claim it in full. The restive region is a flashpoint between the nuclear-armed archrivals. China, too, has some territorial claims in the area.

Some US politicians and Congress representatives have slammed Modi for human rights violations in Kashmir. But analysts say that Trump joining hands with Modi will be seen as an endorsement of his policies.

Anwar Iqbal, a Washington-based analyst, told DW that the Howdy, Modi! event is "not necessarily an endorsement" of Modi's Kashmir policy, "but it does show India's growing global importance."

"The US sees India as a major player in world affairs and wants it on its side," the expert said.

Kashmiri-American groups protested against Modi and the Kashmir lockdown outside Houston's NRG Stadium.