The German consulate in Irbil is helping Iraqi refugees overcome bureaucratic obstacles on their way to rejoining family members in Germany. Judit Neurink reports from Irbil. "I miss him so," Mahdia, 17, says, as tears roll down her face. Her twin brother Mehdi fled to Germany a while ago and she is now with their family in the office of the International Organization for Migration (IOM) in the Iraqi Kurdistan capital of Irbil to prepare the paperwork needed to join him there.

Her father, Abas Khalil Elias, wipes his eyes too. He looks haggard after living in a camp for the past three years, trying to feed his eight remaining children by working on the fields. Before the "Islamic State" (IS) group entered their village of Khanasur in the Yazidi province of Sinjar in August 2014, he was a driver. The Yazidi family fled to the Sinjar mountains where a corridor was created to keep them out of IS' hands. Thousands of other Yazidis were not so lucky; IS captured at least 6,000 women and children and killed thousands of men.

"I am afraid IS will come back," says Mahdia, who quit school to help her father earn money on the fields.

The family of 11 are among 200 people who are granted access on a daily basis to the IOM's Family Assistance Program (FAP) center to prepare for their visa application for Germany. The center in Irbil is an open space, bustling with activity. Case workers speak to clients while others wait for their number to appear above the counters. A photo booth has been installed near the entrance so people do not have to go outside if pictures are needed. To allow parents to focus on their interviews, children have a playroom full of toys at their disposal under professional supervision.

The procedure starts with an online registration, followed by an appointment at the IOM office to assess the necessary paper work and identification such as fingerprints. An IOM staff member delivers documents and digital information to the consulate. Only occasionally are people called in for extra information - the files are usually sufficient basis for a decision regarding visa applications.

"When we started last February, some people had been waiting for a year," FAP team leader Akram Jaafar told DW. The German Consulate in Irbil had such a backlog of applications that it asked IOM to set up this center similar to those in Turkey and Lebanon. Their main applicants are Syrians and Iraqis with a family member who is a recognized refugee in Germany, most of whom arrived in 2014/15 when thousands of asylum seekers traveled illegally from Turkey to Greece and then on to Germany. Some 380,000 have since been granted a refugee status and qualify for family reunion.

The IOM project was set up to stop the flow of illegal migrants and offer Syrians and Iraqis legal ways to get a visa to travel safely to Germany, instead of relying on human smugglers and hazardous routes. 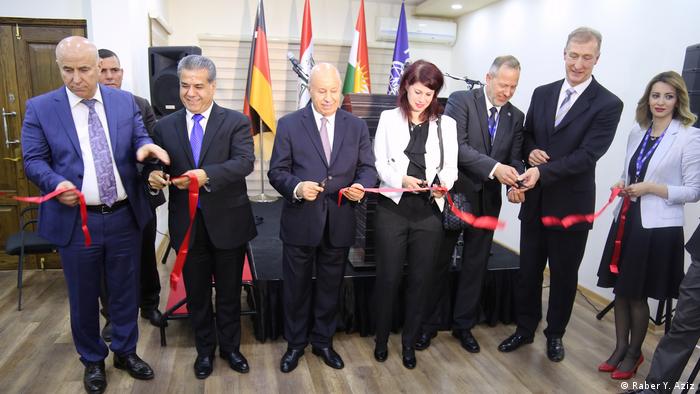 Many resort to dubious brokers who demand up to $5,000 to merely book an appointment at a German consulate or supply a list of documents needed or - worse - pretend they can arrange for an earlier appointment. Akram Jaafar points out that the IOM offers all that for free. Apart from the visa fee, there only is a $9-fee to register in the appointment system.

When asked, most refugees in the office are scared to talk about these brokers, but one woman admits that she paid $1,000 for an appointment and waited for nine months before realizing that it was a scam. One of these so-called brokers, who calls himself Azad Hasso, works through a closed Facebook group with 18,000 likes.

For people used to the Iraqi and Syrian bureaucratic systems, it's normal to seek a "wasta," a relation who will help to smooth the way to the right civil servant - diametrically opposed to the German system with its strict rules and laws and transparent decisions. Behind the high security walls of the German Consulate in Irbil, staff members involved in the procedure are critical of these middlemen who exploit the situation of their own countrymen and con them into paying for worthless services. Many of the appointments they offer are made in the wrong category and are therefore invalid, such as a family reunification with German nationals. This leads to further delays and in some cases to a rejection of their applications.

Special attention is given to cases involving minors who are alone in Germany and are close to turning 18. As soon as they are adults reunification is much more difficult.

Read more: Refugees in Germany lend a hand to displaced persons in Iraq

A new life in Germany

For Mehdi, who is months away from his birthday, the procedure has been expedited to get a decision before that date but it's uncertain whether his twin sister Mahdia will be able to join him; In the cases involving minors, more often than not only the parents receive a visa unless circumstances permit other family members to leave too.

In four months, the IOM has sent over 4,000 applications to the consulate for a final decision - some 1,200 visas have been issued. Thousands of applications are currently being processed in Irbil, Lebanon, and Turkey.

In front of the consulate, in the shadow of the July heat, there is a long queue. "I have my appointment," a woman answers proudly when asked why she is here. The group allows DW to jump the line. They are used to waiting for the chance to go abroad, to start a new life in peace and with a brighter future for their children.