Iranians hope for Europe's support as US sanctions bite

The EU has been leading the efforts to salvage the nuclear deal with Iran following the US withdrawal from the international agreement. But the threat of imminent US sanctions is already having an impact on Iranians. 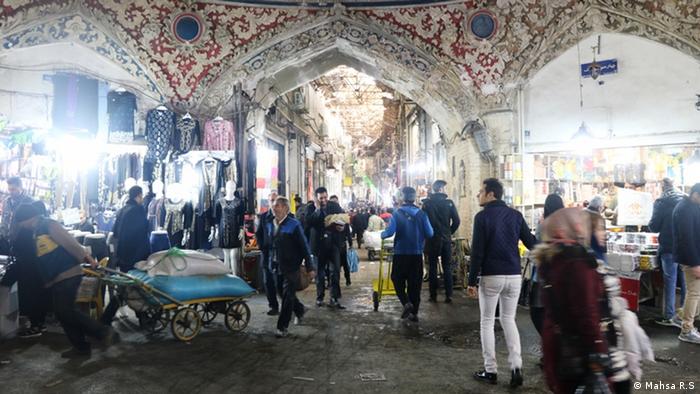 "The most important topic of discussion in Tehran these days is the threat of sanctions against Iran," 51-year-old Azam, a housewife residing in the Iranian capital, told DW. "All I can say is that the mood is very depressing and we do not believe that our politicians can guide us through this crisis."

Azam is furious and afraid at the same time. Her 75-year-old father is suffering from cardiovascular disease and relies on the drug warfarin, which is now in short supply in Tehran. "For the past couple of weeks, it's been difficult to find a drugstore in Tehran that sells warfarin," she said.

For ordinary people in Iran, these are some of the consequences they have to face as a result of international sanctions. Iran doesn't produce warfarin and imports it from abroad. So the drug is now available only in limited quantities and its price has seen a sharp rise.

To make matters worse, Iran currently finds itself in the midst of an economic crisis. Since President Donald Trump decided in May to withdraw the US from the nuclear deal with Iran, the Iranian currency has been in a freefall.

With its exit from the nuclear agreement and the threat of sanctions, not only against Iran but also against foreign companies doing business in Iran, Washington appears to be trying to bring Iran to its knees, at least economically.

Among the most effective instruments at US disposal are sanctions on the banking sector. Experts say the measures would aim to cut off Iran and its financial institutions from the global capital market, to which they only recently gained access following the conclusion of the nuclear agreement.

At the end of June, most European banks stopped their payment transactions with Iran. As a consequence, European companies now face difficulties when it comes to settling payments for their imports and exports with Iran.

"This is ruining our business and our lives," says Esmael, a 38-year-old businessman from Tehran. "We elected Hassan Rouhani because he wanted to make peace with the West. And as we are complying with the international agreement, why should we be punished for the sudden change in US' political position?" he questioned.

Esmael was in Germany twice last year. During his trips, he also visited several trade fairs and wanted to import German food packaging machines, which enjoy a good reputation in Iran due to their reliability. The shift in global political mood, however, has forced him to put his plans on hold.

"Europe can support us and benefit from us at the same time — Iran is a large and stable country in the Middle East. What does Europe have to gain if we sink into chaos?"

Washington's rhetoric and actions with regard to Iran suggest that it intends to pursue regime change in Tehran. To exert maximum pressure on the Iranian regime, the US has been calling on its allies and trading partners to stop oil imports from Iran from November 4, 2018. In a sign of US pressure working, South Korea has already stated that it will comply with Washington's demand from July. Oil exports are the most important source of income for Iran.

Saeed, a 19-year-old student in Tehran, hopes Iran will turn into a free and democratic country. But Saeed believes the current US policy is wrong. "Putting pressure from outside does not help us. The economic crisis is affecting ordinary people like my parents. They are worried of growing costs as a result of the tensions, and they are afraid of war," he said.

President Rouhani visited Europe earlier this week in a bid to rescue his country's nuclear deal with global powers. But after his meetings with officials in Switzerland and Austria, which currently holds the EU presidency, the president was not very optimistic about the deal's future.

"The package proposed by the EU does not contain concrete and practical solutions," Rouhani said on Thursday.

According to the official website of the Iranian president, Rouhani told German Chancellor Angela Merkel in a telephonic conversation that Europe's offer lacked an action plan or a clear roadmap to continue the cooperation.

"We danced on the streets when the deal was signed," says Pegah, a 38-year-old Iranian journalist. "We supported Rouhani and his policies as he represents our interests. The withdrawal from the agreement by the US was a declaration of war on the Iranian people. The EU should support our desire for peace."

At a meeting in Vienna, foreign ministers are trying to save the nuclear agreement. The goal is to make it clear to Iran that it can still benefit from this agreement, said German Foreign Minister Heiko Maas.

"We are now looking for ways to keep payments open for Iran, so Iran does not see any reason to withdraw from this agreement."

Tehran has vowed to "defeat" attempts to curb its oil revenues by allowing private companies to export it. Iran also reminded Saudi Arabia that it was bound to an OPEC agreement to only boost exports collectively. (01.07.2018)