With US sanctions looming, European powers hoped to persuade Iran to remain in the 2015 agreement. The countries agreed to continue talks, although Iran's president has said European proposals aren't convincing enough. 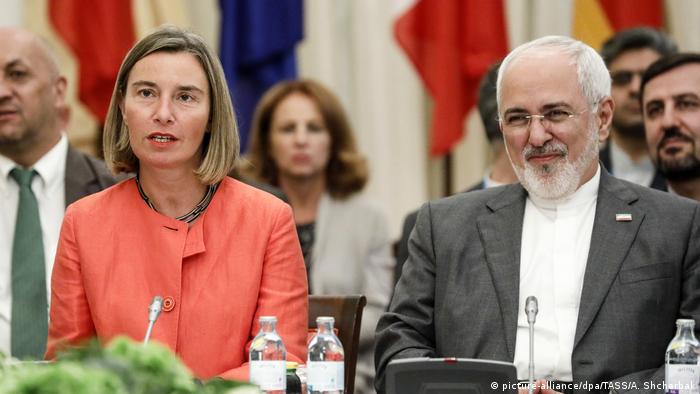 Foreign ministers from Britain, France, Germany, China and Russia met in Vienna on Friday with their Iranian counterpart to discuss an economic plan that could save the 2015 Joint Comprehensive Plan of Action (JCPOA), which was designed to prevent Iran from developing nuclear weapons and took 12 years to negotiate.

The ongoing talks will involve a package of incentives that include European Investment Bank lending, a special measure to protect EU companies from US sanctions and encouraging EU governments to make direct money transfers to Iran's central bank.

Britain, France, Germany, China and Russia also agreed to enlist the help of other countries in order to save the accord.

"The participants will work on the above issues (...) with international partners in order to encourage them to follow the same policies and to establish similar mechanisms in their economic relations with Iran," Mogherini said

Iranian Foreign Minister Mohammad Javad Zarif said that Friday's meeting was a step forward, but that Tehran is still undecided on whether to continue upholding the pact.

"We definitely want to stick to the nuclear deal, but the final decision will be taken in Tehran," Zarif said.

In May, President Donald Trump pulled the US out of the signature accord that his predecessor Barack Obama had signed, calling it "horrible" and "defective at its core."

The White House's retreat from the deal dismayed the remaining five countries, who swiftly signaled their continued support for the accord. But Washington reintroduced sanctions on Iran and threatened the remaining signatories with punitive measures if they engaged in trade and investment with Iran.

The Iranian government has strongly denied planning to build a nuclear bomb and has threatened to resume uranium enrichment for civilian purposes if the deal completely collapses.

In the wake of the US withdrawal, Iran's rial currency has fallen, prices have risen and the country has been hit by street protests and strikes.

Iran's president, Hassan Rouhani, who signed the nuclear deal in 2015, has been under pressure at home from ultra-conservatives, who denounced his willingness to talk to the West and blamed him for the country's ailing economy.

The Iranian president spoke to European leaders this week in support of saving the deal. But Rouhani told French President Emmanuel Macron that the current economic measures offered by Europe did not meet all of Tehran's demands to salvage the nuclear deal, Iran's IRNA state news agency reported.

Prior to heading to Vienna, French Foreign Minister Jean-Yves Le Drian told RTL radio that he thinks it unlikely that European powers would be able to put together a successful economic package to save the deal before November and asked Tehran to be more cooperative.

"They must stop the threats so that we can find the solutions so that Iran can have the necessary economic compensations,"Le Drian said.

Le Drian noted that Russia and China were working closely with the European signatories to find a suitable financial solution to US sanctions.

Germany's foreign minister, Heiko Maas lowered Iranian expectations prior to the Vienna meeting, saying that the five signatories would not be able to mitigate all the problems created by sanctions, but said that abandoning the deal would cause Tehran more harm to its economy.

"We want to make it clear to Iran today that it will continue to  benefit economically from this agreement," Maas told reporters.

Hassan Rouhani has met with Austrian Chancellor Kurz and President Van der Bellen in a bid to save the Iran nuclear deal. But his trip has been overshadowed by an alleged bomb plot against critics of Iran's regime. (04.07.2018)

Iran is set to start producing new centrifuges for enriching uranium at its Natanz facility in a month's time. It said the move was not in violation of the 2015 nuclear deal European powers have been trying to salvage. (07.06.2018)