Iranian ayatollah Shahroudi in Hanover - ′Germany should not be a haven for criminals′ | Asia| An in-depth look at news from across the continent | DW | 11.01.2018

Ayatollah Mahmud Hashemi Shahroudi was responsible for overseeing hundreds of death sentences as head of Iran's justice ministry. Many in Germany were outraged by his stay in the country and filed complaints against him. 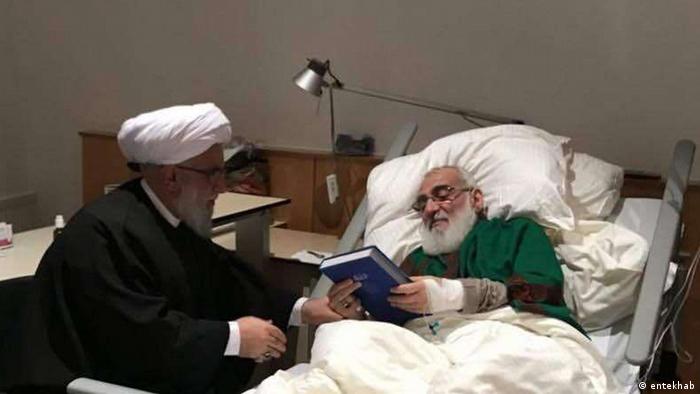 Police in the northern German city of Hanover told the newspaper Neue Presse that Iranian Ayatollah Mahmud Hashemi Shahroudi has left the city. The Iranian cleric was receiving medical treatment for a reported brain tumor at a private hospital in the city.

The office of Germany's federal prosecutor says it is continuing to investigate whether to bring charges against Shahroudi.

A spokesman for the prosecutor's office said authorities "will continue to examine on a legal basis whether [Ayatollah Mahmud Hashemi] Shahroudi was guilty of crimes against humanity" during his decade overseeing an estimated 2,000 executions as the head of Iran's justice ministry, regardless of whether he leaves or stays in the country.

According to the Iranian opposition movement, the National Council of Resistance of Iran (NCRI), Shahroudi, together with his six-member entourage, wanted to fly back to Tehran on Thursday.

In a DW interview, German politician Volker Beck talks about the complaint he filed against the Iranian cleric. 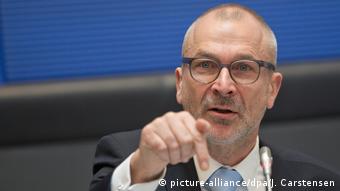 Beck: 'I wonder how a man like Shahroudi could even get a German visa'

DW: You have filed a complaint against Ayatollah Mahmud Hashemi Shahroudi , stating that the top Iranian cleric was guilty of murder and crimes against humanity. What led you to take this action?

Volker Beck: I have read press reports about him. I know that he is responsible for overseeing scores of death sentences when he led Iran's justice ministry. (Editor's note: Shahroudi served as head of Iran's justice ministry from 1999 to 2009. During this period, an estimated 2,000 Iranian prisoners, including many minors, were executed.)

This should not be left unpunished. Germany should not be a haven for criminals. That's why I filed a complaint against him with the office of Germany's federal prosecutor. I also wonder how a man like Shahroudi could even get a German visa.

Is Shahroudi  the only politician from an authoritarian country who came to Germany to receive medical treatment here?

No, unfortunately not. I spent many years in the human rights committee of the German Bundestag and we have repeatedly argued with the government, and also with the Office of the Public Prosecutor General, about the application of the penal code to cases involving crimes against humanity. Such cases have to be investigated. And people who commit such crimes need to know that there are no safe havens for them in this world.

What is the probability that Ayatollah Shahroudi will be held accountable in Germany?

I do not know about his current status and whether the federal government had promised him immunity or not. If so, that would be legally flawed, as he is not a member of the Iranian government, but rather only an official and travelled in his private capacity. I cannot weigh in on that issue.

Many critics in Iran accuse Germany of only being interested in economic cooperation with Iran and less of looking at the situation of human rights. What is your take on this?

I was in Iran once, in 2006. I then met many people, spoke to members of parliament and to members of various religious communities as well as Islamic foundations. I spoke to them about human rights. I formed my own impressions. As part of my work in the human rights committee, I have always followed closely developments in Iran.

Iran is simply one of the countries that - unlike Saudi Arabia - has signed the human rights charter of the United Nations, which is positive in the first place. But on the other hand, Iran is also a country that does not comply, for example, with the use of the death penalty. For instance, the country imposes the death penalty on minors.

In any case, the pact only allows the death penalty for the most serious crimes and not for homosexuality or "offenses" that are not punishable in most countries of the world.

Germany should make it clear that, on the one hand, we are meeting our contractual obligations toward Iran in connection with the nuclear deal, if Tehran adheres to the treaty. But on the other hand, we must make it clear that we are not looking the other way when it concerns issues such as the suppression of Iranian civil society, the lack of religious freedom, the persecution of women who do not want to live or act as the the ayatollahs wish.

And I would like to ask the German government for more clarity here. I understand that we have to cooperate with foreign nations, even if we reject their form of government and rule. That's how foreign policy is made. But still, one can take a clear position.

I also have the impression that more priority has been assigned to economic relations and other issues. And I think that's a mistake; it's a mistake with Iran and it's a mistake in the case of Saudi Arabia.

Volker Beck is a German politician. From 1994 to 2017, he was a member of the German parliament, for the Green Party.

The interview has been condensed and edited for clarity.