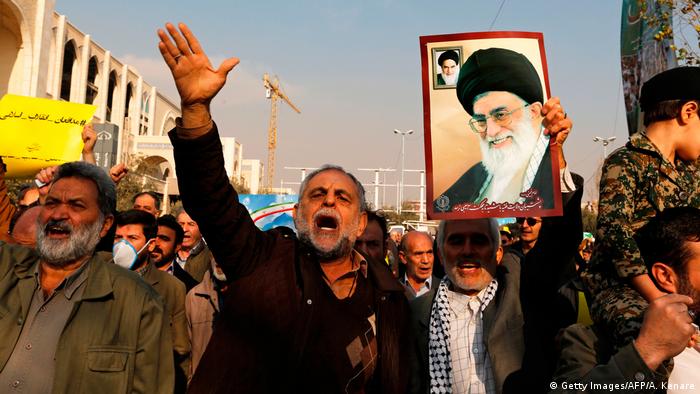 Government supporters took to the streets of Tehran after Friday prayers in a rebuttal to five days of anti-government protests that have left at least 21 people dead and seen hundreds more arrested.

Hardline cleric Ahmad Khatami told his followers that anti-government protesters were enemies of Islam, and called for harsh retribution.

"There should be no mercy for them," he said during the prayer service in Tehran's Imam Khomeini Mosalla Mosque.

This is the third day that pro-government rallies have been visible.

- Iran protests: EU urges restraint, US and Israel up pressure

Iranian officials blamed the recent unrest on a plot by the CIA, Israel and Saudi Arabia, as tensions between Iran and its neighbors deepen since President Donald Trump's arrival in the White House.

"They launched (social media) campaigns with the theme of 'no to high prices', 'no to paying bills'," he said, adding that the plan was to start unrest in the provinces before moving on to Tehran.

The US responded to the recent unrest by calling for an emergency meeting of the UN Security Council (UNSC) and by slapping new sanctions on five Iranian companies Washington claims have been working on an illegal ballistic missile program.

"These sanctions target key entities involved in Iran's ballistic missile program, which the Iranian regime prioritizes over the economic well-being of the Iranian people," US Treasury Secretary Steven Mnuchin said.

President Donald Trump praised the Iranian people, saying he had a great deal of "respect" for them, and encouraged them to continue their protests. Iranian President Hassan Rouhani mocked Trump's comments on Twitter.

There were no reports of anti-government protests in Tehran overnight as a heavy police presence has, for now at least, quelled public displays of discontent.

There were reports of small anti-government protests in the provinces, but these could not be immediately confirmed.

Police appealed to the public to help them clamp down on anti-government protesters, asking them to send photos and videos of "trouble-makers," and to help them identify suspects already caught on camera.

In addition to the deaths, hundreds of people have been arrested.

President Hassan Rouhani's supporters have accused their conservative rivals of provoking anger over economic issues, which quickly grew out of control and resulted in attacks against security forces, government buildings and symbols of the government.

Conservatives reject the accusation and claim President Rouhani, a moderate, should do more to help the poor. Parliament is already seeking to overturn an unpopular fuel tax that was tucked into the president's recent budget.

The UNSC is due to hold an emergency meeting on the issue later on Friday, but it's unclear if the meeting will go forward or be blocked by a procedural vote from other council members. Moscow has criticized Washington's call for the meeting.

Are pro-government demonstrations a sign of a changing tide in Iran? – Q&A with Iran expert Paulo Casaca