Protests have been taking place in dozens of cities across Iran, a day after demonstrations turned deadly. Authorities warned they would crack down on any violence and challenges to the government.

Rouhani: 'Criticizing and protesting should be done constructively'

Some 200 people were arrested during Saturday night's protests in the Iranian capital, the semi-official ILNA news agency reported, citing an official in Tehran on Sunday.

"These individuals are now with the judiciary and some others have been freed out of clemency," Ali Asghar Nasserbakht, a security deputy for Tehran's governor, said.

Several hundred people gathered in Tehran and the western city of Khorramabad on Sunday evening in the fourth day of demonstrations.

Another semi-official news agency later quoted a government official saying two protesters had been killed at a rally overnight. The Mehr news agency reported Sunday that the two protesters were killed in Doroud, in Iran's Lorestan province.

"Criticism is different to violence and destroying public property," he said in a cabinet meeting, according to the state broadcaster.

"Government bodies should provide space for legal criticism and protest," he said in his first public comments since the protests began on Thursday.

Rouhani added that US President Donald Trump had "no right" to sympathise with Iranian protesters who he has previously called terrorists. "This man who today in America wants to sympathise with our people has forgotten that a few months ago he called the nation of Iran terrorist," Rouhani said. "This person whose whole being is against the nation of Iran has no right to feel pity for the people of Iran."

The United States has led international criticism of the Iranian regime and promoted the protests.

US President Donald Trump tweeted: "The people are finally getting wise as to how their money and wealth is being stolen and squandered on terrorism."

Trump tweeted Sunday that it looks like the Iranians "will not take it any longer." And he adds: "The USA is watching very closely for human rights violations!"

Some Iran observers have said that US support of protests is likely to be counterproductive, as it provides the regime ammunition to level claims that they are backed by foreign powers.

Iranian citizens are among those banned from the United States under Trump's recent immigration orders.

Trump has also threatened to pull the United States out of the nuclear deal and impose sanctions that would add to economic suffering for average Iranians.

Tehran warns of a crackdown

Iran earlier on Sunday warned that authorities would crack down on any unlawful protests, as the country prepared for a fourth day of unrest over economic woes that have shaken the political establishment.

The demonstrations, which began on Thursday, appear to be the largest since the Green Movement protests in the wake of the disputed 2009 presidential election.

Anti-government protesters demonstrated on Sunday in defiance of the warnings. Police in the center of Tehran fired water cannon to disperse demonstrators.

Media coverage of the protests from inside the country is limited and restricted, adding to uncertainty about the nature and scale of the demonstrations.

Videos shared on social media on Saturday night and Sunday morning showed thousands of protesters taking to the streets in dozens of cities and towns across the country.

Many protesters shouted "Death to the dictator," in reference to Supreme Leader Ayatollah Ali Khamenei, as well as denouncing President Hassan Rouhani.

Other slogans criticized Iran's financial and military support of Syria, the Lebanese Shiite group Hezbollah and Palestinian Hamas movement at the expense of taking care of Iranians at home.

At least two people were shot and killed on Saturday in the western town of Dorud, in Lorestan province, authorities confirmed.

"The gathering was to be ended peacefully, but due to the presence of the [agitators], unfortunately, this happened," Mehr news agency quoted Habibollah Khojastepour as saying.

'Law-breakers must pay the price'

Semi-official conservative media outlets confirmed videos shown on social media of an evening attack on a town hall in Tehran, as well as others that showed protesters attacking banks and municipal buildings in other parts of the country.

"Those who damage public property, disrupt order and break the law must be responsible for their behavior and pay the price," Interior Minister Abdolrahman Rahmani Fazli said on state television early on Sunday. "The spreading of violence, fear and terror will definitely be confronted," he added. 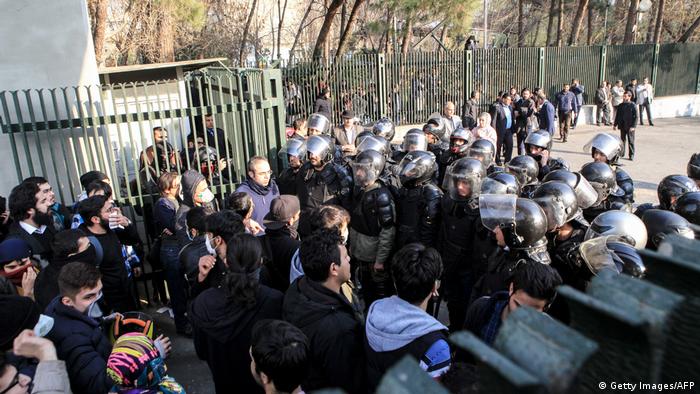 Students faced off with police at Tehran University on Saturday

DW could not independently verify all of the videos being posted on the social media app Telegram, which is being used by Iranians inside the country to share information about the protests.

Many videos showed peaceful protests, including some calling on police to join them.

A message on a Telegram group called for continued protests on Sunday in more than 50 cities and towns.

The government has accused Telegram groups of fomenting violence and being run from abroad.

Telegram CEO Pavel Durov confirmed Iranian authorities blocked the app after it refused to shut down some Telegram channels.

Telegram on Saturday removed Amadnews, one of largest opposition channels, at the request of the Iranian government after it violated no violence rules by instructing subscribers to use Molotov cocktails against police, Durov said.

Internet and mobile users may be able to get around the government block using proxy servers.

There have been minor protests in several towns over the past year, driven largely by people who lost their money when banks and credit institutions collapsed.

But the latest ballooning mass protests appeared to come out of nowhere on Thursday in Mashhad, Iran's second largest city and an important Shiite pilgrimage site located the country's northeast. 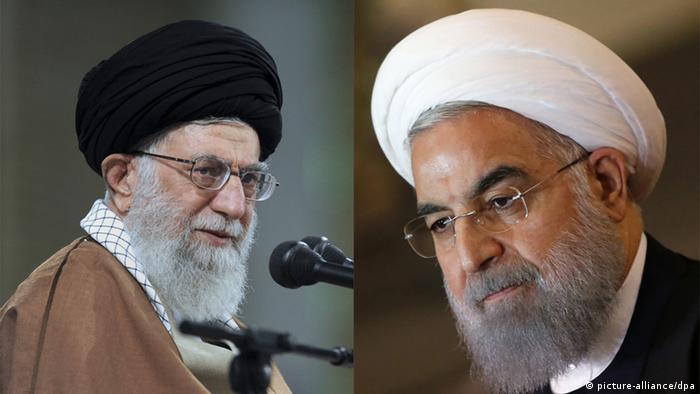 Khamenei and Rouhani have both been criticized by protesters

The protests then spread to dozens of towns and cities, including in Rasht in the north, earthquake-stricken Kermanshah, Qazvin to the west of Tehran as well as in Hamadan in western Iran. Anti-regime protests were even reported in Qom, the center of the clerical establishment.

Iranian analysts have suggested hardliners may have organized protests in Mashhad against Rouhani that have gotten out of control and spread to other towns.

Vice President Eshaq Jahangiri, a close Rouhani ally, also suggested the anti-government protests were organized by hardliners within the regime.

What makes the protests unprecedented is their scale and geographic scope, taking place not only in Tehran but also in provincial areas.

They also appear to be driven in large part by poorer sections of society, angry about high unemployment, soaring prices and financial scandals.

The protests also appear to be leaderless, unlike the 2009 Green Movement led by former prime minister Mir Hossein Mousavi and former speaker of parliament Mehdi Karroubi.  Both are still under house arrest.

The disparate nature of the protests also makes it unclear what the protesters actually demand, and complicate a government response to address citizen concerns.

"As of yet, it is not clear whether we can speak of one protest movement or several protest movements, as there are different (and sometimes conflicting) grievances and solutions being articulated," Eskandar Sadeghi-Boroujerdi, an Iran historian at Oxford University, wrote in Jadaliyya.

Renewed anti-government sentiment could present a challenge to Rouhani, a moderate who was re-elected earlier this year after presiding over a 2015 deal with world powers to curb Iran's nuclear program in return for the lifting of sanctions.

However, the sanctions relief and Rouhani's economic and social policies have failed to meet many Iranians' expectations despite renewed economic growth. Unemployment is high, especially among youth, and socioeconomic inequality has increased.

Corruption is rampant and hardliners maintain control over vast swaths of the economy. In addition to structural issues in the economy, secondary US sanctions on Iran have impacted the post-nuclear deal gains for Iran.

'A right to be heard'

Some observers have speculated that the Islamic Revolutionary Guard Corps and its Basij militia, which are tied to the Supreme Leader, are waiting to clamp down on protests because they want to weaken their rival Rouhani.

Hardline Iranian authorities have blamed "counter-revolutionaries," foreign powers and foreign-based opposition groups like the People's Mujahedin of Iran (MEK) for the unrest. 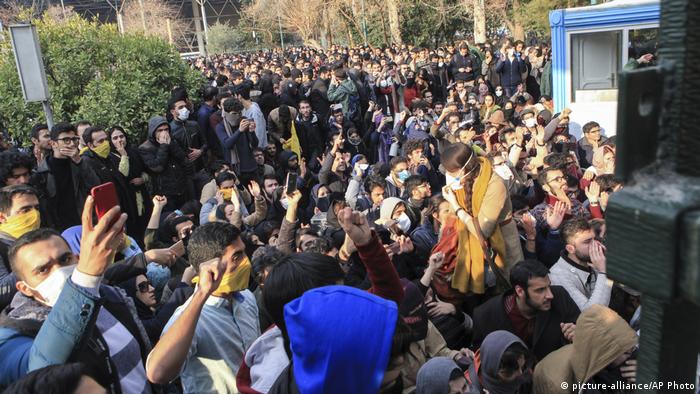 Students at Tehran University chanted against the government

"The enemy wants once again to create a new plot and use social media and economic issues to foment a new sedition," Ayatollah Mohsen Araki told a crowd in Tehran, according to the conservative Fars news agency.

"Although people have a right to protest, protesters must know how they are being directed," Massoumeh Ebtekar, vice president in charge of women's affairs, wrote on Twitter.

"People have the right for their voice to be heard."

EU businesses are striving to expand trade with Iran. But US policy has added uncertainty to the already complicated but potentially robust economic relationship between the European Union and Iran. (04.10.2017)

The EU's top diplomat says the US can't terminate the Iran nuclear agreement because it's not a "bilateral deal." European leaders acknowledge Iran poses many problems, but insist they should be handled separately. (14.10.2017)

Rouhani: 'Criticizing and protesting should be done constructively'