A woman in Lucknow has been attacked with acid for the fourth time since 2011, Indian media reported. Violence against women very often goes unpunished in India, with several gang rape cases causing nationwide uproar. 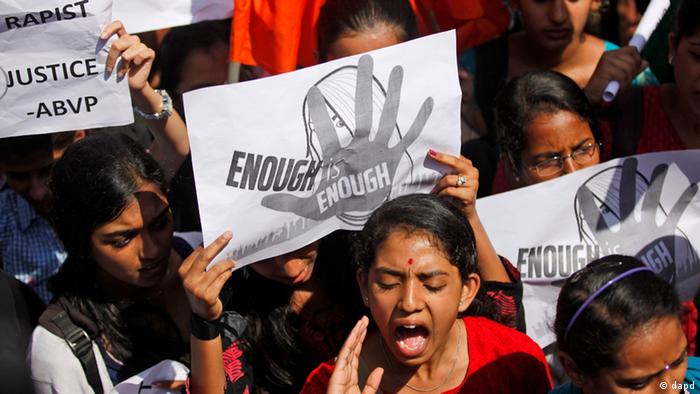 Indian police and media said Sunday that a 35-year-old woman was raped Saturday night outside her hostel in Lucknow, a northern Indian city in Uttar Pradesh state.

"She is in hospital; she can't talk yet. She has injuries on her face. We are investigating the case," police officer Abhay Kumar Prasad said.

"She was outside her hostel when someone came and threw acid on her…," Prasad added.

The woman, whose name was not disclosed by authorities, works at a cafe managed by acid attack survivors, India's NDTV reported.

NDTV also said the same woman was allegedly gang-raped in her village in 2008 and the woman's family suspected she was being targeted by people close to the gang-rape accused.

Indian media said the woman was attacked with acid for the first time in 2011, then in 2013 and again in March this year.

"This is a total failure of law and order," Juhie Singh, a leader of the province's opposition Samajwadi Party said.

"She was in a safe and secure place. Investigations are on. This could be an attempt to malign the government," Adityanath said during an interview to India Today television channel.

According to the Kolkata-based nonprofit Acid Survivors Foundation India, 100 to 500 women are attacked with acid annually in India. Reasons for these attacks range from revenge for spurned marriage proposals or sex, domestic disputes, dowry demands and suspicions of infidelity, according to the foundation.

Acid attacks on women are also widespread in other South Asian countries, including Bangladesh and Pakistan.

'I am Monica Singh' - Why giving up is never an option

In the past few years, an alarming number of rape cases have been reported across India. The incidents seem to be getting uglier and more frighteningly brutal as the country asks what measures can be taken to better protect women and girls.

In May, a 23-year-old woman in the northern state of Haryana was gang-raped by seven men, killed and smashed in the face with stones to conceal her identity. Her mangled body was reportedly found with stray dogs picking at the remains.

A few days later, a 22-year old woman from the northeastern state of Sikkim reported being gang-raped in the Delhi suburb of Gurugram by three men in a moving car.

Both of these horrific crimes come shortly after India's Supreme Court upheld the death sentences of four men convicted of brutally raping and killing a medical student in Delhi in 2012. The incident grabbed international headlines and put a spotlight on the dire state of women's rights in India.

Activists say rape is a social problem in India that is shrouded in shame and stigma in a country governed by conventional patriarchy. They are calling for whole-scale systemic changes.

"We make the mistake of focusing on gory and graphic details of such crimes," Kavita Krishnan, secretary of the All India Progressive Women's Association, told DW. "We need to look at a complete overhaul in terms of policing - more accountability from prosecuting agencies and more judges," she added.

Krishnan, who was at the forefront of protests during the 2012 medical student's death, also called for a more open "culture of conversation relating to consensual sex and autonomy for women."

The National Commission for Women (NCW), whose mandate is also to ensure that investigations by the police are expedited and monitored, believes there is now more reporting of sexual violence - which has led to increased media coverage.

"Filing of a first information report has now become mandatory for the police, and that is why more and more women are coming out," Rekha Sharma, a NCW member told DW. "But what we also need urgently is a fast-track judicial system and a more proactive police," she said.

More women joining the workforce in cities is cited by some as a reason behind the huge spike in rape incidents in urban areas. In rural areas, the rising trend can be attributed to a pervasive caste system where the girls usually belong to a lower caste than the rapists.

Regardless of the social causes, activists are shocked by the brutality and the kind of violence that is inflicted on women regularly.

Why acid attacks are on the rise in India

Despite stricter laws and punishments, the number of acid attacks in India continues to increase. DW examines the reasons behind it and the measures needed to prevent acid violence in the South Asian nation. (08.06.2016)