Eight men are being investigated after the gang-rape and brutal murder of a woman in India's northern state of Haryana. The 23-year-old victim's body was dumped in an industrial area following the attack. 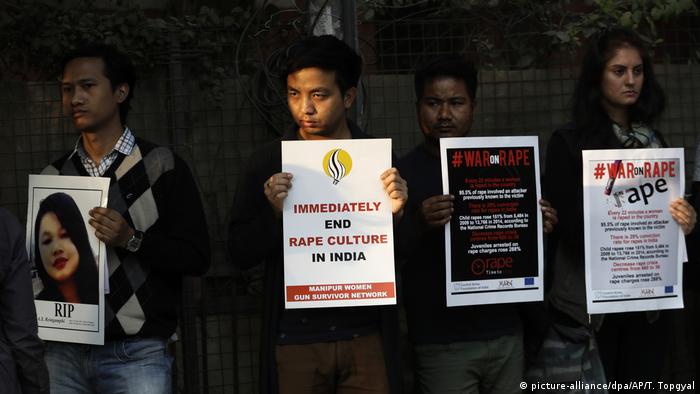 Protest against 2012 rape and murder in New Delhi

The woman was abducted from her home near the city of Sonipat by her ex-boyfriend and a friend who then allegedly gang-raped and mutilated her, investigators in India's Haryana state said on Monday.

She was taken by car to the nearby city of Rohtak, about 66 kilometers (41 miles) northeast of the capital Delhi, where the attack took place.

Police superintendent Ashwin Shenvi told the Reuters news agency that the 23-year-old woman's skull was smashed with bricks after she had threatened to inform police about the attack.

"When she said to them she would complain, they hammered her skull in with bricks," he said. "The way that they brutalized her is horrific."

A teenage girl who had been raped and set on fire in her home village has succumbed to her injuries. The horrific case follows a disturbing pattern of violence against women in India. (09.03.2016)

After the fatal gang rape in New Delhi last December, a juvenile court has delivered a guilty verdict on one of the suspects on trial. Rights activist Ranjana Kumari examines how the case has affected Indian society. (31.08.2013)

Two Indian girls found hung from a tree in May "committed suicide" and were not gang-raped and murdered, federal investigators have concluded. Authorities said their motive was "shame over a relationship with a boy." (27.11.2014)

The victim's body was then dumped in an isolated industrial area, where it was discovered four days later.

Opposition leader Sonia Gandhi described the rape and murder as "savage and bone-chilling," adding that it had "shocked the conscience of the nation."

The crime also sparked outrage from women's rights groups, who have demanded justice for the victim.

Two men have been arrested, while six others were being investigated after the victim's mother accused them of involvement, Shenvi said.

The mother had previously registered a complaint against one of the accused for pressuring her daughter into marrying him, but the disagreement was settled between the two parties, the police officer added.

Another police spokesman, Jagjeet Singh, told AFP that the victim's post-mortem report showed she had been drugged or sedated during the horrific attack.

"The main accused, Sumit, and she (the victim) were in a relationship but she didn't want to marry him and he lost it. He wanted revenge," Singh said.

Public broadcaster All India Radio tweeted late on Monday that Haryana state Chief Minister Maonhar Lal has called for a fast-track trial to bring the alleged perpetrators to justice.

India has a shocking record on rape, with nearly 40,000 cases reported every year, although the real number is thought to be much higher.

In 2012, the horrific, fatal gang-rape of a student on a bus in New Delhi  sparked nationwide protests about entrenched violence against women and the failure of authorities to protect them.