Why acid attacks are on the rise in India

Despite stricter laws and punishments, the number of acid attacks in India continues to increase. DW examines the reasons behind it and the measures needed to prevent acid violence in the South Asian nation. 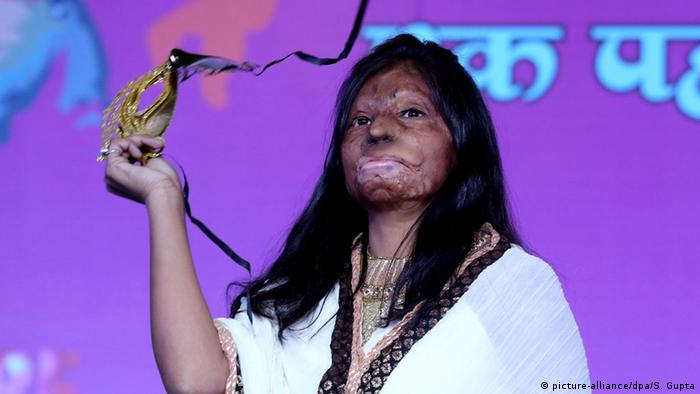 Pragya Prasun was on her way from the Hindu holy city of Varanasi to the capital New Delhi days after her wedding, when a distant male relative poured acid on her.

"I initially didn't realize what was happening. My skin was burning, fumes were coming off it, and it smelled as though a tire was burning on my body," recalls Prashun, who was only 22-years old at that time.

The relative attacked her with acid because she had rejected his marriage proposal.

Ten years have passed since the assault, which burned 47 percent of her body.

Still, Prasun remains thankful to a doctor who was traveling in the same train as her on the night of the attack. The doctor, she says, saved her life that night.

"She instantly recognized it as acid and requested everyone in the train to put as much as water as possible on me so that the acid gets washed off,'' Prasun told DW, adding: "she gave me her scarf to cover my body as my clothes were burned along with my skin.''

Prasun knows the pain that every acid victim goes through in India, where receiving proper medical treatment remains a huge challenge for the victims.

''There are very limited specialized burn hospitals in India and these hospitals are always flooded with burn patients. For that reason, getting admitted to an affordable government hospital is almost impossible for an acid victim,'' Prasun said, pointing out that ''the wounds take nearly four to five months to get healed.''

Statistics show a clear increase in the number of acid attacks in the South Asian country in recent years. At least 106 such attacks were reported in 2012, according to the Acid Survivors Foundation India (ASFI). And that figure rose to 122 in 2013 and 349 in 2014. Activists say that figure climbed to over 500 in 2015.

However, Prasun disputes the figure, arguing that many cases remain unreported. She estimates that around 1,000 acid attacks take place in India every year.

Attack on body and soul: How do women survive acid attacks?

Five years ago, Nusrat lost her face, her courage and her old life when her husband spilled acid over her. All that remains is endless pain. But the incident has also led to a newly found freedom. (28.07.2014)

India's top court has ruled authorities should regulate the sale of acid, which is often used in attacks on women. But that's not enough, says Suneet Shukla, a campaigner with Stop Acid Attacks. Society needs to change. (01.08.2013)

"There are many unreported cases of acid attacks where victims die, especially in rural areas. Sometimes people try to hide information if the attacker was the husband or a family member of the victim,'' said Prasun, who runs Atijeevan Foundation, an organization that rehabilitates acid attack survivors in the southern city of Bangalore.

The majority of acid attack victims are women, reveals a report commissioned by the Acid Survivors Trust International (ASTI) and published last year.

The victims are attacked over domestic or land disputes, a rejected marriage proposal or spurned sexual advances, according to the report.

Alok Dixit, the founder of the Stop Acid Attacks (SAA) campaign based in New Delhi, agrees with the report's findings over the reasons for these attacks. He has established a cafe in the northern city of Agra that is run by acid attack survivors.

"We created a network of acid attack survivors in India. Our aim is to make them leaders. It's not like we represent them, it's more like they themselves take care of their cause and fight for their rights,'' Dixit told DW.

As the cafe in Agra has created a positive impact on the survivors, he opened another cafe in Lucknow recently, and planning to set up two more cafes - one in Udaipur and another in New Delhi - soon. Acid attack survivors will run those new cafes as well, he confirms.

The SAA campaign has been using social media to raise awareness of acid violence since 2013. The campaign was given DW's "The Bobs - Best of Online Activism'' award this year.

"We focus more on social change because we believe only laws can't stop these crimes. Because these offenses are passion crimes and most of the times family members or colleagues or friends of the victims are involved. It happens out of passion. We need to stop that via social awareness,'' Dixit stressed.

His online campaign has grabbed huge attention in India. He collects donations via crowdfunding and his latest request for funding for the surgery of an acid victim met the target immediately after it was posted online.

"People started talking about acid violence in 2013, and very soon we got better laws, better rules and there are better facilities for survivors,'' said Dixit. "But even though change is happening in society, it will take a long time to notice it in as big a country as India."

But Megha Mishra, a spokesperson for the ASFI, says the Indian government needs to do much more to end acid attacks in the country.

"The very first thing the government has to do is to ban the sale of acid in the retail market. Second, it has to get very serious about punishing the perpetrators. Third, it has to ensure proper medical treatment for the survivors as they still need to fight to get medical support,'' Mishra told DW.

In 2013, the Supreme Court of India ordered the government to limit over-the-counter acid sales to people over 18. But Prasun criticizes the authorities, arguing that they have failed to implement the rules governing the sale of acid in the country.

This, in turn, has resulted in acid continuing to remain available everywhere at a very low price, she said. "I demand a complete ban on acid. It is not a commodity which should be available in the retail market. Acid only harms and it has destroyed so many lives in our country."

The UN is warning Myanmar's 'horrible cycle of violence' could escalate. But how bad could it get? And after a nearly three year wait, Hong Kong eases COVID curbs for international travellers arriving in the city.