Apps that alert friends and report crime to authorities are increasingly popular in one of the world's most dangerous regions for women. However, the digital divide means fewer options for those without smartphones. More than 2,300 women were killed in Latin America in 2018, according to the UN Economic Commission for Latin America and the Caribbean (CEPAL) — and UN Women says that of the 25 countries with the highest rates of femicide, 14 are in Latin America.

Although many Latin American countries have in recent years passed laws that punish gender-based violence and harassment on the streets or in the workplace, the UN reports the region is one of the most dangerous for women worldwide. El Salvador has the highest femicide rate in the world with 6.8 per 100,000 inhabitants, followed by Honduras with 5.1.

Read more: Femicide in Mexico on the rise and growing even more brutal

"A study by the Argentine Ahora que si nos ven NGO for women's rights states that 90% of women in public transport or taxis use their smart phones to stay in touch with acquaintances," Damaris Ruiz, a women's rights coordinator at Oxfam's Latin American section, told DW.

While combating the widespread violence is a complex task that requires a range of societal initiatives, mobile technology may in certain circumstances provide assistance to women. "In Latin America and the Caribbean, a large number of apps for women have emerged, and they are widespread," Ruiz said, adding that even some governments were involved in their development following feminist organizations' demands for a solution to violence perpetrated by men.

In multiple Latin American countries there are free apps available featuring a panic button that sends a call for help to selected contacts or other users nearby. The app transmits the phone's geodata information, which allows the recipients of the emergency call to find the user's location.

Apps featuring this tool include We Help (Mexico), Boton de Panico Ni una menos (Argentina), #NiUnaMenos (Peru) and Antonia (Chile). A similar app that goes by the name of No estoy sola developed by the Women's Rights Office for the Mexican city of Juarez activates an alarm when the phone is shaken. "Often, there is no time to write a message," Ruiz said.

Another Mexican app, Mujer Segura Alerta Rosa, found an even simpler way to call for help: The women wear a bracelet with a panic button that sends a signal to a police station. This form of emergency call, however, requires a degree of confidence in local police — which is by no means a given in all countries in Latin America. In Mexico, for example, several recent cases of reported rape and assault by male police on women led to widespread outrage, protests, and calls for justice.

Read more: #MeToo Cuba: Will the movement spread to the island?

Some apps such as Junt@s (Peru), Ellas App (Colombia), Mujer Alerta (Mexico) and SofiApp (Colombia) provide even more assistance, including the option to confidentially file a complaint, as well as information on gender-based violence and access to legal and psychological advice.

"These apps not only serve to share the current location and send a message in the event of a threat, but also find ways to close the gap in reporting and judicial action," Ruiz said.

Women in Mexico City use the Vive Segura app to report harassment on public transport or in public places directly to the police. The SafetiPin app that originated in India is similar but also allows users to mark neighborhoods and streets on a map as safe or unsafe. SafetiPin is also available in Kenya and in Bogota, Colombia. 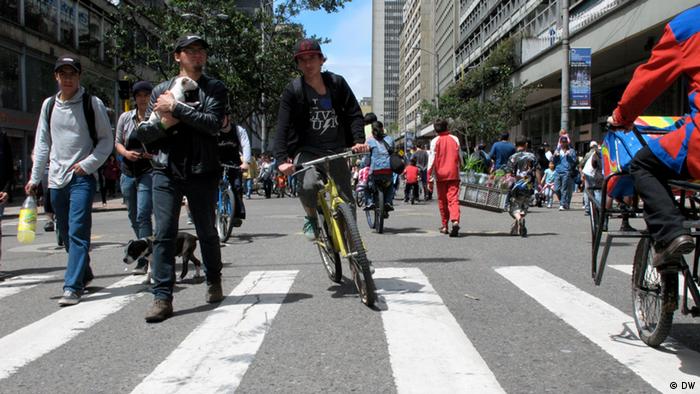 In Bogota, the SafetiPin app helps identify nearby safe streets and neighborhoods

"We've found that when it comes to violence against women there are certain variables of enormous significance, such as an absence of security forces in dark places and that, in Bogota, it's mostly men who go out at night — nine out of 10 people are men," said Carlota Almeciga, a former head of the Knowledge Management Department in the Bogota city council. Almeciga's statement reflects a startling reality: in many urban centers across Latin America, police lack sufficient resources due to mismanagement, widespread corruption and financial shortages.

With the help of Germany's GIZ agency for international cooperation, the SafetiPin app now covers the city's entire urban area. "The maps are available to the public and allow women to choose safe routes in their environment," said Almeciga.

Mexico's Laudrive app and Sara Ladies & Teens in Argentina offer an Uber-like rideshare service for female passengers, with women drivers. "This service offers safety, comfort and peace of mind for both sides: Even before the journey, both the driver and the customer know with whom they will be traveling," Felipe Martínez, head of Sara LT, told DW. The transportation service is scheduled to start soon in Colombia and Central America, followed by Peru and Uruguay. It is much needed, too, according to a study by the Argentinian NGO Ahora que si nos ven, which has found 14% of women sometimes feel harassed by male drivers.

Women who don't carry a smartphone have limited options, said Oxfam's Ruiz, who points out that the digital divide in many Latin American countries is still very large. In that case, women resort to simple strategies — never travel alone, memorize the taxi's license plate number and always talk to a friend on the phone while driving. Useful measures perhaps, but activists underline that what really needs to change is not women's behavior. Instead, it is the widespread attitudes that lead some men to commit violence.

Mexican marines to be investigated for torture, rape

Four servicemen will face an inquiry after a Mexican human rights commission accused them of abusing suspects linked to drug gangs. The marines allegedly assaulted six female detainees in the state of Veracruz. (05.02.2016)