A recent string of alleged police attacks on women and girls has led thousands of women to take to the streets in the Mexican capital. Women are demanding better security and an end to violence. 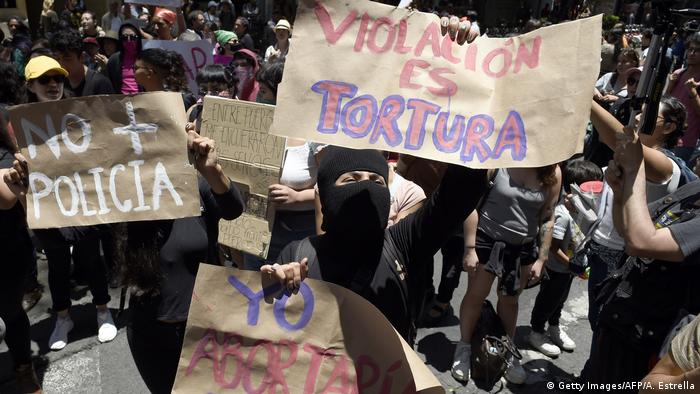 Some two thousand marchers, nearly all women, have protested in Mexico City after a series of allegations of police officers raping and sexually abusing women.

Earlier this week, an auxiliary policeman was detained for trial on charges he raped a young female employee at a city museum.

In another case, a 17-year-old girl said four policemen raped her on August 3 in their patrol car as she left a party in the municipality of Azcapotzalco, north of the capital.

The case has raised a wave of outrage after the city attorney, Ernestina Godoy, admitted last week that the officers have not been charged because officials are waiting for the victim to identify the perpetrators.

In yet another case, just six days later, a 16-year-old girl said a policeman raped her at the photographic archives in the city center. The policeman was arrested last week.

The protesters gathered in the center of the country's capital on Friday with pink spray paint and smoke. The protesters have become known as the "glitter protests" after demonstrators covered the city's chief police in pink glitter earlier this week.

Protesters chanted slogans including "Rapist police!", "I believe you!" and "My friends protect me, you don't!"

They also called for better security for women in public and for leaders to denounce violence against women.

Read more: Violence against women is a universal problem

While the protests began peacefully, the tenor later changed as some protesters engaged in defacement of public property.

Some protesters smashed the windows of a police station and set a fire on the second floor.

A crowd then went to the nearby Independence Monument, the symbolic center of the city, and spray painted the base of the stone monument. Others trashed a bus station.

She appealed to the protesters to continue engaging in meaningful dialogue.

Mexico: Couple claim to have killed up to 20 women

A couple in Mexico may have killed up to 20 people, often luring their victims with offers of cheap baby clothes. They have also reportedly confessed to selling one of the dead women's 2-month-old baby to another couple. (09.10.2018)