Protesters in Mexico City have demanded justice after two teenage girls reported being raped by police officers in separate events in the capital. In one case, four policemen still haven't been arrested. 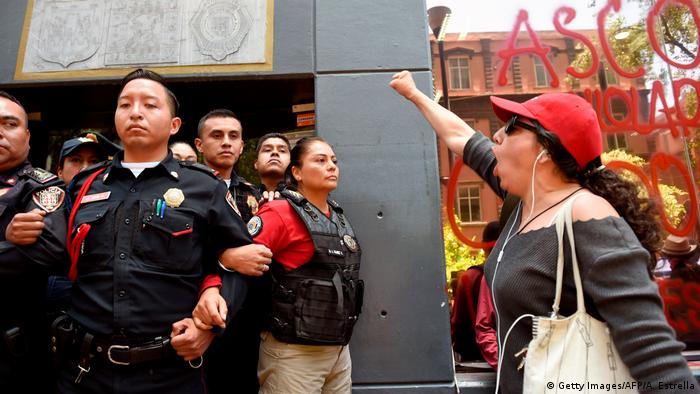 About 300 protesters in Mexico City have demanded justice for two teenage girls who reported being raped by police officers in the capital.

Shouting "Justice" and "They don't protect us: They violate us," the mostly women protesters descended on the city's security headquarters and local prosecutor's office on Monday.

The crowd turned unruly, covering the capital's security minister, Jesus Orta, with pink glitter and spray-painting police. Protesters also displayed a pig head outside the prosecutor's office and shattered glass on the building.

Orta urged the protesters to remain calm and vowed an investigation and punishment for any officer "if he has committed a crime of a sexual nature," while guaranteeing that police would ensure the protection of "women and all citizens."

The women are enraged about two recent reports of sexual assault by police.

In one case, a 17-year-old girl said four policemen raped her on August 3 in their patrol car as she left a party in the municipality of Azcapotzalco, north of the capital. The case has raised a wave of outrage after the city attorney, Ernestina Godoy, admitted last week that the officers have not been charged because officials are waiting for the victim to identify the perpetrators.

In the other case, just six days later, a 16-year-old girl said a policeman raped her at the photographic archives in the city center. The policeman was arrested on Thursday.

Mayor Claudia Sheinbaum — the capital's first elected female mayor — said at a press conference that authorities would carry out justice, but called the protesters provocateurs.

"We are not going to fall for any provocation, this was a provocation. They wanted the government to use violent methods and in no way will we fall for it. There will be an investigation and the prosecutors' office will resolve it," Sheinbaum said.

She also said that "due to the seriousness of the case" the Human Rights Commission of Mexico City would be involved in the investigation.

Godoy said on Twitter that her office had opened "several investigations" to examine the facts of the cases.

Mexico has recorded high levels of violence against women. According to the United Nations, an estimated nine women are killed every day in the country.

According to the Mexican Institute of Statistics and Geography, 44% of women have suffered violence from a partner and 66% of women have experienced some form of violence during their life.

Two reporters were gunned down, while a third was found dead in the trunk of a car. Mexico is one of the most dangerous places in the world for journalists, with a majority of the murder cases going unsolved. (03.08.2019)

Multiple incidents of ghastly sexual violence in recent months have raised serious concerns over the safety of women and children in Bangladesh. Experts blame "a culture of impunity" for the spike in sex crimes. (10.07.2019)

A German court sentenced 22-year-old Iraqi national Ali B. to life in prison for raping and killing a 14-year-old girl in Mainz. The man had admitted to murder but insisted that he and the girl had consensual sex. (10.07.2019)