Hundreds of women have taken part in a demonstration in Peru's capital, Lima, to draw attention to the problem of gender violence in the country. Peru has one of the highest rates of violence against women in the region. 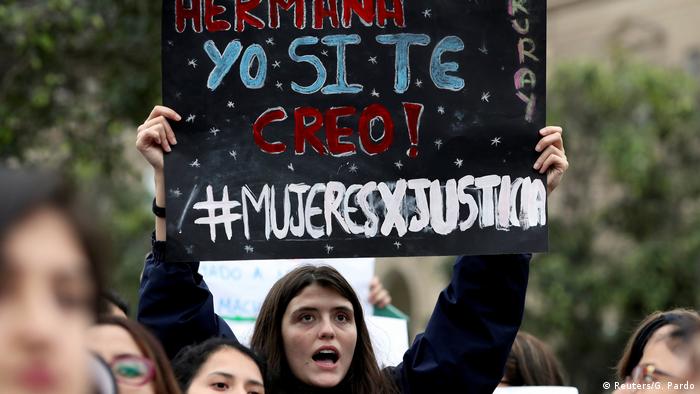 Hundreds of women took to the streets of Lima on Saturday to protest the crimes being committed against women and girls in Peru. The demonstration, organized by the collective Ni Una Menos (Not One More), has been the fourth such national march so far this year.

The protesters demand justice for victims of gender violence and measures by the government to protect women and girls.

Peru has witnessed 105 cases of femicide so far this year, according to official figures. The term femicide describes the killing of a girl or woman simply because of her gender.

"We are very dismayed by the figure of 100," Alejandra Ballon, the spokesperson of the collective Ni Una Menos, told the EFE news agency. "But including attempted femicides, the figure is about 250. In each case, there are parents, children, grandparents and a whole family that is affected and dismayed," Ballon said.

Read more: Violence against women is a universal problem

The activist also recalled that last year "there were more than 12,000 cases of rape and that, of those cases, 60% of the aggressors were family members."

"So we are talking about a gigantic problem and we are going to need years of struggle to achieve change," she said.

Ballon noted that the problem of violence against women "is so profound that a national emergency must be declared" to tackle it.

Read more: Discrimination against women is legal in 155 countries worldwide

A number of women's rights groups, student bodies and workers associations took part in the march. Gloria Montenegro, Peru's minister for women, and some political parties, such as the leftist New Peru party, also participated in the demonstration, which saw crowds march through the streets of downtown Lima and on to the Palace of Justice building, the seat of the country's Supreme Court.

Talking to RPP News, Minister Montenegro called on all citizens to denounce violence against women and girls. "We're working to prevent such crimes and to provide care to the abused women," she said.

Gender and domestic violence are serious problems in Peru, with many Peruvian women reporting instances of physical or emotional abuse.

Violence against women in the Latin American country occurs in all social strata and in both rural and urban areas.

But femicide is not specifically a Latin American problem. Women are subjected to violence in countries all over the world, across all cultures and social settings. But reported cases of femicide in Latin America are especially high.

Former Peruvian President Alejandro Toledo is wanted in his home country for corruption in connection with the sprawling Odebrecht scandal. (17.07.2019)