The mood was explosive as far-right populists staged a rally in the capital, and their detractors turned out en masse to shout them down. DW's Jefferson Chase ventured between the political frontlines.

Berlin was treated to the surreal spectacle on Sunday afternoon of the Brandenburg Gate once again serving to demarcate two Germanys.

On one side, some 5,000 supporters of the anti-immigration, anti-EU Alternative for Germany party (AfD). They congregated to express their discontent and often outright contempt for the policies of Chancellor Angela Merkel's government, particularly her welcoming stance toward refugees.

On the other side and in the surrounding Tiergarten park, over 20,000 opponents of the AfD. They turned out to vent their discontent and often outright contempt for what they consider to be a return to the xenophobia and racism of Germany's dark historical past.

In the middle, 2,000 police who managed to keep the two sides apart and ensure that the populists were able to hold their rally without a riot. And, of course, we journalists charged with reporting with some degree of neutrality about political differences of opinion that have long become cultural divisions within Germany.

The sense of threat as a main motivator

The day began at Berlin's main train station where AfD supporters collected to hear speeches and assemble before marching the 1.3 kilometers to the Brandenburg Gate. Few of the demonstrators wore clothing or carried placards associated with right-wing extremists. This was very much the middle-class face of the AfD, self-described hard-working taxpayers who feel ill at ease in multicultural Germany and accuse the government of betraying their interests.

Anxiety over foreigners, hostility toward elites and patriotism were the themes recurring in the chants of the AfD crowd and the speeches held on the stages. One of the first speakers, 21-year-old Marie Thérèse Kaiser, spoke of her fear when encountering groups of Arab-speaking migrants on the train in her hometown.

"I felt powerless," Kaiser said, before going on to list the names of German women allegedly raped by refugees, although she also admitted that the men on the train probably had not intended to be threatening and said that her best friend is Turkish.

No one in the audience seemed particularly interested in exploring the potential contradictions of such attitudes — and a mass rally would probably not be the appropriate forum anyway. For the right-wing populists, the answers to what another speaker called "the currently so threatening situation" in Germany are clear. Merkel should go, the country has to close its borders to undesirable foreigners, and the rule of law and order must be restored.

The latest police statistics show that crime is actually declining overall in Germany. But for the AfD crowds in Berlin that's not the point. It's the sense of being under threat and not any objective proof that made these people take to the streets.

Another thing made clear at the rally was that the AfD is every bit as much a citizens' movement as a political party in the sense post-war Germans are familiar with. Anti-elitism is at the core of the AfD's message and appeal — even if that leads to some internal frictions.

"As long as those above kick down at us below, we'll be kicking back at those above," an agitated supporter in the crowd shouted at a TV crew — only to be scolded by a fellow party member. "Stop hopping in front of the cameras every chance you get," he was told.

In general, the AfD rank-and-file busy waving the red-gold-and-black German flags organizers had handed out were surprisingly willing to share their thoughts with the media they often accuse of treating them so unfairly. For many AfD adherents, disrupting the status quo of how the government, the media and other social institutions function is perhaps more important than changing any individual laws or policies.

"The AfD and the citizens' protest movement belong together," said Christoph Berndt, the leader of the anti-immigration citizens' initiative Zukunft Heimat, told the approving crowds. 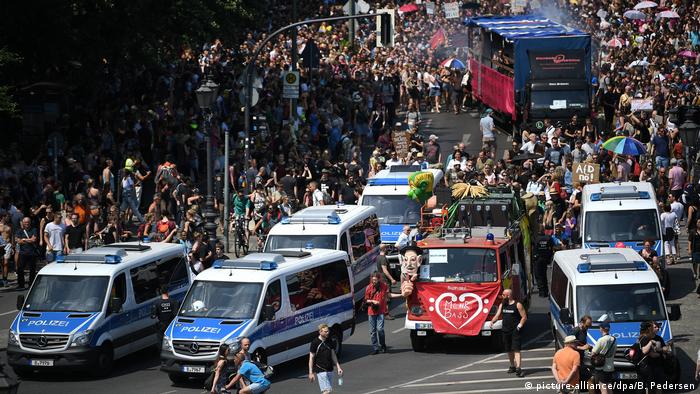 The counter-protestors outnumbered the right-wing populists four to one

Meanwhile some three hundred meters away from the train station, across the Spree River, thousands of people chanted "Nazis out" and "All Berlin hates the AfD" as the populists began moving toward the Brandenburg Gate. Thirteen counter-demonstrations were registered with the authorities, and police reckoned that opponents of the AfD outnumbered supporters by more than four to one.

Representatives of Berlin's famous dance club culture had promised to "bass away the AfD" by drowning out the right-wing populist speeches with ultra-amplified techno music. But that didn't happen either at the main train station or the Brandenburg Gate.

Instead it was down to the collective lung power of individual anti-AfD protesters to provide the aural disruption. Populist supporters directly in front of the main stage as AfD co-leaders Alexander Gauland and Jörg Meuthen repeated party slogans probably didn't realize how many people had turned out against them.

But a few hundred meters back from the stage the volume of the protesters was as loud as that of the speakers. And the AfD by no means have a monopoly on naked hostility toward opponents. I found that out when I strayed too near to the counter-protesters while wearing my press ID card dangling from a red-gold-and-black band — ironically a souvenir from Germany's Federal Office for the Protection of the Constitution — and got spat at.

"I asked myself whether we shouldn't be trying to make more substantive statements concerning policy," a rather more collected counter-protester on the other side of the Brandenburg Gate told me. "But in the end, probably all that you can do at events like this is make a lot of noise."

A functioning democratic society, it is often said, must allow all opposing sides of issues to make their views heard. If so, the competing demonstrations in Berlin, which ended with only some minor scuffles, were a mark of democracy at work. At the same time, though, in terms of content, Sunday afternoon was little more than a mass shouting match. One that illustrated just how hardened the fronts in Germany have become, when the issue is Merkel's policies on refugees.