Berlin braces for pro- and anti-AfD demonstrations | Germany | News and in-depth reporting from Berlin and beyond | DW | 25.05.2018

Thousands of supporters and detractors of the right-wing populists will confront one another in the German capital on Sunday. The situation is sure to be tense, and no one is ruling out violence. 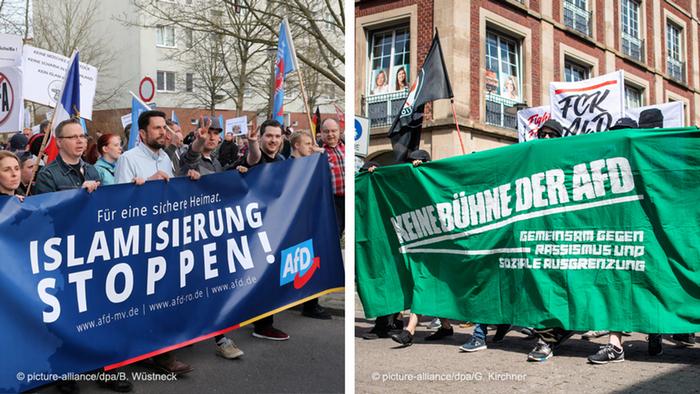 To see how explosive the situation could potentially be in Berlin this weekend, you need only look at a map of the possible demonstration routes.

The far-right populist Alternative for Germany (AfD) party hopes to attract as many as 10,000 supporters to Berlin's main train station on Sunday. From there they plan to march a little over one kilometer (0.62 of a mile) to the western side of Brandenburg Gate, where party co-chairmen Alexander Gauland and Jörg Meuthen are scheduled to address the demonstrators.

That's if those demonstrators get there. An alliance of AfD opponents, including politicians, migrant-advocacy groups, theaters, dance clubs, gay and lesbian groups, trade unions and Berlin party people, have vowed to turn out in even greater numbers and prevent the right-wing populist march. As the week drew to a close, anti-AfD activists had applied for permits for at least thirteen counter-demonstrations and other events.

The largest of them is scheduled to take place in front of the Reichstag, more or less directly across the river from the train station. Another demonstration is planning to march to the eastern side of the Brandenburg Gate. 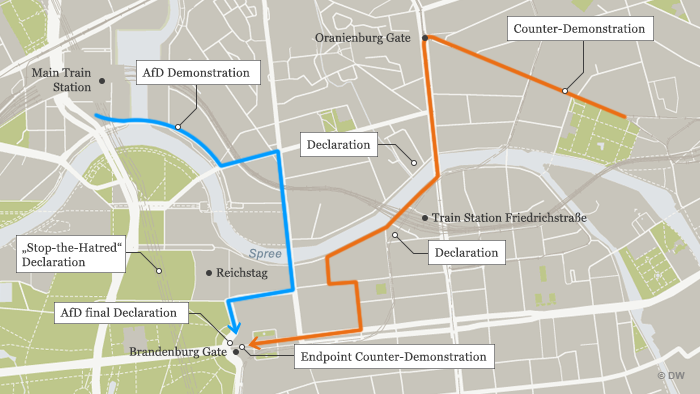 The planned demonstration routes lead to a head-to-head confrontation

Police say that the routes will only be finalized on Sunday morning. They add that the number of officers deployed to prevent violence between the two sides can only be determined when the number of participants is clear. They say their priority is to ensure that everyone can exercise their constitutional rights to assemble and make their views known.

As Germany's capital and its largest city, Berlin is no stranger to mass political events. But the rival demonstrations planned for Sunday are a novelty. And neither side is ruling out the chance that things might get physical.

A new concept for a party?

"It's not going to be any picnic," said the main organizer of the AfD demo, Guido Reil, at the party's press conference ahead of the event.

Reil says that the populists want to voice their discontent at Chancellor Angela Merkel's welcoming stance toward migrants, the transfer of powers from the national to the EU level and the growing gap between rich and poor in Germany.

A muscular fellow and miner by trade, Reil accuses the AfD's left-wing opponents of threatening violence and trying to prevent a democratically elected party for having its say. He and other AfD leaders say that extremist groups like the "identitarian movement" are not welcome at their demonstration, and that banned right-wing extremist banners, symbols and chants will not be tolerated. 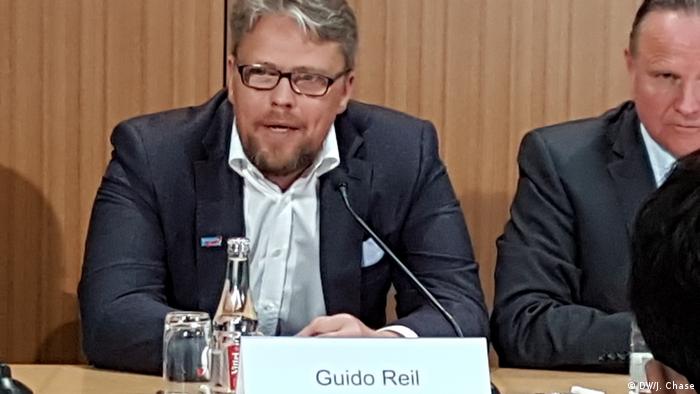 It's highly unusual for a political party represented in the Bundestag to stage a rally of this sort when there's no election on. Critics say that this is an example of the AfD's character as a "movement party" – a term that alludes to Nazism, which was as much a popular movement as a political party.

Reil says that Sunday's rally is an example of how the far-right populists differ from the established forces in postwar Germany's political landscape.

"We're an alternative party, and that's why we do things differently than the old parties," Reil told reporters. "Parallel (to parliament), we take to the streets and give our members and supporters the chance to actively participate. That's very important. Because we're alternative. It's a new concept."

Reil added that he hopes marches like the one planned for Sunday will become annual events and that the number of people taking part will grow. 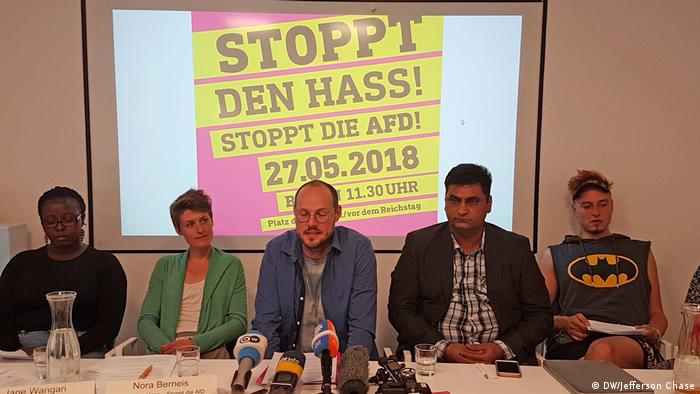 'Not a single step'

That's something that Nora Berneis, one of the main figures behind the umbrella organization "Stoppt den Hass" (Stop the Hatred), wants to hinder. The human rights activist says that she hopes to physically prevent the AfD march.

"We want to attract so many demonstrators that the AfD won't be able to take a single step," Berneis told Deutsche Welle, adding that her umbrella organization, which includes more than 120 groups, was willing to engage in "civil disobedience" to achieve their ends.

Berlin police say they have a responsibility to ensure freedom of movement on both sides to events that have been granted legal permits. But in cases where masses of people represent a safety risk, police have leeway to determine whether demonstrations should be allowed to proceed as planned.

Berneis says the strategy of physical blockage has worked before, specifically in February when left-wing protesters succeeded in halting a right-wing demonstration purportedly for the rights of women.

There will also be a protest on boats on the Spree River and on trucks sponsored by Berlin's famous nightclubs.

105 decibels against the AfD

The group Reclaim Club Culture, which includes 120 clubs, event promoters, festivals and "party crews," plans to disrupt the AfD's final declaration sonically by blasting electronic music near the Brandenburg Gate. The motto of the action is "bass away the AfD," and organizer Rosa Rave doesn't mince words.

"We'll be giving it everything we have on Sunday, which means we'll be bringing massive amounts of loudpeakers with massive amounts of bass," Rave told DW. "We'll be turning out lots of people, and we're looking forward to protesting with them, loudly and confidently, and to confronting the Nazis from the AfD and their supporters."

When asked how loud those loudspeakers would be, Rave said with a grin "105 decibels." Reclaim Club Culture said that they were expecting to draw 14,000 anti-AfD ravers on their own and that they would be trying to convince people to go straight from clubs to protest locations.

AfD organizers have been scornful of the leftist protests being organized against them, although Reil did admit that he thought the idea of using electronic music was creative. That was the only nice thing the right and the left were saying about each other, as Berlin prepared for a unique showdown of rival demonstrations.