Viktor Orban and Mike Pence are among the conservative leaders and thinkers from around the world meeting in Budapest to "defend" the notion of the nuclear family from "left-wing" attacks. 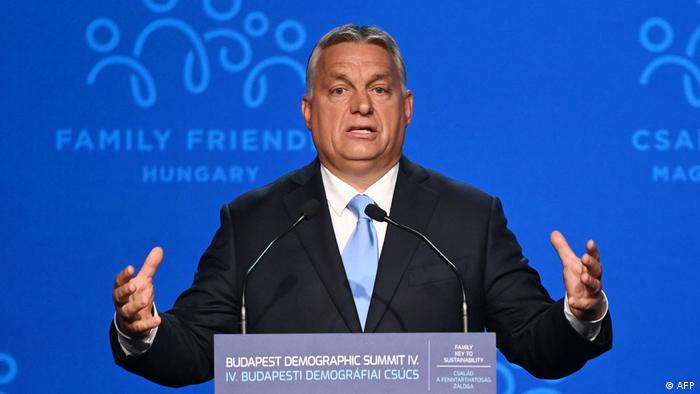 Conservative leaders and thinkers from across the globe met in Budapest on Thursday to give speeches on demographic change and "family values."

What did the right-wing figures say during the summit?

Speakers at the two-day conference railed against migration and LGBTQ people, and called for Christian couples to have more children.

"Hungary must defend itself because the Western left wing is attacking," Orban said at the summit. "It is trying to relativize the notion of family. Its tools for doing so are gender ideology and the LGBTQ lobby, which are attacking our children."

"We see a crisis that brings us here today, a crisis that strikes at the very heart of civilization itself. The erosion of the nuclear family, marked by declining marriage rates, rising divorce, widespread abortion and plummeting birthrates," he said.

Pence said he wished that the conservative-majority Supreme Court in the US would soon overturn abortion rights.

French polemicist Eric Zemmour, a possible challenger to President Emmanuel Macron during next year's election, praised Orban before the conference. He told French news station CNews on Tuesday that Orban "defends the identity of his country and therefore that of Europe."

Orban, along with the prime ministers of Poland, the Czech Republic and Slovenia, endorsed a joint declaration on Thursday saying immigration is not the solution to a falling birth rate in the EU.

"Increasing the number of European children is essential to preserving Europe's Christian culture and other religious traditions for future generations," the statement said, while adding that "migration should not be seen as the main tool to tackle demographic challenges."

The summit in Budapest comes amid high tensions between the Hungarian government and EU authorities in Brussels.

The UK-based Financial Times newspaper reported Wednesday that the EU could withdraw "cohesion funds" from Hungary and Poland due to human rights abuses.

Hungary implemented a controversial law in July that banned the depiction of LGBTQ people in school material and television programs for people under 18. European Commission President Ursula von der Leyen has called the law "shameful."