A diverse cast of political parties from the left, liberal and even far-right have come together in an alliance that hopes to build on the success of municipal elections in 2019. 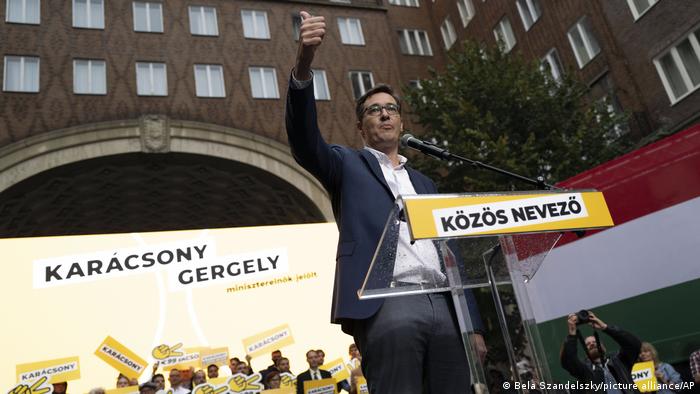 Hungary's opposition parties began a primary process on Saturday, with the hopes of choosing candidates that can unseat Prime Minister Viktor Orban and his party in next year's elections. The country's six opposition parties vowed to put ideological differences aside and coordinate their candidates, after more than a decade of bitter losses to Orban.

The mayor of Hungary's capital Budapest, Gergely Karacsony, was one of five candidates who are running to face Orban in the prime ministerial race.

Karacsony addressed supporters on Saturday at a campaign rally, vowing to "liberate'' the country from the right-wing populist leader and saying that said next spring's elections would be "a celebration, rather than a mockery, of democracy.''

Hungary's opposition has accused Orban of endemic corruption and creeping authoritarianism since he came to power in 2010. Orban has repeatedly clashed with the EU on matters of migration, LGBTQ rights and rule-of-law issues.

The 59-year-old prime minister has enjoyed wide support in recent years and his party Fidesz currently holds a two-thirds majority in parliament.

But after Fidesz swept national elections in 2018, independent election observers found the contest had been free but not fair, adding that "intimidating and xenophobic rhetoric, media bias, and opaque campaign financing [had] constricted the space for genuine political debate.''

Their six-party opposition alliance, set up last year, is made up of a diverse cast of political parties including leftist, liberal and formerly far-right groups. The alliance hopes to build on the success at municipal elections in 2019, when a unified strategy delivered surprise wins in Budapest and several cities in what was seen as the first blow to Orban and Fidesz.

"There are very many of us opposition voters who have long been waiting for the opposition parties to not want to defeat each other, but Viktor Orban,'' Karacsony said. He promised to pool diverse cross-party support to defeat Orban, something he did in 2019 when he won the Budapest mayoralty.

"The opposition can only compete with Fidesz if they are in a single bloc too, we've learned that the hard way," Antal Csardi, a candidate for the green LMP party, told the AFP news agency.

Adjusting to a winner-take-all system

Fidesz authored and unilaterally passed an election law in 2011 that changed the country's electoral system from a two-round process to a single-round, winner-take-all system. The new law also reduced the number of parliamentary seats by nearly half. Critics said these changes unfairly favor the ruling party.

In 2012 and 2018, Fidesz won powerful parliamentary "supermajorities," despite winning less than half of the vote.

The opposition's primary contest will allow opposition voters to select single candidates to take on both Orban himself as well as Fidesz rivals in each of Hungary's 106 electoral districts.

More than 250 candidates are standing in the primaries nationwide, which will run from September 18 to 26, with voting taking place online and in-person. If required, a run-off for the prime ministerial candidate will be held between October 4-10.

Opposition leaders say the primary elections that yield unified candidates are the only hope of seeing an anti-Fidesz candidate win in a winner-take-all system. So far, some Fidesz candidates without the support of a majority of voters entered office due to an array of candidates splitting the opposition vote.

While polls so far indicate an unpredictable parliamentary election for the first time since Orban came to power, they also show the unified opposition and Orban's party in a neck-and-neck race.

Observers say next year could be the closest election in Hungary's recent memory.