Euroskeptic Hungarian Prime Minister Viktor Orban has won a third term in office, and his Fidesz party will hold a two-thirds majority in parliament. Orban's campaign focused heavily on an anti-immigrant sentiment. 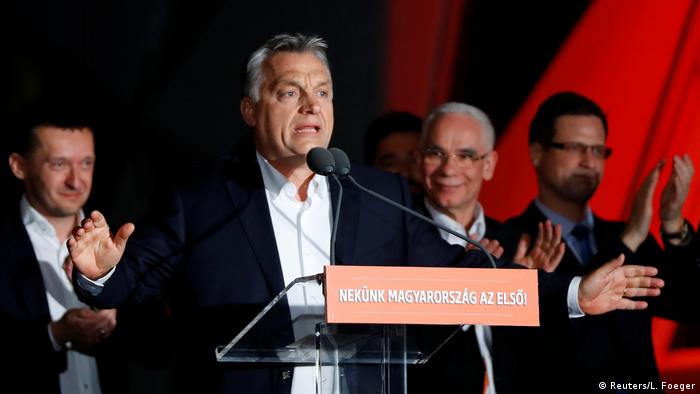 Prime Minister Viktor Orban's party, Fidesz, came away victorious in Sunday's parliamentary elections, receiving 48.8 percent of the vote according to preliminary results. With 98 percent of ballots counted, Fidesz has won a two-thirds majority in parliament, with a projected 133 seats of the 199 seats in the chamber.

After the 2014 elections, Orban pushed through sweeping changes to the electoral system so that some 53 percent of parliamentary seats - 106 of a total of 199 - are won on a "first-past-the-post" basis in individual constituencies, allowing for a two-thirds majority with less than 50 percent of the vote garnered.

The 54-year-old Hungarian prime minister, the longest-serving Hungarian leader since the fall of communism, led an electoral campaign that positioned him as a defender of Hungary's Christian culture against Muslim migration.

A significant victory for Orban

Orban celebrated his party's gains in a speech to his supporters, shortly after the preliminary results were announced.

"Dear friends, there's a big battle behind us, we secured a historic victory - we got a chance, we created a chance for us to protect Hungary," the Hungarian premier said. Orban then culminated his short address by leading the crowd in singing "Long Live Hungarian Freedom," a song from the country's 1848 revolution.

Hungary's Nationalist Jobbik party came in a distant second with roughly 20 percent of the vote and the Socialist Party received 12 percent. Two other parties, the Democratic Coalition and the green Politics Can Be Different parties are expected to surpass the 5 percent threshold and will join the legislative body.

Jobbik's result prompted the resignation of its chairman, Gabor Vona. "Jobbik's goal, to win the elections and force a change in government, was not achieved," Vona said in a news conference. "Fidesz won. It won again."

Some 8 million Hungarians were eligible to vote for 199 lawmakers, with 106 directly elected according to electoral districts and 93 elected from countrywide party lists. Sunday's election registered a turnout of 69 percent, seven points higher than that of the 2014 parliamentary elections.

The parliamentary elections in Hungary were closely monitored across Europe, as Orban has had a troubled relationship with EU institutions due to his rejection of the bloc's refugee resettlement scheme and what many see as his attacks on civil society, the media and the country's institutions.

Polling stations have officially closed in a key vote for Hungarian Prime Minister Viktor Orban, who is widely expected to win a third consecutive term in office. Turnout was just over 68 percent by the late afternoon. (08.04.2018)

EU wants to hit Hungary's Viktor Orban where it hurts: The wallet

Viktor Orban's increasingly authoritarian tendencies have frustrated the EU. As Hungary enters a national election, could Brussels be preparing to pull the financial rug out from under the right-wing prime minister? (08.04.2018)