EU wants to hit Hungary′s Viktor Orban where it hurts: The wallet | Europe | News and current affairs from around the continent | DW | 07.04.2018

EU wants to hit Hungary's Viktor Orban where it hurts: The wallet

Viktor Orban's increasingly authoritarian tendencies have frustrated the EU. As Hungary enters a national election, could Brussels be preparing to pull the financial rug out from under the right-wing prime minister? 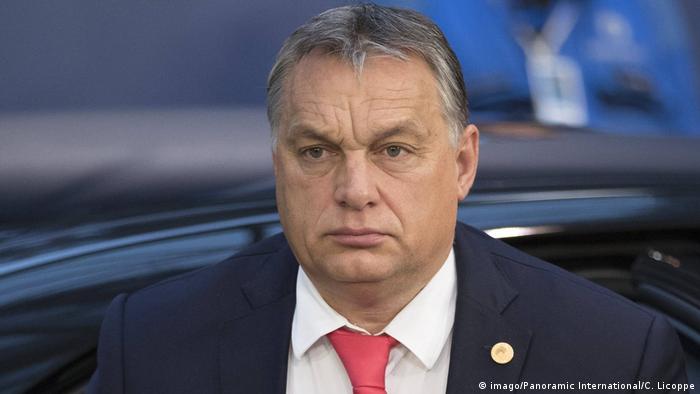 Few in Brussels doubt that Prime Minister Viktor Orban's national-conservative Fidesz party will be victorious in Sunday's Hungarian elections. The European Union is bracing for another four years of Orbanism, as diplomats in Brussels call Hungary's shift toward authoritarianism and its permanent opposition to the EU mainstream.

The European Commission has been observing Orban's massive push to restructure Hungary's government, justice system and media landscape since 2010. It has launched a number of so-called infringement of contract proceedings in an effort to correct Hungarian laws that violate EU law.

Orban made a number of concessions after facing the threat of an Article 7 procedure, which, according to the EU Treaty, allows Brussels to suspend certain rights of member countries. Nevertheless, Orban's relationship with the European Commission remains strained.

The Hungarian government refuses, for instance, to implement a European Court of Justice (ECOJ) decision demanding it accept refugees. Orban often speaks of "EU dictates" and incites against an "infiltration by Islamic invaders" and "Merkel's refugees" on the campaign trail.

Orban rails against the EU but takes its money

The harsh words bellowing from Budapest baffle many EU politicians. Hungary has consistently been one of the biggest recipients of EU development funds since it joined the bloc in 2004. Over the last decade, Brussels has pumped some €34 billion ($42 billion) into Hungary. Many ask: "Why is Orban biting the hand that feeds him?"

That hand not only feeds Orban, it also feeds many in his extended family. The EU's anti-corruption agency, OLAF, released a report in January that claimed a company belonging to Orban's son-in-law regularly received huge sums of EU development funds.

The OLAF report cited what it called "grave irregularities and conflicts of interest." As a result, Hungary could be forced to repay €43 million in EU funding.

Opposition newspapers in Hungary regularly run reports on a web of corruption in which Orban's brother and father are said to be involved. The Pester Lloyd newspaper claims that Orban is enriching himself as well, possibly through the sale of so-called golden visas, which essentially allow wealthy foreigners to attain EU residency by buying Hungarian sovereign bonds.

In December, the European Commission once again filed suit against Hungary before the ECOJ in Luxembourg. This time it did so to challenge a Hungarian law it claims illegally limits the ability of nongovernmental organizations to work in Hungary.

The law is aimed, above all, at Hungarian-American investor and philanthropist George Soros, whom Orban has declared a personal enemy because of the billionaire's liberal politics. Orban has gone so far as to use anti-Semitic language when mentioning Soros on the campaign trail, describing a faceless, international enemy who prefers financial speculation to work.

Hungarian voters do not seem to be bothered by the actions that set off alarm bells in Brussels, however. According to a recent poll taken by an Austrian sociological institute, 88 percent of all Hungarian voters said they wanted "a strong man to lead the country."

Who could fit that bill better than Orban? The Hungarian populist is only too happy to stand with other global strongmen like Russian President Vladimir Putin and US President Donald Trump.

So far, the EU has been unable to stop the erosion of the rule of law in Hungary. Orban has always gone as far as possible under EU law but no further. "Existing EU instruments have proven rather ineffective until now," says Martin Michelot of Europeum, a Prague-based think tank.

The EU cannot interfere with the inner-structure of a member state, nor with its constitution. It can, however, examine whether a member state is upholding the rule of law.

To date, Hungary has always managed to scrape by the threat of Article 7 proceedings. Yet, the European Parliament, at the urging of the body's liberal bloc, wants to try its luck one more time. A comprehensive report on Hungary's transgressions is currently being compiled.

That said, the road to criminal proceedings is long and will require a majority vote in parliament. In Brussels, Viktor Orban's Fidesz party is a member of the conservative European People's Party (EPP). The EPP is by far the largest voting bloc in the European Parliament and, until now, has refused to publicly rebuke Orban. Quite the opposite in fact: Recently, the EPP's group leader, Manfred Weber of the Christian Social Union (CSU) — the Bavarian sister party of German Chancellor Angela Merkel's Christian Democratic Union (CDU) — unabashedly campaigned for Orban's re-election in a Hungarian tabloid newspaper.

EU Budget Commissioner Günther Oettinger realized long ago that the only way to rein in Hungary would be to hit it where it hurts: the wallet. At a summit meeting in February, a number of EU heads of state and government voiced support for a proposal put forth by Oettinger. He suggested that in the coming EU budget all funding payouts be tied to rule of law criteria. European Commissioner Frans Timmermans, for one, is always happy to point out that participation in the single market is contingent upon upholding the rule of law. 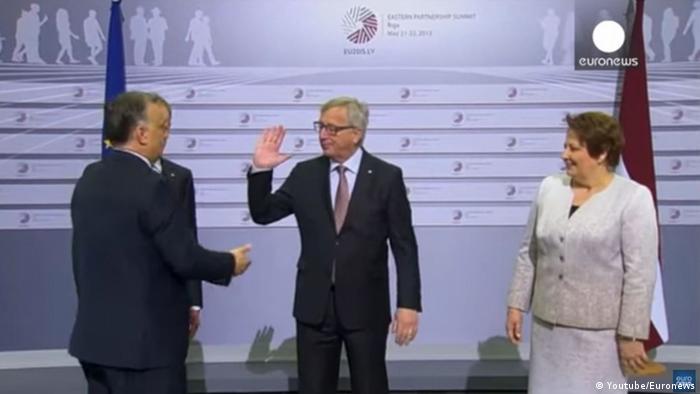 'Dictator!' Juncker famously said to Orban with a smile when greeting him back in 2015

Oettinger also put forth a second proposal in which he, like Germany's government, seeks to deal with refugee and asylum aid through the EU budget. That would mean that only those EU countries that actually take in refugees would receive funds. Hungary, Poland and other countries have voiced vehement opposition to the proposal.

The problem with the proposal is that any new EU budget rules must be unanimously approved. "During negotiations over the 2021-2027 budget, net contributors will have to find a way to put pressure on the troublemakers," says an EU diplomat in Brussels who wishes to remain anonymous.

Currently, the European Commission is still looking for a way to find a compromise that will also allow Orban to save face. The president of the European Commission, Jean-Claude Juncker, is said to have a good relationship with Orban. The Hungarian prime minister calls Juncker the "grand duke" in reference to his Luxembourg home. In 2015, Juncker took to ribbing Orban, greeting him with the word, "dictator!" Back then, both of them were still laughing.